It’s impossible to convey just how much fun can be had at Macworld Expo, but darn it, we’re going to try, with these brief snapshots of clever events, cool demos, and neat people.

Most Pervasive Tchotchke — The giveaways seemed pretty sparse at Macworld Expo this year, but one freebie stood head and shoulders above the rest, literally. Peachpit Press was giving away free bunny ears to promote the Visual QuickStart Guide bunny logo. Wearers could win iPhones and iTunes gift certificates. Although it was a clever idea, even Peachpit’s staff were amazed at how popular the fuzzy pink ears turned out to be. They gave away over 700 pairs of ears in the first few hours of the show, and ran out of a subsequent 300 pairs the next day. You could see bunny ears not only on the show floor, but in restaurants surrounding Moscone. Interestingly, Peachpit
chose not to put their name on the ears, thus forcing everyone who wanted a pair to ask where they’d come from. [JLC] 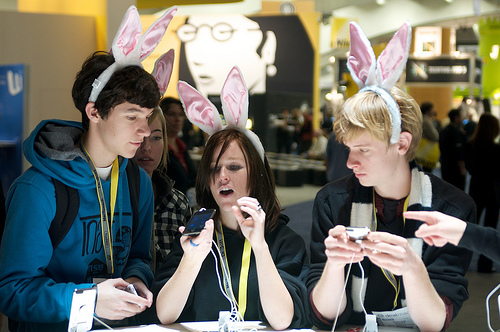 Best Audience Participation — DriveSavers, the folks who can disassemble crashed drives and often extract their vital data, had a nifty demonstration where they drafted a passer-by to act as a “disk doctor.” I was walking by and the DriveSavers booth staffer had equipped what appeared to be a regular attendee as a clean room technician, and used the Socratic method to elicit responses as he helped the “doctor” disassemble a sealed drive mechanism. A microphone and speakers allowed observers to hear what dust spinning on a drive does to the read/write heads as the specks bang into them. Remember, we love what the DriveSavers folks do, but they’ll be the first to
encourage you to back up instead, since their services aren’t cheap. [GF] 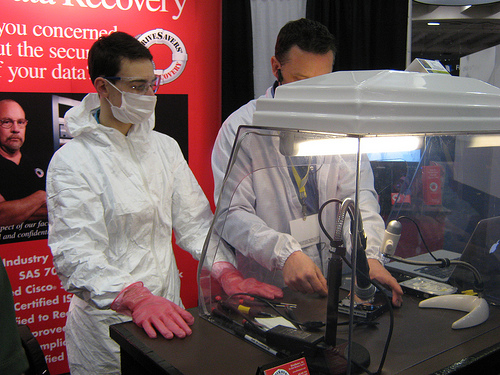 Best CHOCK LOCK — The 100-foot-tall Craig Hockenberry, who strides the floor of Macworld Expo like a colossus, is a very funny man, as well as one of the principals of Iconfactory, most recently known for the desktop and iPhone/iPod touch versions of Twitterrific and Frenzic. Hockenberry, seen here crushing Bare Bones founder Rich Siegel (himself 99 feet tall) into the show floor, has spread a hilarious meme via Twitter about the CHOCK LOCK, a morphable description of practically any behavior. [GF] 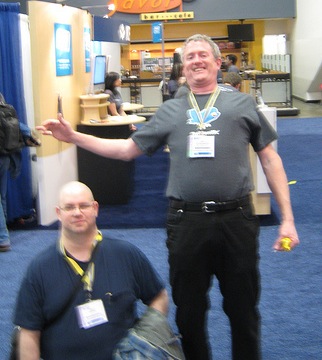 Largest Digital Project — Artist Bert Monroy described his latest project to me at the Peachpit Press party: It’s a 25-foot-long photo-realistic mural he’s creating in Photoshop that’s so large and complicated he expects to spend another two and a half years working on the project – and has already stretched the limits of Adobe’s Creative Suite products to the breaking point. Monroy’s source file is over 11.5 GB flattened, and his next steps will quadruple the current file size. [GF]