While I’ve been laid up in bed, I’ve taken the opportunity to set up Google’s Gmail to retrieve a copy of every message I receive at my main email address via POP, leaving the messages in place so I can also retrieve them via Eudora as I do normally. I wanted to give Gmail a real-world test, and since I can also configure Eudora to access my Gmail account via IMAP, I can manually sync up work done in one place with work done in the other if I decide to move entirely to Gmail or to refocus on Eudora. Of course, my other goal was to be able to access my email on the iPhone.

But even in the short time I’ve been testing Gmail, I’ve been annoyed to see its “Still working” status banner appear when, for some reason or another, my browser couldn’t connect with Gmail. The problem has always resolved quickly enough, but there are plenty of times when I’m in an airport, on a plane, or just somewhere where there isn’t Internet access. (I realize this may come as news to those who live in large cities, but in most of the world by area, Wi-Fi connectivity is difficult or impossible to find, and even cellular connectivity is often flaky or nonexistent.) In such situations, Gmail has been, well, completely useless. It can’t work for more than a moment or two without contact with the mother ship.

Luckily, Google has at long last announced Gears support for Gmail via a Gmail Labs feature called Offline. Google Gears is a technology that enables Web applications like Gmail and Google Docs (and apps from other companies too) to operate offline, storing changes locally and then resynchronizing them once you reconnect to the Internet (see “How to Use Google Docs Offline in Safari”, 2008-09-01); Offline ties Gmail into Gears.

Offline should now be available in the Gmail Labs tab for everyone. Needless to say, Google calls this “experimental” support, so it may not work flawlessly. Then again, Google hardly ever takes anything out of beta, so the fact that it’s public at all means they think it’s sufficiently functional.

Gears, which requires a separate install, needs at least Safari 3.1.1 or Firefox 1.5 running on Mac OS X 10.4.11 or later. Although that’s an entirely reasonable requirement, it will likely pose at least short-term problems for people who use a site-specific browser like Fluid or Prism, or the Gmail-specific Mailplane client, which I’m also testing. That said, while researching Mailplane’s compatibility with Gears, I heard via Twitter that the developer has created a theoretically Gears-savvy build of Mailplane, so hopefully he’ll be able to add Gears support to the
shipping version of Mailplane without much difficulty.

Now that Offline has appeared in my Gmail Labs tab, I’ve had a chance to give it a try. The installation process works as you’d expect. Assuming you have Gears already installed in Safari or Firefox, you click the Offline link in the upper right corner of the Gmail page. What’s next is interesting – Gmail evaluates your email volume and tells you how much recent mail it will download. 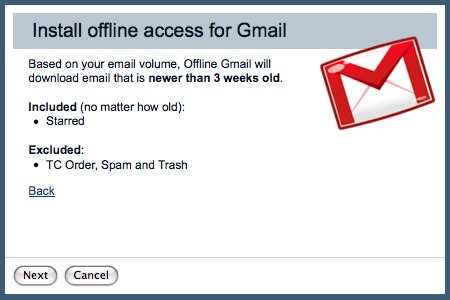 In my case, it told me that it would bring in mail received in the last three weeks (which is about as long as I’ve been using this account) but it wouldn’t synchronize my Spam or Trash mailboxes, reasonably enough. Nor would it synchronize mail to which I’d applied the TC Orders label – lots and lots of Take Control ebook order notification messages from eSellerate. There’s no control over what you can and can’t synchronize as far as I can see, and it’s clear that this makes offline access worthless as any kind of a serious local backup of your mail.

Once you’ve given Gears permission to store and access information on your computer (do this only on a computer you own, for obvious reasons), it starts the synchronization process. That can take a few minutes, but once it’s done, you can disconnect from the network and use Gmail much as you normally would, but with the addition of a little icon in the upper right that tells you your connection status: online, synchronizing, offline, and “flaky connection mode.” Synchronization takes place continually in the background, making it easy go offline any time you want. 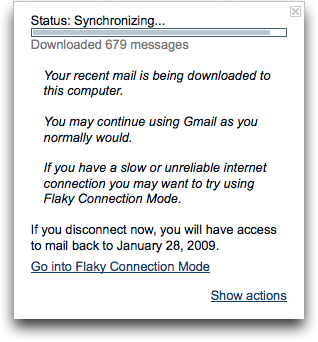 Flaky connection mode is interesting – you enter it manually by clicking the status icon and clicking Go Into Flaky Connection Mode. Once in that mode, mail will be read from your local database even if you’re online, which provides better performance if you have a slow or flaky connection. Gmail will continue to synchronize mail in the background when it can, and if it can’t, it will switch into offline mode entirely.

Not all things work the same offline. Most notably, there are no ads along the right side of the page, and certain Gmail Labs add-ons, like Canned Responses, don’t work, presumably because they load data only when needed. Many settings, such as filters, are also unavailable while you’re offline. But for the most part, I was able to read, write, and search through my email with no apparent loss in capability while offline, and other Gmail Labs add-ons, like the Quick Link box that stores frequently accessed searches, continued to work properly.

We’ll see how Gmail’s offline support continues to work in real-world usage, but for now it appears as though it will provide access to the messages and capabilities that most people need while working offline, if not one’s full email archive.