Google Earth 5.0, the latest version of the popular 3D earth visualization tool, unleashes several major new features and loads of additional content. New additions announced by Google include the capability to view 3D bathymetric maps of the ocean’s floor, thumb through historic maps and satellite imagery, explore the surface of Mars, and record journeys within Google Earth to share with other users.

The Oceans — While technically Google Earth has always included the oceans, until now that’s consisted only of an expanse of blue with low resolution shading to indicate varying depths. In the new Google Earth 5.0, you can dive below the ocean’s surface and explore the 3D terrain of the floor, as well as watch videos and gather information from various data points. The data points consist of text, videos, and links, which cover subjects ranging from animal tracking patterns and surf spots, to shipwrecks and historic expeditions. A great deal of this content is provided by National Geographic and Cousteau Ocean World. I had fun just plunging beneath the waters, crawling around, and randomly popping up to see
where I’d travelled. To activate the Oceans layer, check the box next to Oceans under the Layer section of the sidebar. 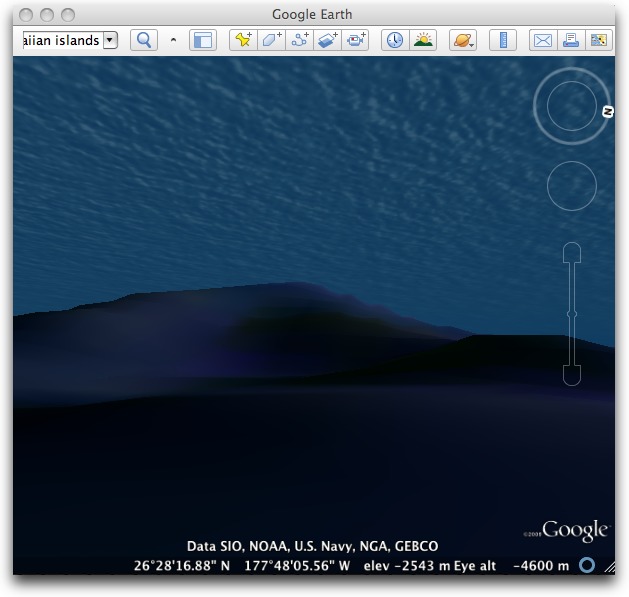 Historical Imagery — The next best thing to time travel, the new Historical Imagery feature enables users to view maps and photos of any given location throughout recent history. While the timeline is limited by the scope of Google’s image archive, for some locations this still means looking at imagery 60 or 70 years old. For most locations in the United States though, information appears to date back only as far the late 1980s at best. However, for the launch of version 5.0 the Google team did put together some historic data sets for San Francisco and Las Vegas which are definitely worth checking out. This new feature is loaded with potential, and provides an easy way to explore the development of
neighborhoods, cities, and the changing face of the environment. To activate the historic imagery feature, and its timeline slider, click the clock icon in the top menu bar.

Mars — Thanks to a collaboration with NASA researchers, Google Earth 5.0 introduces a new mode wherein users can explore the Red Planet. As one might expect, the 3D terrain imagery for Mars isn’t great, but Google does include other information such as significant landmarks, featured satellite imagery, day/night infrared shots, and excerpts from the book “A Traveler’s Guide to Mars.” To activate the Mars mode click and hold the, um, Saturn icon in the top menu bar and select Mars. 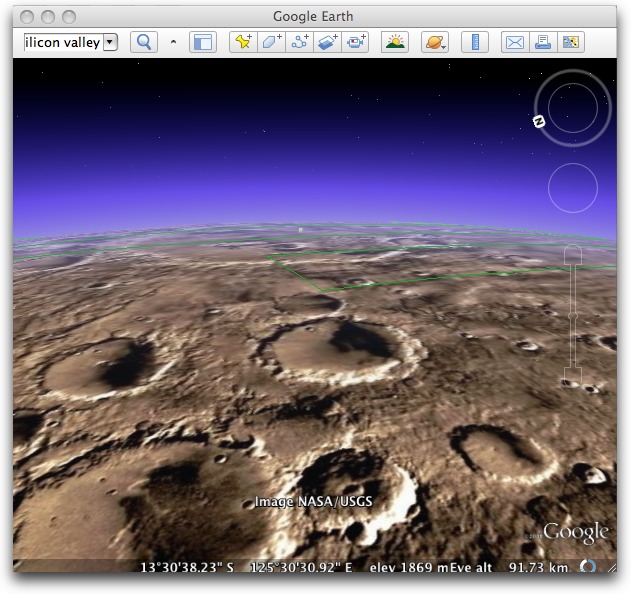 Touring — Designed to make Google Earth even more of a shared experience, the Touring feature enables users to record journeys within Google Earth, along with accompanying narration. Likewise, users can download and watch tours that have been created by others. Check out Google’s Lat Long Blog to find a handful of great Google Earth tours for download, including a Jimmy Buffett concert tour and a tour exploring the shrinking of the Aral Sea in Central Asia since the 1960s.

Unfortunately, the recording controls are fairly limited. For example, there’s no pause button, so tours must be recorded straight through from start to finish. Also, there’s currently no built-in way to export the file for viewing in a program other than Google Earth. Hopefully, in subsequent releases this feature will be further fleshed out as it might be nice to share these tours via YouTube or Facebook. To activate the Touring feature, click the movie camera icon in the top menu bar.

Google Earth continues to demonstrate a commitment to fun and interactive education with these excellent new features. Whether you’re a newcomer to the program or a veteran user, I highly recommend checking out version 5.0. It’s a 35 MB download, and is available from the Google Earth Web page.

One caveat – installing Google Earth 5.0 also requires that you install the omnipresent Google Software Update, which has generated complaints among those who want more control over what’s running on their Macs and when updates are downloaded and installed. At the moment, there is no supported method of disabling Google Software Update or running it only at specified times.