Recently my family took a three-week vacation overseas, and having left my computer at home (hey, it was a family vacation!), I needed a convenient way to store all the photos and videos that we were taking. Adam had written about this topic a few months ago (see “Backing up Photos While Traveling”, 2008-08-11 and “More Photo Backup Options While Traveling”, 2008-08-12) and since he had received a Digital Foci Photo Safe II for review after those articles appeared, he asked me to give it a real-world test.

The Photo Safe II is a lightweight (0.6 lb/272 g) portable photo storage device and memory card reader, and it proved a welcome traveling companion. With it, I was able to back up all our photos and videos as the trip progressed, copying them from our camera’s memory card every few days. I even had enough storage space to back up all the photos taken by the relatives who were traveling with us. And, although I didn’t use it to add data in this way, it can also work as a normal USB external hard disk (that’s how you move data from it to your Mac). 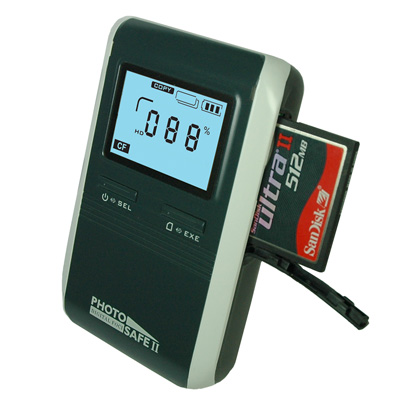 The Photo Safe II offers nearly foolproof backups. This is due to a variety of features, and assisted by the excellent Quick Start Guide which provides well written instructions, useful diagrams, and anticipates many user questions. Perhaps the most important of its features is that you can only delete photos from the device when it’s connected to a computer, effectively eliminating the risk of accidentally wiping out your entire trip’s pictures with the push of a button.

Further lessening that risk is the fact the Photo Safe II has only two buttons. One turns it on or off when held down, or, when pressed and released, toggles between pre-selecting the copy and delete functions. The second button then executes either copying (all) files from memory card to the device, or deleting (all) files from the memory card. The latter action is somewhat safeguarded by requiring you to hold down the button for three seconds. And again, once photos are loaded onto the Photo Safe II, there’s no way to delete them using only the device’s controls.

Complicating things just a bit is the fact that the two buttons offer a few other context-dependent functions. These include recalculating the available space and displaying information (the number of files copying and the target folder number) following a copy. The former is clearly displayed, making it easy to know just how much room you have left. That said, depending on how you’re using the Photo Safe II, you may find you don’t need to check it often. With the (now-discontinued) 80 GB model, even after I copied several thousand photos and short videos to it, it still had over 56 GB available at the end of my trip. Of course, if you’re also using the device as an external hard disk, a more capacious model might be required.

It’s important to realize that each time you ask the Photo Safe II to copy a memory card, it does a complete copy of the card and puts the data in a completely new, top-level, sequentially numbered directory, prefaced with the card type. Also important to realize is that the copy action copies everything, not just photos and videos, but all directory structures as well.

If you have one memory card, and you choose to make backups during your trip without deleting files from the card, the last file copy will contain the entire contents of your card. You can then ignore all the previous copies.

However, if you’re copying more than one memory card of the same type, you need to compare the contents of the device’s sequentially numbered folders to make sure you get the correct data (since they’ll all have similar folder names). Apparently it’s possible to pre-create partitions on the device’s hard drive, thus permitting you to separate the data coming from different cards of the same type, though I didn’t try this.

However, I did successfully use the Photo Safe II with a wide variety of point-and-shoot and SLR cameras that utilized the following memory cards: SD (normal and HC), Sony Memory Stick Pro MagicGate (High-speed), xD, and Compact Flash. The Photo Safe II also has slots for many other types, such as CF Type I (including Sandisk Extreme III, IV), MMC, SD/HC, miniSD, MS, MS PRO, MS Duo, MS PRO Duo, and xD.

During the trip, I connected the Photo Safe II to a PC running Windows Vista (someone else’s, of course) and it performed admirably as an external hard drive. In fact, I even took the opportunity to make a full copy of all our card copies to create yet one more backup of everyone’s photos and videos!

The Photo Safe II can also copy data from MS/SD/MMC/xD memory cards to a Compact Flash card. This would allow the risk-averse to create yet another level of backup. One could perhaps then mail full Compact Flash cards back home, or simply have enough peace of mind to delete the photos on the camera’s primary memory card.

The Photo Safe II can be powered with its included rechargeable battery, via the included AC adapter (sporting a small and lightweight wall plug that’s compatible with 100 to 250 volt power mains), or via USB. Additionally, both the AC adapter and USB can be used to recharge the battery within the unit, something that’s lacking in most cameras (sorry, just a pet peeve there). Included in the package is an unusual forked USB cable. One end has a mini-USB connector for connecting to the Photo Safe II, and the other end has a both normal USB connector for transferring data to a computer, and a second USB connector for delivery of even more power to the device, presumably to speed charging. Ingenious!

After a lengthy opportunity to explore the Photo Safe II, I’m left with only a handful of quibbles: When the device was connected to my Mac, I couldn’t see the data within the inserted memory cards, only the data on the device’s hard drive itself. However, according to the documentation, it’s supposed to function as a memory card reader.

Also, when powered by AC, I couldn’t get it to recognize the memory card. I had to pull the AC, turn it on with battery power, insert the memory card which would be recognized, and only then could I plug the AC in again and be fine thereafter.

Finally, and perhaps this was just an anomaly, at one point the device’s power indicator showed a single flashing bar when I was using just the battery, indicating a low battery. When I turned it off, and then back on, it indicated a full charge for quite some time.

Despite these minor quirks or aberrations, I highly recommend the Photo Safe II as the worry free means of backing up on the go. The Photo Safe II is currently available in 160 GB ($149), and 250 GB ($199) models, and can be purchased from Digital Foci’s Web site.

[Oliver B. Habicht is an IT director in the Cornell University Library. He’s still looking for a tiny and quick point-and-shoot digital camera that can charge via USB.]