Could the iPhone soon be able to track your location in the background as you walk around? A hint that such a capability is in the works at Apple comes from a programmer friend who spent some time spelunking around inside iPhoto ’09, which shows traces of being able to associate such GPS log data with photos.

That could provide geotagging information for photos taken with another camera, or it might let you view a map of your travels, with pins dropped where you’d taken photos with the iPhone.

My source points to an unused nib file within iPhoto as evidence of this feature. As you can see from the screenshot and the text below, it’s assuming that there’s a Location app on the iPhone, and that app must be running to transfer location data to iPhoto. 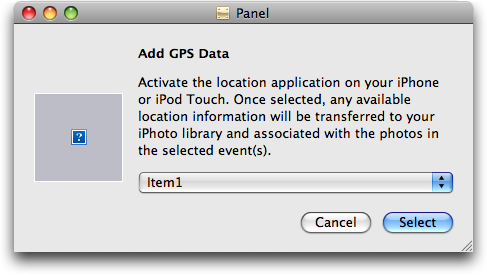 Activate the location application on your iPhone or iPod Touch. Once selected, any available location information will be transferred to your iPhoto library and associated with the photos in the selected event(s).

Elsewhere, in the iPhoto binary, there’s also this string, which appears to provide the iPhoto side of the directions:

Select an iPhone or iPod Touch from your list of named devices. Once selected, the appropriate information will be transferred to your iPhoto library and associated with the photos in the selected event(s).

The user experience seems rather convoluted, since the implication from these strings is that you would have to select one or more events in iPhoto, then launch the app on the iPhone to transfer location information via Wi-Fi. Quibbling with the interface is pointless, though, given that this feature is non-functional in iPhoto ’09, and there’s no known Location app in the iPhone with which to connect.

Setting the speculation phasers on stun, therefore, ponder the following:

In the end, there’s no guarantee that Apple has done more than toyed with the idea of garnering additional location-based data for iPhoto’s geotagging feature. Such a feature would need to be designed and introduced extremely carefully, to ensure that users had sufficient control over it to avoid privacy concerns, and to ensure that the messaging around the app didn’t give the wrong impression. Given that many of the marketing blurbs for the GPS data logging devices gleefully suggest privacy-infringing uses like spying on a teenager, spouse, or employee, caution on Apple’s part seems entirely warranted.

iPhone, iPad, & iOS Opinion Productivity Security
Cookies & Privacy: We wish we were talking about chocolate-chip cookies here, but our Web site—like nearly all others—relies on a few minor digital cookies. Various laws around the world require us to tell you that fact, so consider yourself informed, if not nourished. By continuing to use this site, you agree to our use of these cookies. Cookie and Privacy Notice