After learning our lessons the hard way, we at TidBITS are adamant about backing up our data and evangelizing the importance of having good backups. (For examples, see Adam’s article “International Verify Your Backups Day,” 2009-02-13, Joe’s ebooks “Take Control of Mac OS X Backups” and “Take Control of Easy Backups in Leopard,” and my own travails and successes recovering the contents of a failed hard disk, “DriveSavers to the Rescue,” 1999-08-30.)

But making copies of bits isn’t the only consideration for keeping your data intact. You need electricity to feed your computer and hard drives – and that electricity needs to keep running, especially in the event that the power goes out unexpectedly. An abrupt shutdown can cause disk directory corruption, and power surges risk overloading and damaging power supplies.

I was reminded of these facts recently when I was interrupted by a shrill and sudden beeping from beneath my desk. A dreaded red light appeared on the UPS (uninterruptible power supply) into which my computer and accessories are plugged, indicating that its battery was dead.

If you’re not familiar with the device, a UPS is essentially a multi-plug power strip with a built in battery that can keep electricity flowing for several minutes in the event of a power outage. It also provides protection from power surges and filters the incoming power to reduce fluctuations. In my case, I was using an old APC Smart-UPS 1000 I inherited from Glenn Fleishman when he stopped running Web servers out of our shared office.

The good thing about a UPS is that you can replace the battery without replacing the whole unit. So I went to APC’s Web site and discovered that it would cost about $150 for a new battery.

While browsing APC’s other offerings I came across the company’s Trade-UPS program. APC will give you credit toward buying a new UPS, and also recycle your old one and pay for the shipping. The last item is significant, since UPSes are quite heavy (the Smart-UPS 1000 weighs 46 pounds).

I entered my UPS and its serial number in the Trade-UPS page, which gave me a point value of 1000; I would need to match that number in new products to qualify for the discount and free return. The Smart-UPS 1000 was built for a rougher load than what I was using it for, so I figured I could get by with a UPS that didn’t offer as much capacity. But how to tell just how much I needed?

Once again, TidBITS search to the rescue! Adam wrote about buying a UPS in 1999 (see “Don’t Interrupt! A UPS Saves the Day, 1999-09-20), in which he explained how to calculate the electrical load your computer system will place on the UPS when the power fails:

[L]ook on the back or bottom of each of your devices for power draw ratings in either amps or watts. If power draw is listed in amps, multiply it by your line voltage (120 volts for North America, 230 volts for Europe, etc.) to find the volt-amp (VA) load. If the power draw is instead listed in watts, multiply by 1.4 to find volt-amps. The problem with this manual calculation is that manufacturers tend to be conservative and publish the maximum power draw possible, which would in turn cause you to buy a larger UPS than necessary.

Adding up the devices in my home office, I came up with a total of 1102 volt-amps. Not all of those were plugged into the Smart-UPS 1000 (which has a VA rating of 1000), but the number gave me a reference for what to look for.

Going back to the list of recommended new products, I decided to buy two smaller-capacity UPSes. I chose the Back-UPS LS, which has a model that is rated between 500-700 VA. With the trade-in discount, I was able to buy each for $128 (instead of the $140 list price). 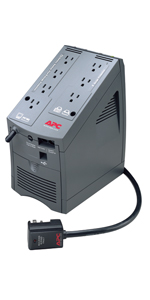 Although I ended up paying almost $300 (with tax and shipping), instead of $150 to replace a battery, I now have two UPSes that allow me to plug in equipment that previously was just in a power strip and add more components if needed. And the Smart-UPS 1000 (along with an older, smaller UPS I retired ages ago) will soon be headed back for responsible recycling, without my having to pay shipping.

So when you’re evaluating your backup system, don’t forget to take power into consideration. A backup hard disk can’t help you if it gets zapped by a blown circuit breaker or a lightning storm.