A few years ago, Saturday Night Live’s Weekend Update featured an appearance by “Steve Jobs” wherein he presented progressively smaller iPods, ending with the iPod invisa, an iPod so small that it was invisible yet was capable of storing, among other things, “every photo ever taken.”

Apple’s announcement of the 3rd generation iPod shuffle contains echoes of that ridiculous skit, with the updated iPod shuffle measuring half the size of the previous iPod shuffle design. Apple says the new shuffle is now smaller than a AA battery. The drop in size is coupled with a fourfold increase in storage capacity, to 4 GB, or, as Apple touts, up to 1,000 songs (depending on song length and encoding rate of course). 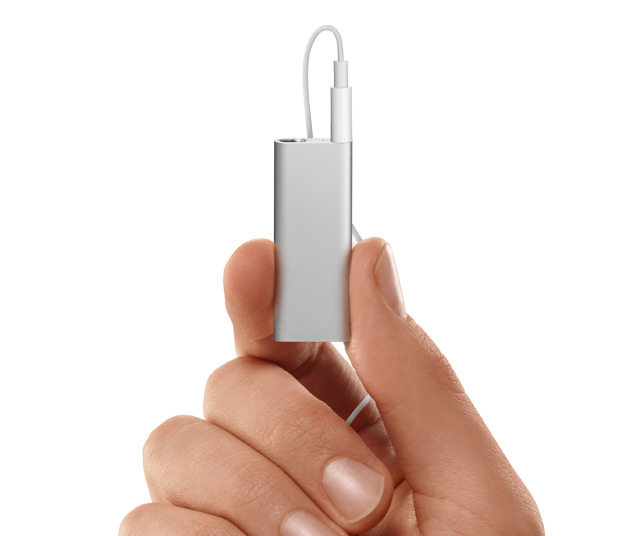 Lost Buttons — The reduced form factor has led to the relocation of the player controls from the casing to the earbud cord. The cord – similar to the one that ships with the iPod touch – has three buttons enabling users to play/pause, increase/reduce volume, skip to the next/previous track, fast-forward/reverse, get song information, and change the playlist. The only button now located on the case is the power/play-mode slider. 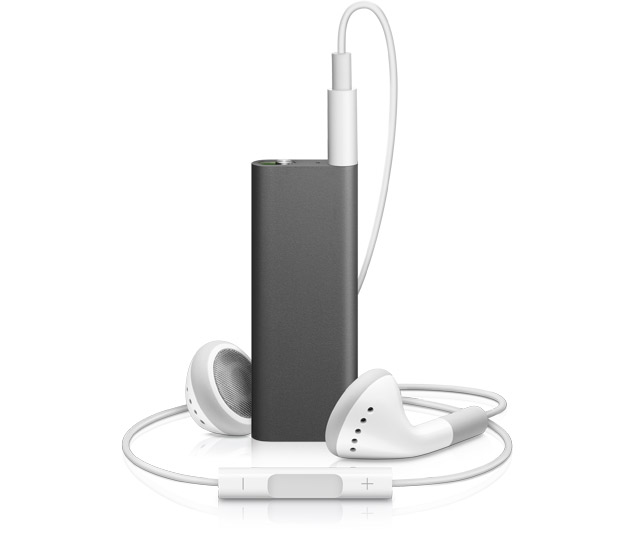 The click-patterns for skipping to tracks, or fast-forwarding and reversing aren’t intuitive, and while they’re listed in the documentation, many people probably won’t bother to read through that. Here are the important ones: Double-click for next track, triple-click for previous track, double-click-and-hold for fast-forward, and finally, triple-click and hold for rewind.

Users who prefer third-party headphones are already bemoaning the change for the limits they anticipate it will place on their headphone options. However, Greg Joswiak, Apple’s vice president of iPod and iPhone product marketing, has said Apple has been working with accessory makers to ensure there are various compatible headphone options, especially sports-oriented ones. More importantly, he told the Telegraph, “There will also be adapter cables available, so you can use your existing headphones with the new shuffle too.”

Additionally, if you use your own headphones, the iPod shuffle will start playing when you plug them in, and stop playing when you unplug them. As might be expected, you won’t be able to adjust the volume, skip tracks, or pause playback.

Speak to Me — Another major addition to the iPod shuffle is VoiceOver, a feature that enables your iPod to audibly announce the name of the song, artist, or playlist you’ve selected. Like the earbud buttons, VoiceOver helps Apple justify reducing the player size beyond even the previous minuscule size.

While this functionality is impressive, it should be noted that the iPod isn’t actually performing the text-to-speech operation. Instead, iTunes is synthesizing the speech, while the iPod is just mixing the song and announcement audio. (This is how the fourth-generation iPod nano provides spoken-word menus for those with vision difficulties.)

The Guided Tour video, available from Apple’s iPod shuffle page, gives a nice sense of how VoiceOver actually works. Holding down on the center button of the earbud controls prompts VoiceOver to say the song and artist information, without interrupting playback. Continuing to hold down on that button tells VoiceOver to list your playlists, enabling you to choose a new playlist by clicking the center button when the one you want is named.

Apple claims VoiceOver will automatically recognize which language you speak (presumably deducing this from your iTunes information), though should you want to change the language you can do so via iTunes. Currently the feature supports 14 languages including English, Czech, Dutch, French, German, Greek, Italian, Japanese, Mandarin Chinese, Polish, Portuguese, Spanish, Swedish, and Turkish.

Perhaps it will be a long time before any iPod has enough processing power for this, but we’d like to see the voice-based interface taken one step further, granting the user control through speaking into a microphone mounted on the earbud wires, much like the iPhone’s earbuds. It would need to recognize only a very small set of commands – play, pause, next, previous, etc. – and would be a welcome option for people listening to iPods while exercising or performing tasks that occupy their hands. But anyone caught talking to an iPod in a crowded airport could be glared at for extreme boorishness.

Although choosy users may be temporarily upset about the inability to use their favorite headphones, many people will undoubtedly love the new iPod shuffle’s reduced size, earbud-based player controls, expanded storage space, support for playlists, and VoiceOver support. Overall, this is a welcome and forward-looking update to the least expensive iPod model.

The iPod shuffle comes in either black or silver anodized aluminum and has a built-in stainless steel clip. Apple claims a 10 hour battery life. It requires iTunes 8.1, which was released the day of the announcement.