In stating that the 3rd generation iPod shuffle would require iTunes 8.1 many hours before the software actually appeared, Apple uncharacteristically let the cat out of the bag about a more-than-minor update. The latest version of iTunes, while obviously including support for the new iPod shuffle, also includes notable updates to Party Shuffle (now called iTunes DJ) and more.

iTunes DJ — iTunes 8.1 renames the longstanding Party Shuffle feature to iTunes DJ, and makes the feature more social by allowing anyone on your Wi-Fi network with an iPhone or iPod touch and Apple’s Remote app to request songs or vote on other requested songs. iPhone and iPod touch users must update to Remote 1.2 to be able to access a shared iTunes DJ, but at that point, they can see the entire iTunes DJ source list on the host Mac and vote for favorite songs. A single vote is enough to move a song to the top of the playlist, but if multiple people are voting, songs with more votes float to the top. You can’t vote against a song. 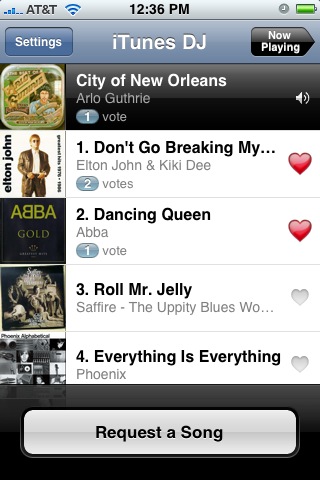 Within iTunes, the iTunes DJ feature gains its own set of preferences that enable you to send a welcome message, turn voting on or off, or require that users enter a password to gain access. 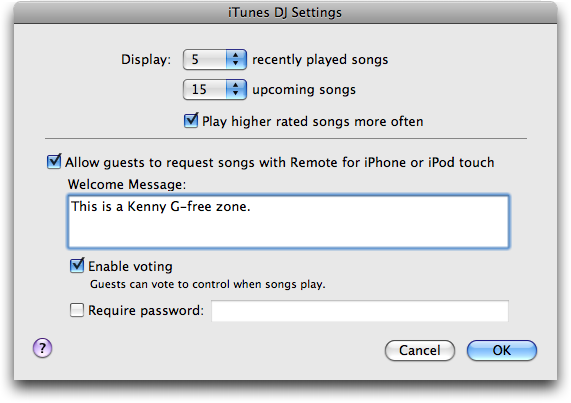 As much as iTunes DJ is a wildly cool feature that will undoubtedly be popular in clubs and at big parties, assuming whoever is in charge of the music is willing to let guests participate, it’s unlikely to be particularly useful outside of large gatherings. That said, some people have suggested that iTunes DJ and the Remote app turn iTunes into a personal jukebox as well; I guess I don’t have time to interact with my music that specifically.

Other Improvements — Apple claims iTunes 8.1 is faster when handling tasks such as loading large libraries, navigating the iTunes Store, and syncing devices. Apple hasn’t said how much speedier these tasks will be, just that they are noticeably improved. We haven’t noticed significant improvements, and accessing different parts of the iTunes Store still feels a lot slower than loading Web pages in Safari.

iTunes now automatically converts music from CDs as “iTunes Plus” files – meaning AAC format at 256 Kbps – which are higher quality than the previously standard files encoded at 128 Kbps.

Parental controls have been extended to control iTunes U and the iTunes Store separately, so teenagers of older iTunes users can sit in on lectures in iTunes U without being allowed to sneak off to the iTunes Store to listen to whatever racket those kids consider music these days.

Perhaps most significantly, the Autofill feature, previously available only for the iPod shuffle, is now available for all iPods. You can control whether or not Autofill replaces all items on each sync, if it chooses items randomly, and if it prefers higher rated songs. A slider enables you to reserve space for disk use – otherwise Autofill automatically selects the amount of music that will fit on the destination iPod so you don’t have to play a guessing game. From what we can tell in initial use, Autofill appears to honor podcast settings, which is good, and overall Autofill looks as though it will be extremely welcome for those of us who have more music than fits on our iPods. However, enabling Autofill isn’t obvious; see “In Search of iTunes 8.1’s Autofill,” 2009-03-13. 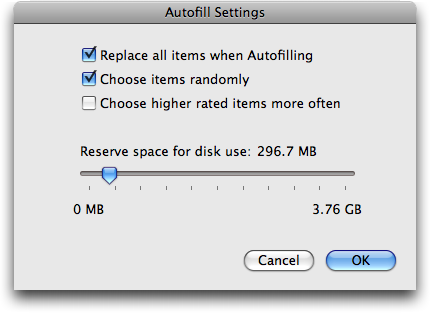 Oddly, the Genius sidebar, introduced in iTunes 8.0 as a way for iTunes to recommend new songs, was supposed to have been extended to include television and movie recommendations – it was mentioned in the release notes and Apple had even updated the iTunes Web pages to discuss it. Alas, the feature was apparently pulled at the last minute, since Genius in iTunes 8.1 still says, “Genius sidebar only works with music. Select a song in your library to see related music.” Perhaps we’ll be seeing iTunes 8.1.1 soon.

iTunes 8.1 requires Mac OS X 10.4.10 or later, and works all the way back to Macs with PowerPC G3 processors. It’s a 63.4 MB download and is available via Software Update or from Apple’s Web site.

Entertainment Tech News
Cookies & Privacy: We wish we were talking about chocolate-chip cookies here, but our Web site—like nearly all others—relies on a few minor digital cookies. Various laws around the world require us to tell you that fact, so consider yourself informed, if not nourished. By continuing to use this site, you agree to our use of these cookies. Cookie and Privacy Notice