Apple released updates to iLife ’09 and iWork ’09 this week, as usual providing no useful information about what’s changed other than, in the case of iMovie 8.0.1 for example, “improves overall application stability as well as addressing minor issues related to usability.”

But the changes are seldom that uninteresting, and I wish Apple would get off its terse horse and provide at least a little more information. I’m biased here, I fully acknowledge, because the following changes mean more immediate, unexpected work. I’m currently updating my book iMovie ’09 & iDVD Visual QuickStart Guide, and I also updated the iMovie section of Jim Heid’s upcoming title The Macintosh iLife ’09.

The undocumented changes below require that I go back and edit material and take new screenshots. That’s fine, it’s my job. But what irks me is that I need to spend a lot of time poking through the program looking for changes and searching online for information from people who are doing the same.

I understand that Apple isn’t creating its products for writers, and it can (and does) change features whenever it wants. The updates here are great for iMovie users. But since the development teams must keep internal lists of what’s changed anyway, is it really so hard to spend an hour and turn those into useful release notes?

With that off my chest, here are five things I’ve discovered that are different in iMovie ’09 8.0.1.

Split Clip Keyboard Shortcut — This is a minor but welcome change. You can now split a clip by pressing Command-Shift-S instead of accessing the command from the Edit menu. What makes it more helpful is that you can split a clip without making a selection: just position the playhead over the frame you want to slice, and press the keys. Previously, you could do that only by accessing Split Clip from the contextual menu.

Interlacing Bug Fixed — Here’s something I think Apple would want to trumpet loudly. It fixed a bug where 1080i (interlaced) footage would appear combed when exported to QuickTime or iDVD. Prior to the fix, getting a clean HD picture required that you process the footage in other applications after exporting. Now, the bug is fixed.

But there’s an interesting side note to exporting interlaced footage. If you export at 1920 x 1080 to AIC (Apple Intermediate Codec) or Apple ProRes format, and you haven’t performed any operations which scale, crop, or otherwise change the size or speed of any of your clips, then interlaced 1920 x 1080 footage is passed through unchanged.

Enter Coordinates for New Map Locations — The world is a big place, and it’s likely you may want to make an interactive map with a city or other location that’s not included in iMovie’s built-in database. In my article “10 Secrets of iMovie ’09” (2009-02-06), I described a way to add a custom map destination by editing the WorldLocations.txt file in iMovie’s application package.

Now, you don’t need to go to so much trouble. If you know the latitude and longitude coordinates, you can plug them into the Choose Location dialog when creating a map and iMovie sets the destination. (iTouchmap.com and Get Lat Lon are good sources for that information.) 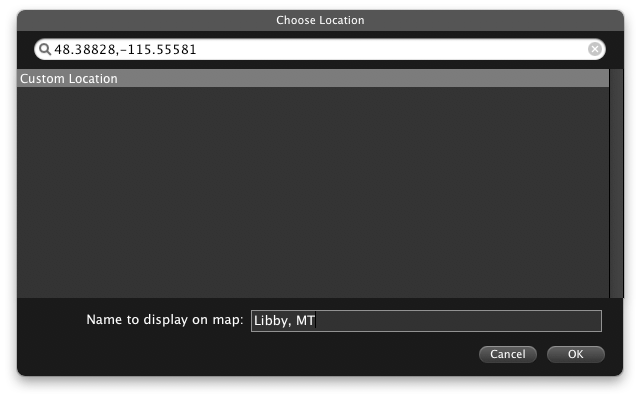 Be sure that when you paste the coordinates into the field, you’re adding just the numbers. I ended up in the Pacific Ocean once because I had copied a carriage return or some other invisible character.

HD Export Options — With YouTube and other sites now accepting HD video, it was only a matter of time before iMovie gained the capability to output it. When sharing to YouTube or choosing Share > Export, a new HD option is available that creates a 720p (1280 by 720) movie with a bitrate of 10 Mbps. The option doesn’t appear at all in the iTunes or MobileMe Gallery options.

Transitions in Split Clips — If you split a clip and then put a transition at the split, the two halves of the clip now overlap each other (maintaining overall duration). This allows you to, for example, add a video effect to one portion of a clip and use a cross dissolve to fade the effect in or out.

That’s it so far. Have you noticed anything different about iMovie ’09 8.0.1 that I haven’t covered here? Email me at [email protected].