Just in time for Earth Day on 22-Apr-09, Epson today announced a new “green” printer that’s cleverly decked out in a green casing: the GR-401. The monochrome laser printer (black-and-white, not green-and-white, thankfully!) is designed to meet the needs of homes and small offices while reducing its environmental footprint in numerous ways. It’s Energy Star-certified for the lowest power use in its class, and features a sleep mode that draws less than 0.5 watts of power while idle. The printer also employs a kind of regenerative braking – it recaptures some energy from the rollers’ inertia after power is used to initiate the gripping and feeding process. You can also attach an optional crank to spin up its internal motor, and reduce
power further. 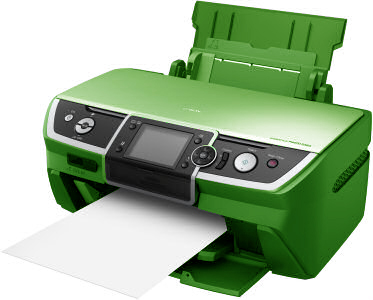 The printer also includes built-in Wi-Fi, so it can support multiple computers, thus eliminating the need for each computer to have its own printer, and it uses toner cartridges that were explicitly designed to be refilled up to 10 times. It can also print in duplex, using both sides of the paper automatically to reduce unnecessary paper use. The printer driver also automatically switches fonts to their Ecofont equivalent, reducing toner use by as much as 20 percent per character.

Most important, though, is Epson’s innovative recycle mode that reuses both toner and paper. Epson spokesman Isaac “Prince” Daley told us in a briefing that Epson’s research showed that nearly 80 percent of all printouts are recycled within 7 days of being printed. In response, Epson has developed a technology that strips the printer’s specially formulated toner particles from previously printed pages, leaving the paper clean and ready to be printed on again. All you do is stack previously printed pages in a top-mounted sheet feeder, and set whether the printer should print with virgin paper and toner or use recycled paper and toner, if available. Epson’s Daley said that although the recycled printouts are pretty good, they’re not quite as crisp as those using new paper and toner, hence the user option to switch.

Cool as it is, the recycling process isn’t perfect. Paper that has been written on can’t be put back through the printer, since pen ink and pencil graphite could contaminate the recycled toner. The printer automatically detects foreign substances and discards suspect toner and pages into a hopper. (A warning light lets you know the hopper is full.) And although small bends or crimps from paperclips aren’t problematic, paper that has been too crumpled could cause jams in the printer’s sheet feeder. Lastly, reformulating the recycled toner particles so they can be re-fused onto paper requires some energy, though Epson is justifiably proud of the fact that no additional chemicals are involved in the process, only water. Unfortunately, you can’t use tap water, due to unpredictable mineral concentrations.

Epson estimates that toner and paper usage will be reduced by 50 to 75 percent, since the only losses to the system are from pages that are either sent out or treated in such a way that they can’t be fed through the printer again. Unsurprisingly, this reduction in consumables means that the “razor blade” business model used for so long by printer manufacturers won’t work, so the printer is priced at $3,999. Epson will sell the special mineral-free water, produced using a patented thermal vaporization system, for $19.99 per liter bottle, enough for 200 pages. Toner refills will cost $39.99 for enough toner to print 3,000 pages, and replacement toner cartridges (pre-filled with toner) will cost $299. Both bottles and toner cartridges can be returned to Epson for recycling.

Although the GR-401 is the first printer to use Epson’s new recycling technology, the company has high hopes for it and is looking at introducing a large-scale variant that could be used to print and recycle newsprint, which could be a boon to the ailing newspaper industry, beset as it is by spiraling print costs.

April Fools Just for Fun Productivity Tech News
Cookies & Privacy: We wish we were talking about chocolate-chip cookies here, but our Web site—like nearly all others—relies on a few minor digital cookies. Various laws around the world require us to tell you that fact, so consider yourself informed, if not nourished. By continuing to use this site, you agree to our use of these cookies. Cookie and Privacy Notice