We all have people we want to avoid. Sometimes for a few minutes or hours (“Damn, the boss is coming, and I’m not done with the report!”) and sometimes for the rest of your life (“Not that psycho ex-boyfriend – please don’t let him see me!”). Invisibility for the iPhone aims to solve that problem with, you guessed it, technology!

The name is related to the Invisible option added to iChat in Leopard, where you can see buddies but they can’t see you. Invisibility’s developers typically write network-intrusion software, and have released this product separately under the company name Invisible Inc.

The Invisibility app relies on the information that iPhones and other devices emit whether they’re idle or in use, coupled with the enormous amount of personal data that we all spew into the Internet via social networking services. It can’t actually make you invisible, of course, but it can help you avoid uncomfortable situations by alerting you to the presence of unwanted people.

The app costs $79, which is extremely high for an iPhone app, but through 01-Apr-10, purchases of Invisibility include a lifetime subscription to the required Invisibility service, which is slated to cost $24.99 per year.

Invisibility works by creating a profile of each person you want to avoid, using a variety of inputs. You can give the program access to email that’s received on your iPhone, and it can scan for inbound messages. Using IP lookups and likely travel time estimates, the software tries to determine where that person was when he sent the email and where he is now, relative to your current location. The tracking screen uses Google Maps to show you the current location (if known) of anyone you’ve profiled, along with a circle of probability and a timestamp. This is useful when you’re taking a stroll and want to make sure the coast is clear. 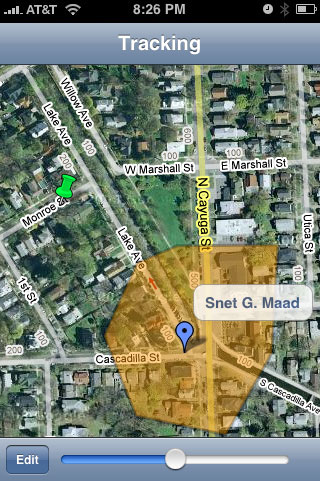 Invisibility can also use Bluetooth and Wi-Fi signals to identify someone’s cell phone within a range of 30 to 100 feet. To do this, you put the app into a sniffing mode, in which it grabs MAC addresses and other wireless identifiers out of the air when you’re near the person in question. If Invisibility “hears” those identifiers in the future, it uses that information along with other data to trigger a proximity alarm. These alarms can be customized for each person, so, for instance, you might want to be alerted via email and a loud warning sound when your ex-spouse appears anywhere in your neighborhood, whereas your boss moving within 100 feet of you might necessitate only a discreet vibration.

The program can also tap into Facebook messages, Flickr geotagging information, Skyhook Wireless location updates, Twitter, Dopplr travel logging, Blogger posts, and all kinds of other public and private (once you’ve connected it to your accounts) social media and buddy services. By adding someone’s Flickr account to their profile, for instance, Invisibility can use RSS to determine when a new photo is added, then extract the geotag information to see where that person was when the photo was taken, and calculate a possible current location for them. Since Invisibility reports your own location back to the company’s servers as well, it can use that for highly accurate location reporting for anyone who’s trying to avoid you.

While Invisibility is impressive, Invisible Inc. isn’t promising 100-percent success. However, since the system works largely by correlating vast quantities of data, the developers promise that it will improve in the future, as a surveying mechanism built into the app will enable users to report on failures. And, of course, the more people who use Invisibility, the more accurate it becomes, if only among Invisibility users.

The company calls this asocial networking, something the founders believe is a growing trend as people tire of being expected to be in a state of constant availability to an increasingly wide range of friends and acquaintances. Eventually, Invisible Inc. hopes to tie Invisibility into a new system with the working title of “Effacebook.”

April Fools iPhone, iPad, & iOS Just for Fun
Cookies & Privacy: We wish we were talking about chocolate-chip cookies here, but our Web site—like nearly all others—relies on a few minor digital cookies. Various laws around the world require us to tell you that fact, so consider yourself informed, if not nourished. By continuing to use this site, you agree to our use of these cookies. Cookie and Privacy Notice