Many of us rely on the Internet for work, and are at the same time incredibly distracted by it. Sometimes it’s not enough to promise yourself you’ll stay away from your favorite blogs or social networking sites – sometimes you need an intervention.

As a fairly distractible person, I’m big on applications that help focus my attention (see “Minimize Desktop Distractions”, 2008-12-04). You may recall me writing in that article:

I also considered taking measures to block my Internet roaming - a principal offender in my time wasting - but decided I'd probably ignore anything that told me how much time I was wasting or turn off whatever was keeping me from where I wanted to go.

I still agree with this statement. The trouble with many Internet blocking programs and methods is twofold. First, there’s the typical all-or-nothing ideology: I constantly need to check Web sites, gather information, and fact-check my work. So implementing a blanket no-Internet solution, such as disabling my AirPort connection, inevitably results in my needing to abandon it and get back online, and thus back in the realm of distraction. This brings us to the second issue: given the capability to disable whatever is keeping me off the Internet, I will almost inevitably do so. What I need is a flexible program that enables me to select the sites I can block, and then prevents me from turning it off.

Thankfully, this is exactly what SelfControl, a new customizable domain-blocking application designed by artist Steve Lambert and developed by Charlie Stigler, does. Recently, I had begun following Lambert on Twitter, interested mainly in his tweets in regards to contemporary art. (Lambert is also responsible for the popular Add-Art Firefox plug-in which replaces Internet ads with art.) Thus, it was a delight to discover that he also develops extremely useful real-world apps like SelfControl.

The open-source SelfControl is a streamlined application with a simple but effective interface and set of controls. Launching the application brings up an interface displaying a slider that sets the amount of time your blacklisted domain names will be blocked (you can block access for anywhere between 1 minute and 12 hours), a button that enables you to edit and view your blacklist, and a button that begins the blocking. Blacklisting domain names blocks access to them through your Web browser (both Firefox and Safari are supported), as well as through applications that communicate with the sites directly. For example, blacklisting twitter.com prevents Twitterrific from receiving updates or allowing me to post through it. 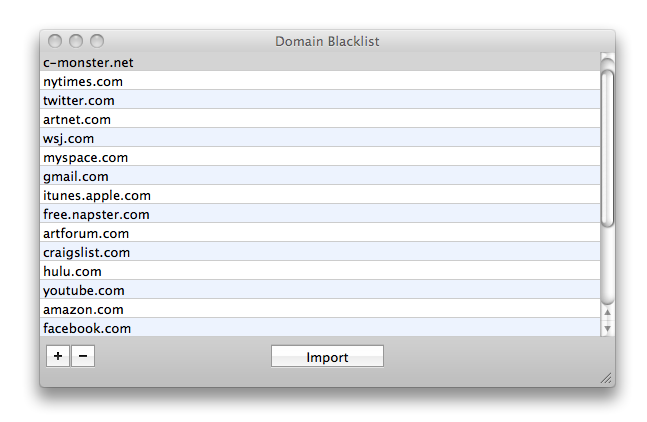 Clicking SelfControl’s Start button brings up an authorization prompt – requiring the user account password (a much-appreciated feature that shows forethought on the part of the developers – picture your friend repaying that April Fools prank with a 12-hour embargo on Internet access). A timer displays the remaining time you have left before access is restored.

Once begun there is no easy way to disable SelfControl. Even quitting the application, switching user accounts, or rebooting the Mac will not disable the domain blocking, since SelfControl works its magic by using Mac OS X’s built-in firewall to block traffic to the desired sites at the system level. It might be possible to disable SelfControl’s domain-blocking by tweaking firewall rules manually, but it’s probably easier simply to let the timer expire than to delve into the guts of ipfw configuration files.

SelfControl does have some kinks. Sometimes you need to relaunch your Web browser after initiating SelfControl to activate the domain blocking. Also, some sites seem more resistant to being blocked than others, and it may take a few minutes before access to them is denied, due to caching. Finally, on a couple occasions my blocked access has continued for a minute or two past the timer’s duration. Hopefully, we’ll see these issues ironed out in future versions.

All in all, SelfControl is an excellent little tool for blocking out Internet distractions without sacrificing access to sites on which you rely. I highly recommend that anyone wrestling with Internet time bandits try it out. SelfControl 1.1 requires Mac OS X 10.4 or later, and is a 1.7 MB download.