At a functional level, visiting an art museum is not so different from going to a Blockbuster video store (considering the rise of Netflix and Internet video, the two probably have similar attendance levels these days). For the most part, the objects in both are collected and categorized. In a movie store you have aisles for Action, Horror, Comedy, and so on. Art museums use similar schemes – wings for Flemish Paintings from the 1600s, Etruscan Sculpture, and Japanese Works on Paper. Even in sections that appear jumbled, there’s usually some rhyme or reason – New Releases or Staff Recommendations in the movie store, and Recent Acquisitions or Works from the Rubell Collection in the art
museum. The goal of the organizational clarity is similar in both cases – it makes it easy to find what you’re looking for, and once you’ve found whatever that is, to find more of the same.

Most art museums have taken a traditional approach to the development of their online presence, transplanting their real-world organization to the Web. Take, for example, the Metropolitan Museum of Art in New York, whose Web site, while offering a searchable database, focuses on giving each curatorial department its own page. The Web site for the Louvre in Paris has a feature that furthers the effort to preserve the real-world feeling of the museum by enabling users to navigate 3D virtual
spaces that replicate its rooms and exhibitions. While there’s nothing wrong with maintaining these sorts of groupings, the digitizing of a collection opens the door to many other possibilities. (For some now-historical musings on museums in the digital world, see Brad DeLong’s “Ontological Breakdown, or, Pretending to be a Help System,” 1995-08-21.)

Peering into the ArtScope — The San Francisco Museum of Modern Art’s ArtScope is a great example of an innovative approach to bringing a museum’s collection to the Web. ArtScope is a visual browsing tool comprised of a thumbnail grid displaying 3,500 works from the SFMOMA’s permanent collection. The grid is zoomable, displaying a lens which can be moved over it to magnify certain areas, enabling users to view hundreds of artworks simultaneously, or just one at a time in close detail. 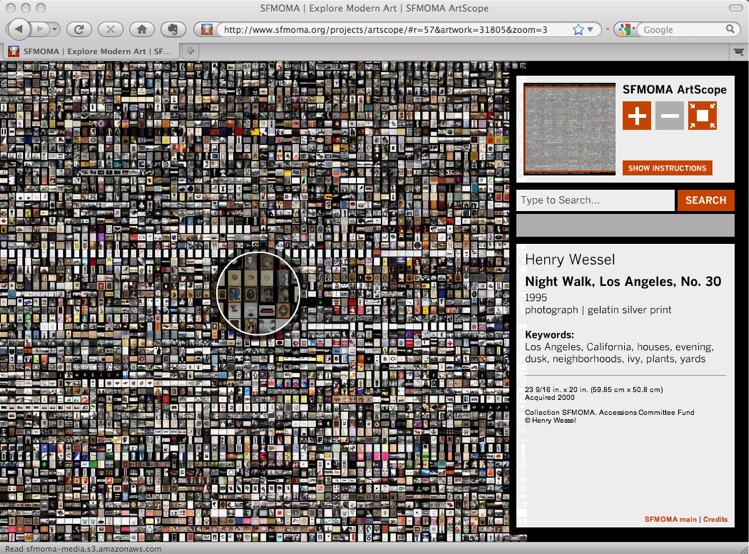 When you launch ArtScope, a set of controls and a search box are visible to the right hand side of the window. The controls help you zoom in and out, or zoom all the way out, though it’s easier to double-click inside the lens to zoom in, and to double-click outside the lens to zoom out. You can also grab the grid and drag to move it around, exactly as you can with a map in Google Maps. Unfortunately, ArtScope doesn’t support trackpad gestures or the scroll wheel for zooming, and the incremental zooming via double-clicking is tedious. 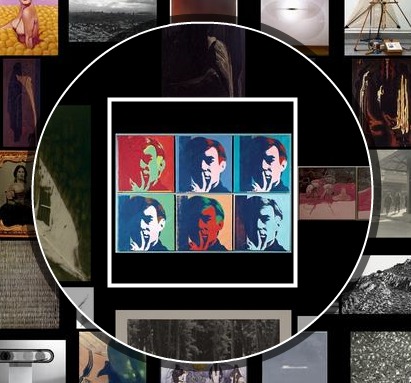 More interestingly, ArtScope also provides a search tool, and below it a pane displaying information about the artwork at the center of the lens (the artwork information is displayed even if you are fully zoomed out). You can type anything into the search field: artist name, title, date, medium, keywords, etc. If any results match your search phrase, ArtScope moves the lens (maintaining the same level of zoom) to the first match. If more than one result exists for your term, a navigation bar displays the number of the result you are currently viewing, the total number of results, and arrow buttons that enable you to jump to the other matches within the grid. It’s fun typing in a term like “1970” or “Acrylic on canvas”, and then flying
around the grid via the arrow keys to view all the results in their scattered locations.

Browsing the Hard Rock Memorabilia Collection — ArtScope finds a kindred spirit in the Hard Rock Cafe’s Memorabilia site, which has a similar visual interface, and, in some ways, a better one for browsing through the company’s collection of popular music artifacts. The controls and navigation are more along the lines of what I’d like to see brought to ArtScope. The Hard Rock Memorabilia tool has grab-and-drag navigation like SFMOMA’s, but with an Apple-like design touch. The drag has a little inertia to it, which gives the navigation a natural and physical feel. That sense of inertia also carries over to the zoom, which supports trackpad and scroll wheel
zooming – a much faster and more efficient way to zoom in and out. Zooming in ArtScope magnifies the circumscribed area of the lens, but also magnifies the background to a slightly lesser degree. Visually it’s a bit cluttered, and upon using the unified-page-zoom on the Hard Rock site, the lens feels unnecessary. 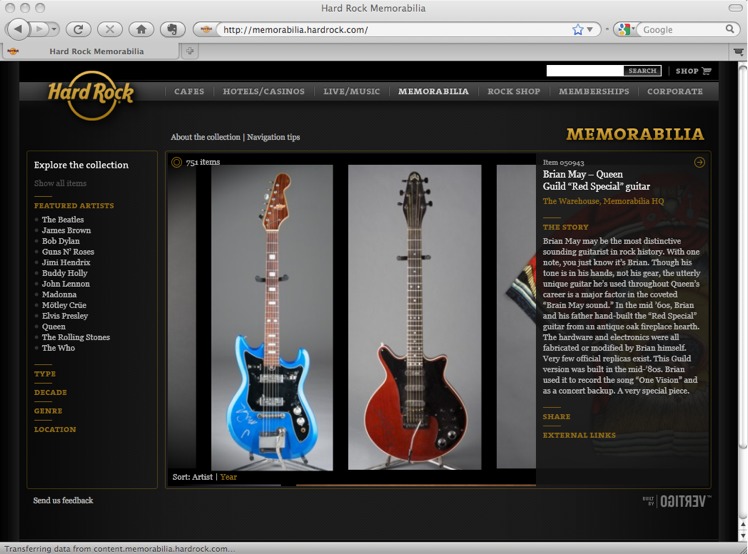 However, ArtScope is resizable and can take advantage of larger screens, while the Hard Rock Memorabilia tool maintains a fixed window size on all monitors. This becomes an issue with the latter’s information pane, which, while slick in how it pops up at a certain degree of magnification, takes up prime real estate in the limited window area, occasionally blocking the object you’re trying to view. Another strike against Hard Rock’s more attractive information pane is that there are instances when you’d want to be able to view the item’s information while zoomed out, as you can with ArtScope. Yet the largest problem with the Hard Rock Memorabilia tool is its slow load times. Zooming in almost always results in a blurry pixelated image
that takes far too long to resolve into crisp detail. While you can zoom in quite close, the delay ensures you won’t bother. In comparison, ArtScope zooms crisply and quickly.

Lastly, unlike ArtScope, the Hard Rock Memorabilia tool lacks any search tool and instead provides categories for breaking the collection into chunks. ArtScope’s approach here is far more effective and engaging, since it eliminates the traditional top-down establishment of categories, instead enabling users to create their own collections via the search tool.

Rethinking the Online Museum — Despite my gripes about ArtScope’s zooming, I still think it’s a brilliant step toward answering the question of how museums can offer an online experience that goes beyond what’s possible in the physical world. Nothing can replace the experience of seeing art in person, but since many people will never have the opportunity to stand face to face with even the most significant works of art, it’s essential that we explore different ways of viewing these things on a computer screen. ArtScope encourages wandering, free associations, odd connections, and a playful engagement with a group of objects often perceived to be weighty and untouchable. The virtual Prado Museum in Google
Earth offers another approach, though one that lends itself more to deep exploration of a very few works rather than any sort of synthesis of an entire museum’s collection (see “Google Earth’s Virtual Prado Museum,” 2009-01-28).

In sum, ArtScope produces an experience you simply cannot achieve in a physical setting, and proposes a new model for looking at art. It seizes upon the scalability of digital reproduction to enable new juxtapositions – a large sarcophagus and a tiny drawing can be viewed as identically sized images side by side, and we can sift through a collection almost as though we’re thumbing through a deck of cards. I applaud the SFMOMA for approaching their Web site with a sense of inventiveness, and hope to see more museums consider their relationship to the Internet with an appreciation for what the digital dimension can offer, and for what possibilities remain unexplored.

Opinion
Cookies & Privacy: We wish we were talking about chocolate-chip cookies here, but our Web site—like nearly all others—relies on a few minor digital cookies. Various laws around the world require us to tell you that fact, so consider yourself informed, if not nourished. By continuing to use this site, you agree to our use of these cookies. Cookie and Privacy Notice