Sometimes, I think I’m always an edge case: one of those people whose technological needs or behavior is a tangent to the circle representing most people.

Take Migration Assistant, Apple’s tool for moving account information, applications, and other data from one computer to another when you’re upgrading or changing hardware. I have never gotten this to work correctly. Even when files copy, the new account seems to have irreparable permissions problems, or is named incorrectly, or just doesn’t work. I have sometimes wiped new machines, installed the operating system from scratch, and migrated again to no avail.

That’s why I’m so overjoyed that, in moving from a PowerPC Mac mini that’s a few years old to a modern Intel Mac mini from the latest model update, Migration Assistant worked perfectly and rapidly.

Apple often tells me and other reporters during briefings about the latest improvements to Migration Assistant, usually resulting from limitations reported by users or situations the company introduced in changing hardware options, like the MacBook Air lacking Ethernet without an adapter or new laptops without FireWire.

In Migration Assistant’s earliest incarnations, it was more or less a way to move files over a FireWire connection between two computers. FireWire can act as a networking medium, and Apple has long had nifty support for this.

In the current version, Migration Assistant can work over FireWire or an Ethernet or Wi-Fi network, from a Time Machine backup on a local drive or via a networked Time Capsule, or from a connected hard drive that has a bootable startup disk.

For my migration, I wanted to use Ethernet (100 Mbps on the old Mac mini and Gigabit on the new one) to handle the transfer. While FireWire would have been faster, because of the trouble I’ve had with FireWire in the past, I wanted to avoid a variable that I thought might be a problem.

In performing the setup of the new computer with its fresh copy of Mac OS X 10.5 Leopard installed by Apple, I selected the migration option. When prompted, I selected first to transfer information from another Mac and then clicked the Use Network option on the screen that told me to plug in FireWire cables.

Migration Assistant requested that I launch a copy of it on the originating machine, choose To Another Mac as the option, and then enter a five-digit code to confirm the action. (This last step is to ensure that if two computers are trying to migrate at the same time, say on a large network, they don’t confuse the requesting system.) 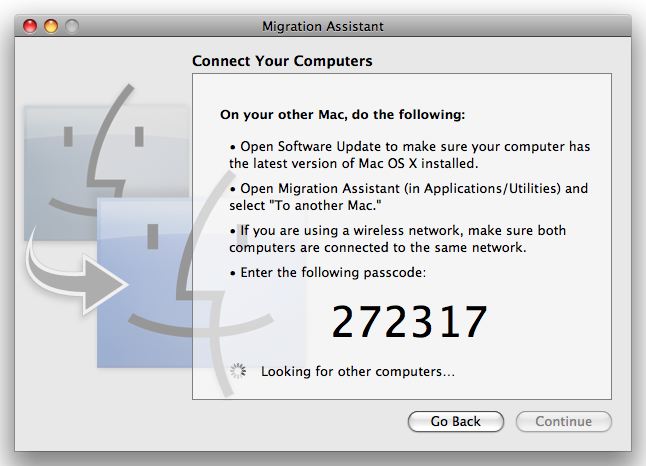 The program on both computers then dispayed the same information throughout. First, a set of possible items to transfer (such as the current user account, applications, and so forth) appeared with the total storage required for each. I marked everything, and the system said it would take about 2 hours to complete the move, which proved relatively accurate.

After turning off the old Mac mini and restarting the new one, I had to make a few minor changes, such as renaming the computer in the Sharing preference pane. Otherwise, the new machine worked identically to the old.

I forgot, as I always do, to de-authorize the old computer in iTunes, which I’ll do shortly before I wipe and reformat the old mini. I have a full backup separate from the migration in case I discover missing files or other problems, too.

This was a great relief. When I’ve chosen to create a new version of an old machine in the past, either by “hand” or via Migration Assistant which then failed, I’ve spent hours of tedious work copying files and checking applications, and weeks tuning. So far, two days later, the new mini is in perfect shape.

In fact, the migration worked so perfectly that an inexplicable system beep, which happened on the old computer with no explanation, prompt, or bouncing application icon in the Dock, now happens with my new computer. I guess that’s a measure of success.

Mac & macOS Productivity
Cookies & Privacy: We wish we were talking about chocolate-chip cookies here, but our Web site—like nearly all others—relies on a few minor digital cookies. Various laws around the world require us to tell you that fact, so consider yourself informed, if not nourished. By continuing to use this site, you agree to our use of these cookies. Cookie and Privacy Notice