For the most part, I’ve come to grips with the ways that Apple chose to make Mac OS X break with previous versions of the Mac OS. But while some habits died harder than others, a few refuse to give up the ghost. One of them clawed its way back into my consciousness recently, prompting me to query the Twitterverse for solutions.

My problem? Although I understand and usually appreciate the way Mac OS X interleaves windows from different applications, the one application where that behavior bugs me is the Finder. Specifically, I want to be able to click on any visible part of the Desktop and have all Finder windows appear.

Yes, I know that clicking on the Finder’s Dock icon has the same effect. But the Finder’s Dock icon is small and – for me – located in the upper right corner of my right-hand 24-inch monitor, making it a difficult target, particularly if the cursor happens to be in the bottom half of my left-hand 24-inch monitor, where my main Finder window lives. But there is often a good chunk of Desktop showing, and even when it’s almost all obscured by other windows, there’s usually a clear spot somewhere nearby where I can easily throw the cursor and click without worrying about accuracy.

There are other approaches, of course, but they rely on other interaction methods, whereas I want to click the Desktop. For instance, using the Command-Tab application switcher to switch to the Finder brings all Finder windows to the front.

There are also a number of utilities to bring the old Mac OS 9 windowing behavior to all applications, although I want it only for the Finder. Paul Russo recommended the free GoInFront for this, John Swift recommended the free X-Assist, and Mark Nagata of our estimable Japanese translation team suggested an option in James Thomson’s $29 DragThing (an excellent utility, though not one that quite fits the way I work). Several people also mentioned LiteSwitch X from Proteron, a utility that has been around for many years to provide Mac OS 9-like behavior to Mac
OS X. Alas, Proteron’s Web site doesn’t seem to be active any more, so LiteSwitch X may be moribund.

When I initially posed the question on Twitter, I received these and the following solutions, though only one did exactly what I want without requiring software that I wasn’t already running.

Keyboard Maestro — So a tip of the hat to Peter Lewis of Stairways Software, who noted that a simple macro in his $36 Keyboard Maestro utility (which I’m currently liking a lot for macro and multiple clipboard capabilities) could give me the Desktop-click behavior I wanted.

Peter’s macro triggers on the Finder being activated (which happens on the click on the Desktop) and all it does is execute an action that brings all application windows to the front. I want it to work only in the Finder, but if you had other applications whose windows you wanted to stick together on application switches, you could just add more triggers to the macro. 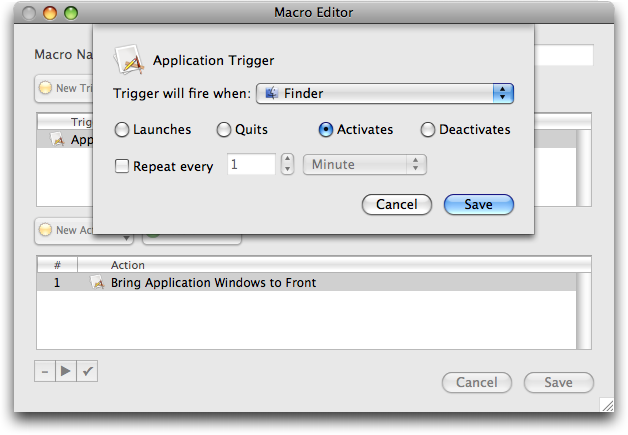 Since people were so generous in creating other ways to skin this particular cat, I’d be remiss in not sharing them.

Klicko — Rainier Brockerhoff replied to my tweet saying that it wouldn’t be hard for his free Klicko utility to do what I wanted. He had written Klicko explicitly to eliminate clickthrough, another of those changes from Mac OS 9 to Mac OS X, though one that bothers Matt Neuburg much more than it bothers me (see Matt’s paean to Klicko in “Fix Your Clicks With Klicko,” 2008-12-01). Lo and behold, the very next day, Rainier released Klicko 1.1, with an option to hold down a user-configurable set of modifier keys when clicking on the Desktop to bring Finder windows to the front. Klicko is a nice addition to
Rainier’s collection of utilities – the current version is 1.1.1.

FinderFront — Rainier wasn’t alone in aiming to solve the problem through code. David Sinclair of Dejal Systems (whose Simon monitoring software I use and like, and who has just dipped his toes into the iPhone world with SmileDial) also stepped up to the plate with a free app he calls FinderFront. It too does exactly what I had suggested would be useful in capturing the Desktop click and showing all the Finder windows. The only caveat is that because it captures all Desktop clicks, it disables itself after activation for 60 seconds so you can work with icons on the Desktop.