A few years ago, I finally gave in to peer pressure (namely, from Adam Engst and Geoff Duncan) and bought a secondary display to attach to my laptop. Although I was skeptical at first, having drastically more screen real estate does make a big difference in productivity. (See our series of articles about multiple monitors; or, take a different tack and see how Jeff Porten uses two laptops to accomplish the same thing in “Build Your Own 23-inch MacBook,” 2007-02-05.)

Now, when I’m working in my office, I use a 20-inch Dell display as my main monitor and my MacBook Pro’s 15-inch built-in screen as a secondary monitor. I typically put iChat, Tweetie, and Skype on the laptop’s screen, along with Screen Sharing, Activity Monitor, and other applications that I need to reference occasionally. The Dell display handles applications I use more actively, like Web browsers, word processors, and email.

Even so, I still end up with lots of window overlap. Wouldn’t it be great to add a third display to the mix and spread out more? I already own another 20-inch Dell (formerly attached to an old Power Mac), but my main computer is a laptop with just one video-out port, not a tower that accommodates multiple graphics cards.

However, a pesky port shortage was no reason to give up. Village Tronic clearly buys into the advantages of using multiple monitors. The company’s $499 ViDock Gfx is essentially an external PCI Express graphics card that connects to a MacBook Pro via an ExpressCard/34 card. (I looked at the ViDock Gfx for Macworld as part of an overview of ExpressCard/34 devices.) While that’s a fine solution for owners of the supported generations of the MacBook Pro who don’t mind a loud fan attached to their Macs, it doesn’t help if you’re the owner of a MacBook, MacBook Air,
iMac, or Mac mini.

Instead, I’ve been testing Village Tronic’s ViBook, a small $129 device with a DVI port on one end that plugs into the computer via USB. It supports up to 1680 by 1050 pixel resolution widescreen, or 1600 by 1200 resolution for a conventional display at the 4:3 aspect ratio. You can connect up to four external displays using one ViBook for each monitor (and a USB hub, depending on the number of open USB ports on your Mac); under Windows, you can connect up to six ViBooks and monitors. 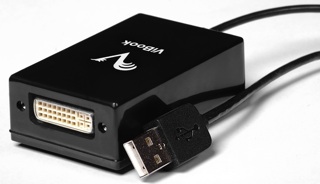 The ViBook includes a DVI-to-VGA cable if you want to connect a VGA display, a DVI adapter for connecting via DVI, and a mounting bracket for optionally attaching the ViBook to the back of a monitor.

After I installed an included video driver, the ViBook was ready to go. (The ViBook driver software requires Mac OS X 10.4.11 or Mac OS X 10.5.5 or higher running on an Intel-based Mac.)

Plugging the USB cable into my MacBook Pro made Mac OS X see the new monitor and let me begin using it; I didn’t need to restart the computer. The most work on my part was going into the Displays preference pane and configuring the arrangement of my three screens. In no time, I had nearly 2 million more pixels at my disposal.

Stutters and Limitations — Whether those pixels are actually helpful depends on how you plan to use them.

The Read Me file included with the driver software (version 1.1, the most recent available at the time of this writing) notes two significant issues:

As a result of these limitations, you need to remember which applications need to be quarantined away from the ViBook screen.

The Read Me file also includes a list of nearly two dozen known issues, many of which boil down to problems running the ViBook display as the Mac’s main display.

(An aside: I applaud Village Tronic for including this level of detail in its release notes, but I don’t like that the two main issues – 3D acceleration and color calibration – are listed only in the Read Me file distributed with the driver software. A disclosure, perhaps on the Tech Specs page of the ViBook Web site, should make it clear the software is limited in these respects. Otherwise you must either buy the product and install the software, or download the software before purchase and review the release notes there, which is unlikely to happen.)

Ignoring those issues for a moment, a ViBook-enabled display suffers from reduced drawing performance overall. When moving a Finder window, for example, the motion stutters as the ViBook redraws the screen, giving the impression that it’s operating at a reduced frame rate. Playing videos in QuickTime Player and iTunes similarly lagged, with the audio and video drifting out of sync after 30 seconds or so. (So that rules out using a ViBook display as a dedicated screen for watching movies or TV shows.) I also can’t imagine it would work at all for fast-action gaming.

The ViBook Upside — Despite the shortcomings, I think the ViBook has a lot to offer. I mentioned earlier that its usefulness depends on how you want to use a third (or fourth, or fifth…) display. If you just want to stretch out and view more data, the ViBook works quite well. For example, while doing some Web design work, it was great to preview site iterations (ignoring the colors) and experiment with style sheets in CSSEdit on the ViBook display while I used BBEdit for coding and Photoshop CS4 for images on my primary display.

I also used the extra screen to monitor remote computers using Screen Sharing, to push iTunes off my main display, and to keep several OmniOutliner documents open to refer to notes without having to sort through layers of document windows belonging to various applications.

I can imagine that people who need quick access to broad sets of information, such as real-time stock market data, would benefit from chaining several monitors to one machine. I was able to test just one extra monitor on my setup (having only one ViBook at my disposal), and it was like stepping out of a crowded room to an adjacent courtyard. After years of working with layers of hidden windows, spreading them out is refreshing.

Is using the ViBook the same as connecting a second or third monitor to a hardware graphics card in a Mac Pro? No, and early this year, Adam actually bought a Mac Pro expressly so he could run a pair of matched 24-inch monitors at 1900 by 1200 resolution (larger than the ViBook supports) and without worrying about Quartz-accelerated applications, slow redraws, or color weirdness. But depending on what you’re expecting out of it, the ViBook can provide more room to work in programs that don’t require the level of performance you’d get (and have to pay for) with a Mac Pro.

Multiple Monitors Productivity
Cookies & Privacy: We wish we were talking about chocolate-chip cookies here, but our Web site—like nearly all others—relies on a few minor digital cookies. Various laws around the world require us to tell you that fact, so consider yourself informed, if not nourished. By continuing to use this site, you agree to our use of these cookies. Cookie and Privacy Notice