Apple released iMovie ’09 8.0.3 this week, a seemingly minor update that “addresses general compatibility issues, improved overall stability and fixes a number of other minor issues.” However, I’ve discovered that this small iteration turns out to have two new features, along with some other undocumented changes. (Which is good news and, to me, funny because my book “iMovie ’09 & iDVD for Mac OS X: Visual QuickStart Guide” has just been released. These changes don’t make anything in the book outdated or wildly incorrect, thank goodness.)

Ken Burns for Video — Until now, the Ken Burns effect has been reserved for still photos. When you import a picture, iMovie automatically applies the pan-and-zoom effect; for example, the clip begins zoomed into one corner of the photo and gradually zooms out to reveal the entire image.

Now you can do the same for video clips. Select a video clip and click the Crop, Rotate, and Ken Burns button on the toolbar (or just press C). Click the Ken Burns button in the Viewer to set a start and end point, just as you would with a still photo. This is a pretty big change, especially for an x.0.3 release. 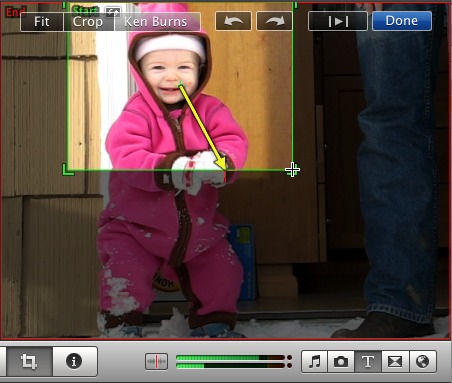 Keep in mind that as you zoom into standard-definition video, the resolution will decrease, although you probably won’t see much of a difference when starting with high-definition footage. But in my quick testing, the results were perfectly acceptable.

New Optimize Video Menu Option — When iMovie imports most high-definition footage from a camera, such as HDV or AVCHD, it converts the video to Apple Intermediate Codec (AIC) for easier editing. However, some formats remain intact – the Flip MinoHD, for example, records in MPEG-4 format encoded with H.264 compression.

For better performance during playback and editing, you can convert clips using the new Optimize Video menu item, located in the File menu. With a clip selected, choose Full – Original Size or Large – 960 x 540 to transcode the clip into AIC. You can also choose these options from the contextual menu (Control-click or right-click a clip to view the menu).

Manual Audio Fade Duration — You can set a specific time over which a clip’s audio fades in or out. In earlier versions of iMovie ’09, that time was limited to 2 seconds, but now it can be up to 5 seconds.

Other Optimizations — Some of Apple’s “other minor issues” should be welcome for iMovie editors. Performance of rendering and playing back themes and maps has gotten faster, as has general application launch time.

As the release notes indicate, deleting a beat marker no longer modifies the project duration, but the duration is also maintained when you turn automatic transitions on and off.