AOL has pushed out a version of AIM (AOL Instant Messenger) for iPhone that features push notification of new messages. The program comes in two versions: free with ads, or $2.99 without ads. Both versions work with iPhone OS 2.0 software, but require iPhone OS 3.0 to display alerts of new responses from chat partners when you’re using other apps.

The addition of push is the only major change to the iPhone AIM client, and it’s a big one. (The other, minor, addition is typing in the landscape orientation.) You have to launch AIM and sign in to activate push. All programs that feature push have to be launched at least once to register their intent to push, even if there’s no account configuration required.

Once you’re signed in to AIM, the software lets you remain signed in for 24 hours, during which time incoming messages are displayed as push notifications if your iPhone is sleeping or if you’re using other apps. If the iPhone’s display is active and you’re using AIM, messages are shown inline. 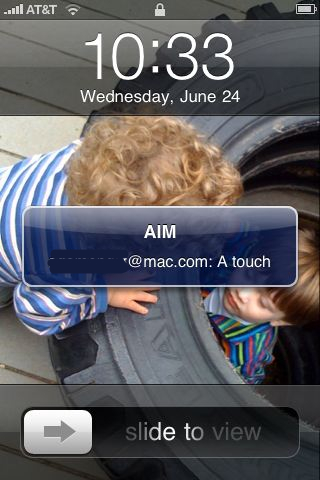 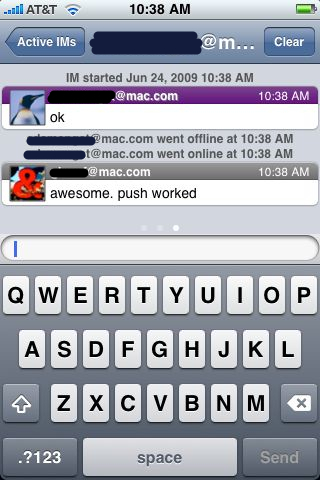 The iPod touch receives notifications only if it’s connected to a Wi-Fi network; while awake (display active), it shows messages instantly, and while sleeping, it checks
every 15 minutes. The iPhone uses Wi-Fi only if a cellular connection isn’t available, and Apple’s developer guidelines says those messages are shown only if the iPhone is plugged in or awake. This appears to be either an inconsistency in how the iPhone and iPod touch handle push, or an error in one of Apple’s documents.

AIM can work from multiple locations at once, which means you could be signed into iChat on one or more Macs and signed into AIM for iPhone. However, in testing, Adam Engst and I found that if you and your partner have encryption enabled in iChat, messages and sessions initiated in iChat don’t generate push notifications. If you start responding to the same person in AIM for iPhone, encryption is disabled on iChat, and push notifications start up.

You can disable iChat encryption (Preferences > Accounts > your account > Security), or make sure you’re logged out of iChat on all machines if you want push notifications to work in AIM for iPhone.

Push notification behavior for an iPhone or iPod touch can be set through a new Notifications item that appears in the Settings app only after you’ve installed at least one program that uses push. There’s a global setting to turn notification on or off, and then program-specific options. AIM offers the choice of disabling sound, alerts, and badges. (A badge is the number that appears on an app icon showing a quantity of something associated with the app.) 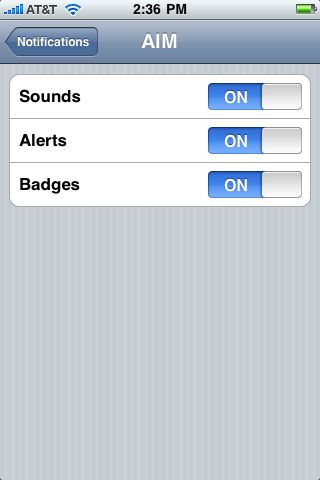 The addition of push should be part of the inevitable decline of text messaging (also known as SMS). As I wrote in “When iPhone Pushes, Text Message Fees Fall” (2009-04-09), a text message might cost a carrier a fraction of a cent to handle, while the firms charge customers up to 25 cents per message.

As far as the details that Apple has provided explain, push notification doesn’t cost the customer or the software developer anything, and, in the United States, iPhones come with unlimited data plans. Push notifications are tiny, and even thousands of notifications should add up to no more than a megabyte per month, which shouldn’t be a problem even in countries that cap data plan usage.

Unlike SMS, push notification is best effort – Apple tells developers that “delivery of push notifications is not guaranteed.” For instance, Apple’s “quality of service” description says that notifications that can’t be delivered are stored for a “limited period” before being deleted, and that only one notification per app is cached if a device isn’t immediately reachable.

SMS is designed to be more robust, and while there is also no guarantee, SMS text messages are almost always delivered unless a cell phone is either out of range or turned off for an extended period of time.

SMS’s key advantage is universality across carriers and countries, even though cross-border SMS is even more expensive than the ridiculous in-country charges. But AIM has tens of millions of users, and it’s free to get an AIM account that works with iChat as well, so you could encourage anyone with whom you frequently text message and who has an iPhone or iPod touch to set up an AIM account for use with the iPhone client.

That said, AIM can’t yet replace SMS. The 24-hour sign-in limit might be AOL’s way of reducing load or Apple’s requirement to avoid damaging relationships with carriers. Still, I could see checking in to see if someone were on AIM before using SMS – and if not, sending an SMS message for them to log into AIM.