Despite being packed with information, dictionaries receive scant attention these days. You look up a word to check its spelling or definition, maybe skim its etymology, and then return to what you were doing. But if you consult the Wordnik Web site, you could easily find yourself embarking on a languorous exploration of the English language.

Wordnik provides definitions from the American Heritage Dictionary of the English Language, Fourth Edition; the Century Dictionary; WordNet 3.0; and the GNU version of The Collaborative International Dictionary of English. Synonyms and antonyms are pulled from Roget’s II: The New Thesaurus, Third Edition, and Allen’s Synonyms and Antonyms. Definitions from Webster’s Unabridged 1913 edition also occasionally make appearances.

There’s much more to a word than its definition, of course, and Wordnik supplements the basic information in several additional ways. Most prominent are examples of the word in use, pulled from titles available from Project Gutenberg. Passages appear at the top-left corner of the page, providing the word in several contexts. I think this approach is a great idea, because a definition alone may not always give you a sense of how the word is used.

Wordnik also includes audio pronunciations read by a deep-toned man from American Heritage. If you create a free Wordnik account, you can record your own pronunciations (as well as take other actions such as adding notes and suggesting related words). I noticed that kerfuffle didn’t have a pronunciation, so I recorded one. (I also realized after consulting Wordnik that I’d always pronounced it “kerfluffle” with an extraneous L in the middle.)

A Statistics graph, when available, displays the frequency a word has been used each year dating back to 1800, with an indication of how unusual its usage was for that year. Wordnik appears to be doing the calculating itself, but it’s unclear where the source data is coming from. 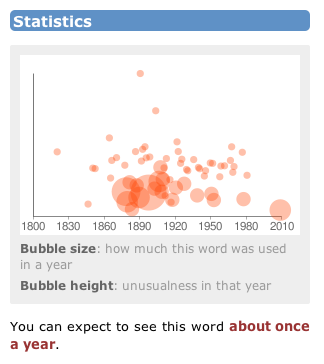 For a more modern take, Wordnik grabs real-time examples of the word from Twitter, as well as images from Flickr that contain the word as a tag. The site also tells you how many times a word has been looked up, which is a neat indication of which words people are using or exploring. And, no doubt because it’s possible, some words include anagrams and their point values in Scrabble. 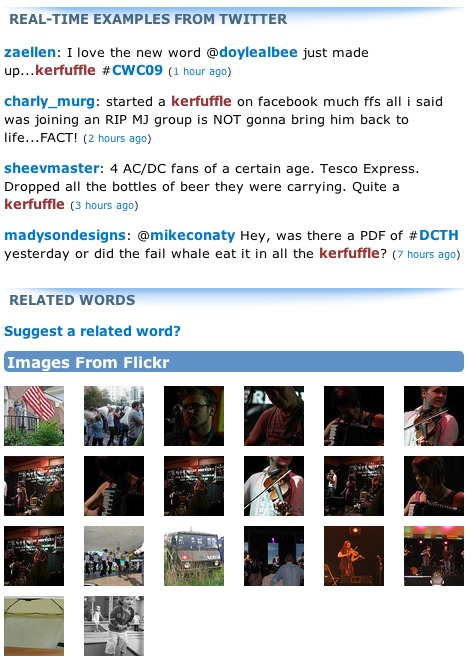 Although Wordnik claims a database of 1.7 million words, many words are bound to not appear (or are not recognized as real words). Instead of putting up a generic “word not found” error page, Wordnik uses its tools to locate instances of the word online. Even if you can’t suss out the precise definition, the additional context can be a ginormous help in determining its meaning. This approach can also apply to people: “jeff carlson” displays recent appearances of my name in Twitter plus two photos from Flickr.

Wordnik proves you don’t have to be a lexicographer or vocabulist to appreciate and play with language. But be careful, because you could find yourself happily absorbed in the site for hours.