Since having a child last year, my wife and I often find ourselves confirming that gravity does, in fact, continue to function well. Our toddler trips, sits down abruptly, and drops things from all heights as one would expect from someone still figuring out how her body is working.

You can see where this is going.

One day recently, my daughter reached for something shiny and swiped the corner of my wife’s iPhone 3G, spinning it off the table and onto one of its corners against the floor. The top portion of the glass screen fractured, but the phone was still usable. To keep glass shards out of my wife’s ear when using the phone, I immediately applied an Artwizz ScratchStopper, a plastic film designed to protect the iPhone’s screen. 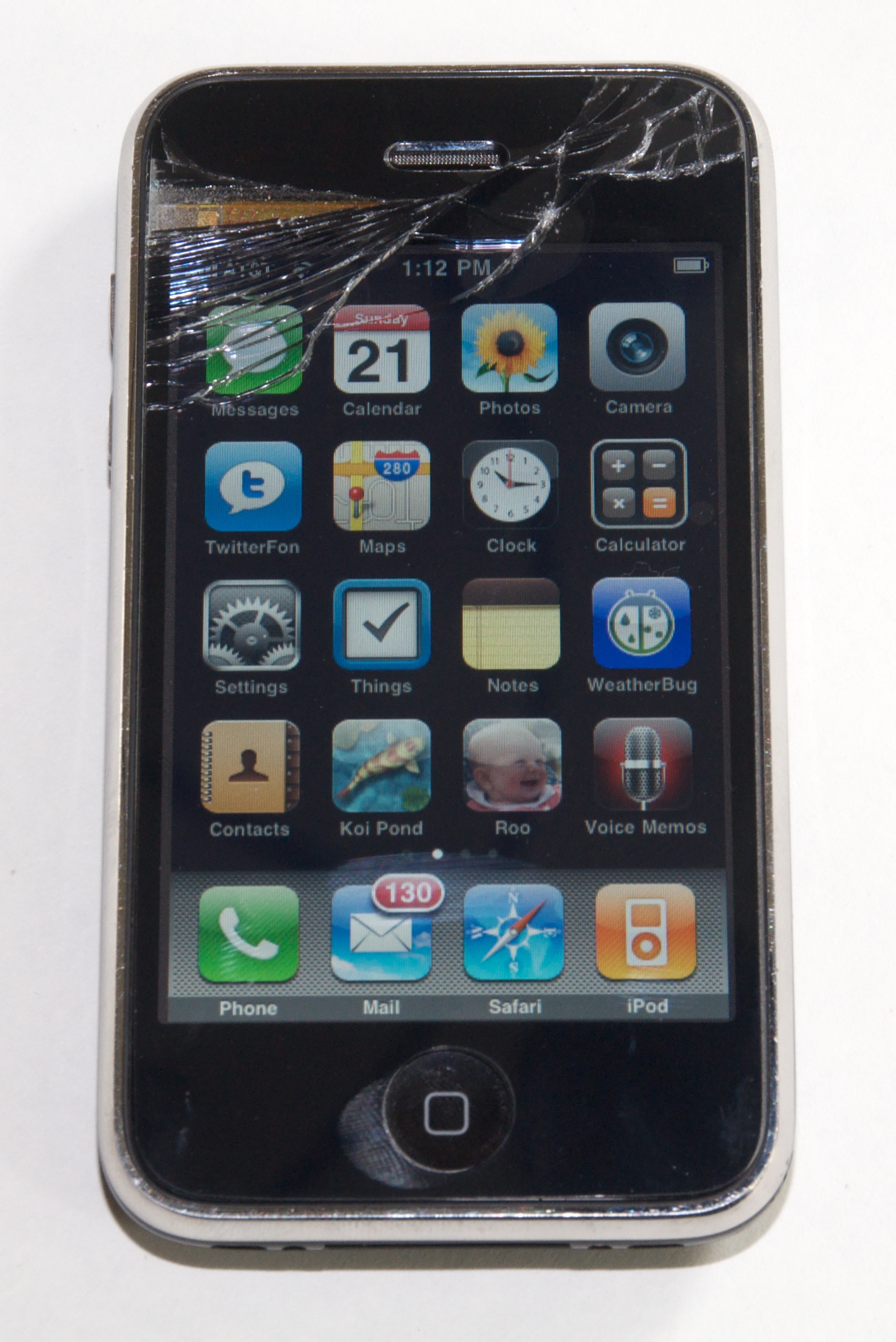 Next, I researched the options. Although the phone was still under its original warranty, according to Apple’s iPhone Service FAQ the “Limited Warranty for iPhone excludes coverage for damage resulting from accident, disassembly, unauthorized service and unauthorized modifications.” The other Apple option was to get Out-of-Warranty service, which costs $199 and results in a replacement (refurbished or new) iPhone. (According to Jim Dalrymple at The Loop, Apple is now offering screen-replacement services onsite at Apple retail stores, which also
costs $199, since it would be a non-warranty repair. That means the repair can be done without having to send it in or be given a replacement.) We could have also bought a new iPhone 3GS, but since this iPhone 3G wasn’t yet a year old, it didn’t qualify for AT&T’s least-expensive pricing.

Instead, I turned to the do-it-yourself-and-risk-destroying-the-whole-thing approach. A few minutes of searching Google led me to 3G Cracked Glass.com. Site owner Tim Dupree has put together links to companies other than Apple who can do the repair and where to get parts yourself, as well as a tutorial video on making the repair. Although the video lacks narration (which Dupree notes will be added later), I found it helpful to watch someone disassemble the iPhone. For about $80 and four hours of my time (working slowly and deliberately), I successfully fixed the screen myself.

(If you’re reading this article on the Web, click any image to view a larger version.)

The Parts — I purchased the iPhone 3G Digitizer and Front Glass with Adhesive Kit from Mission Repair for $59. Taking this route is more advanced than ordering a $119 kit that includes the digitizer, glass, and frame. In hindsight, the latter would have made for a much easier repair, but I was trying to do it myself without spending a lot of money. I had resigned myself to the likelihood that if I messed up and damaged the iPhone, I’d be paying $199 to replace it, so I wanted to reduce the cost of learning my limitations to $59.

I also bought a case opener tool from AX Micro Solutions (Directfix.com) for $3.99. Yes, it’s just a molded piece of plastic, and I also ended up paying $3.99 for shipping, and it’s silly that I had to go to a second merchant to get the part. However, I don’t have a lot of tools, and the thought of using a bare X-Acto knife to pry open the iPhone didn’t sound like a great idea. Within a week or so, I had the tools in hand. 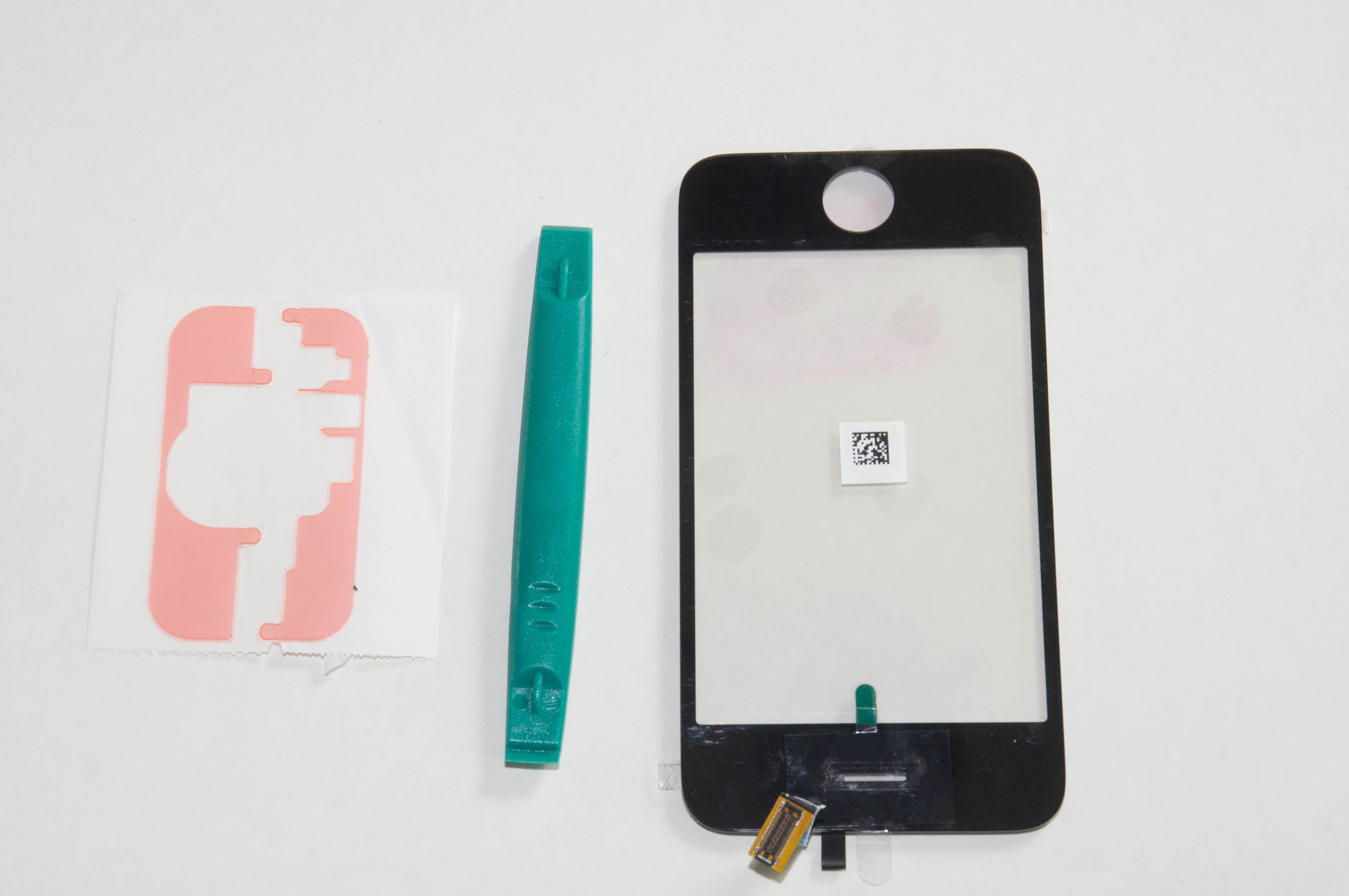 I also assembled the other tools I’d need: the SIM removal tool that came with the iPhone, or a small paperclip; a small Phillips screwdriver; a pair of tweezers; a cup to hold the incredibly tiny screws; and a small knife (more on that later). The screwdriver turned out to be a sticking point, because none of mine were small enough. You need a size #000 Phillips head (the middle one in the photo below). I ended up purchasing one at Amazon for about $6 with free Amazon Prime shipping, because not even my local Radio Shack carried one that small. 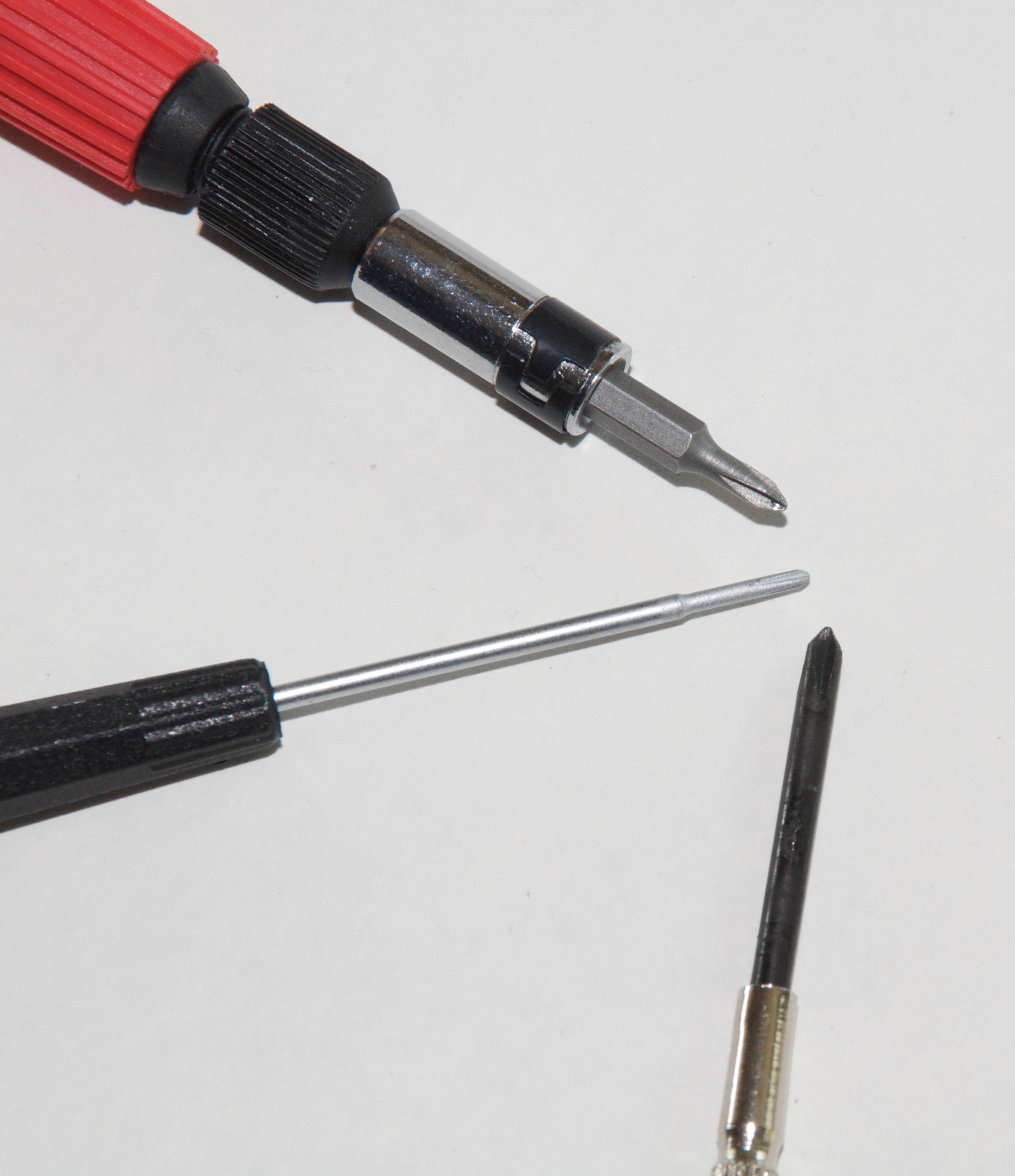 Performing the screen replacement isn’t particularly difficult, as long as you’re patient and comfortable working with small electronics. Also keep in mind that doing so voids your warranty and introduces the possibility that you could damage other components if you’re not careful.

That said, here are the steps to replace a damaged screen on an iPhone 3G. Although I suspect that the steps are similar for an iPhone 3GS, I haven’t opened mine, so I can’t be sure. I’ve included photos where appropriate, but I also highly recommend that you watch the video at 3G Cracked Glass as you go along. You can find several other videos on YouTube, too.

Open the Case — Turn off the iPhone’s power and pull out the SIM card from the top of the device. Next, remove the two screws on the bottom, located on each side of the dock connector.

The iPhone is tightly built, so simply prying it open seems almost impossible. Furthermore, the case doesn’t come apart at the seam separating the metal frame and the plastic back. Instead, press the edge of the pry tool into the seam just below the Home button. Gently pry the screen up, but don’t pull it off entirely yet, because three cables connect the screen to the lower section. 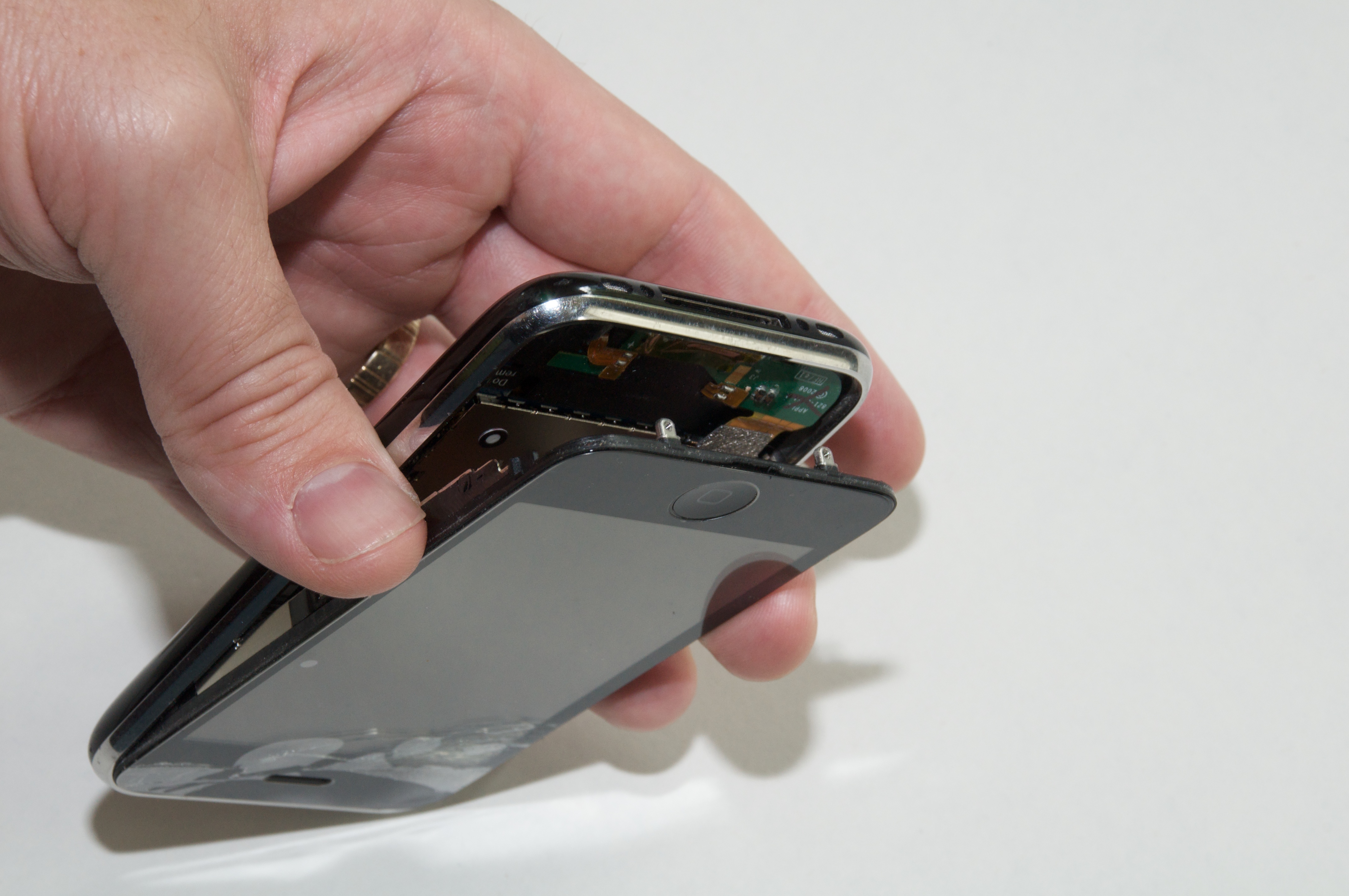 Using the pry tool or your fingers (if your fingers are small enough), remove connectors 1 and 2; for me, connector 1 lifted off by itself as I pulled the screen up, and connector 2 popped up when I placed the pry tool under its lip and gave it a little twist. Number 3 is actually a ribbon that’s anchored by a connector on the base. To disconnect it, use the pry tool to flip up the white latch and then pull the ribbon out. Set the base aside. 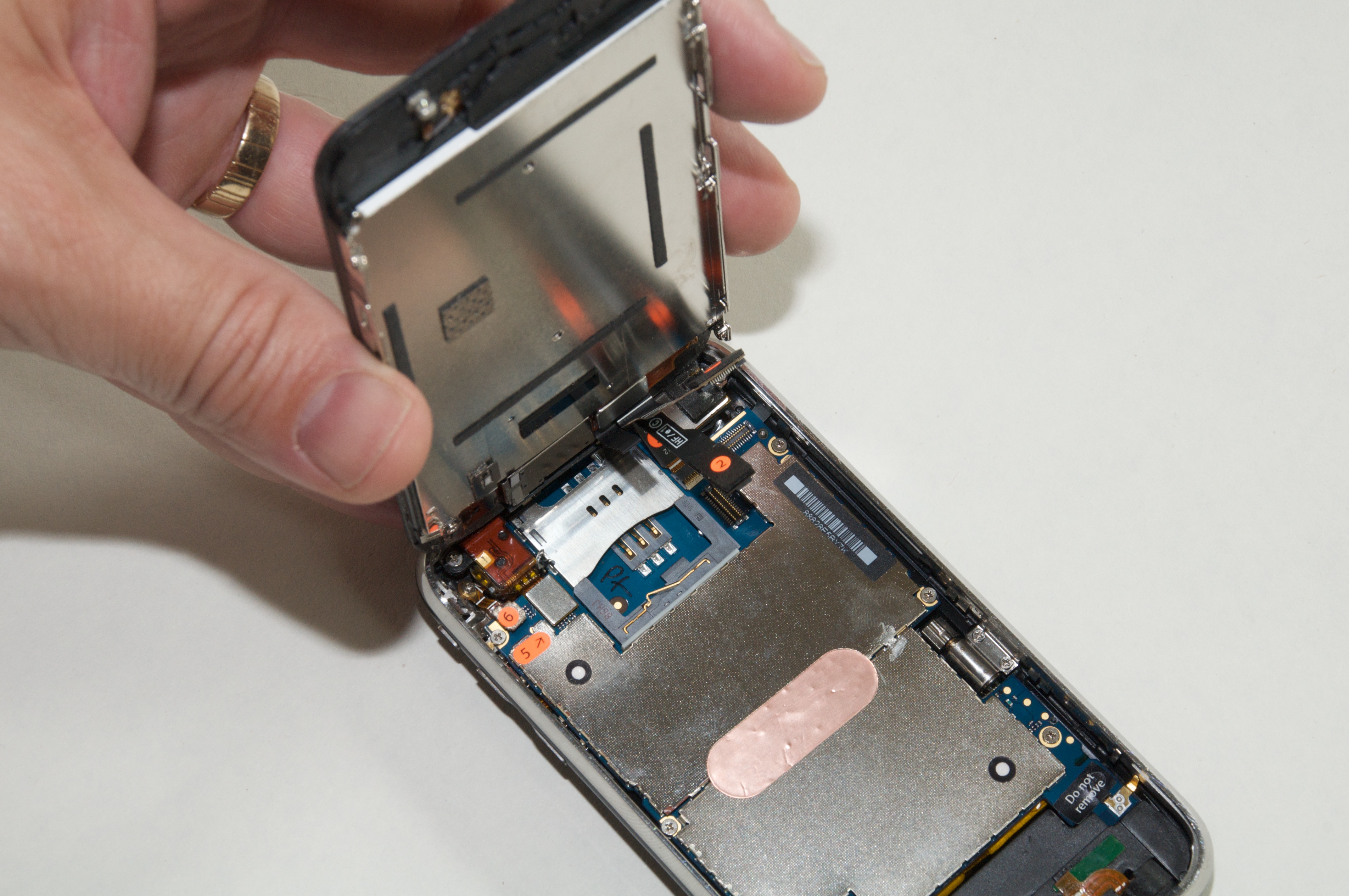 Remove the LCD Assembly — Next you need to separate the screen frame from the LCD assembly. Using tweezers, pull off the black strips of tape on the left and right edges of the frame. That exposes five screws for you to remove. One other screw is located at the top of the LCD assembly near the connecting cables. 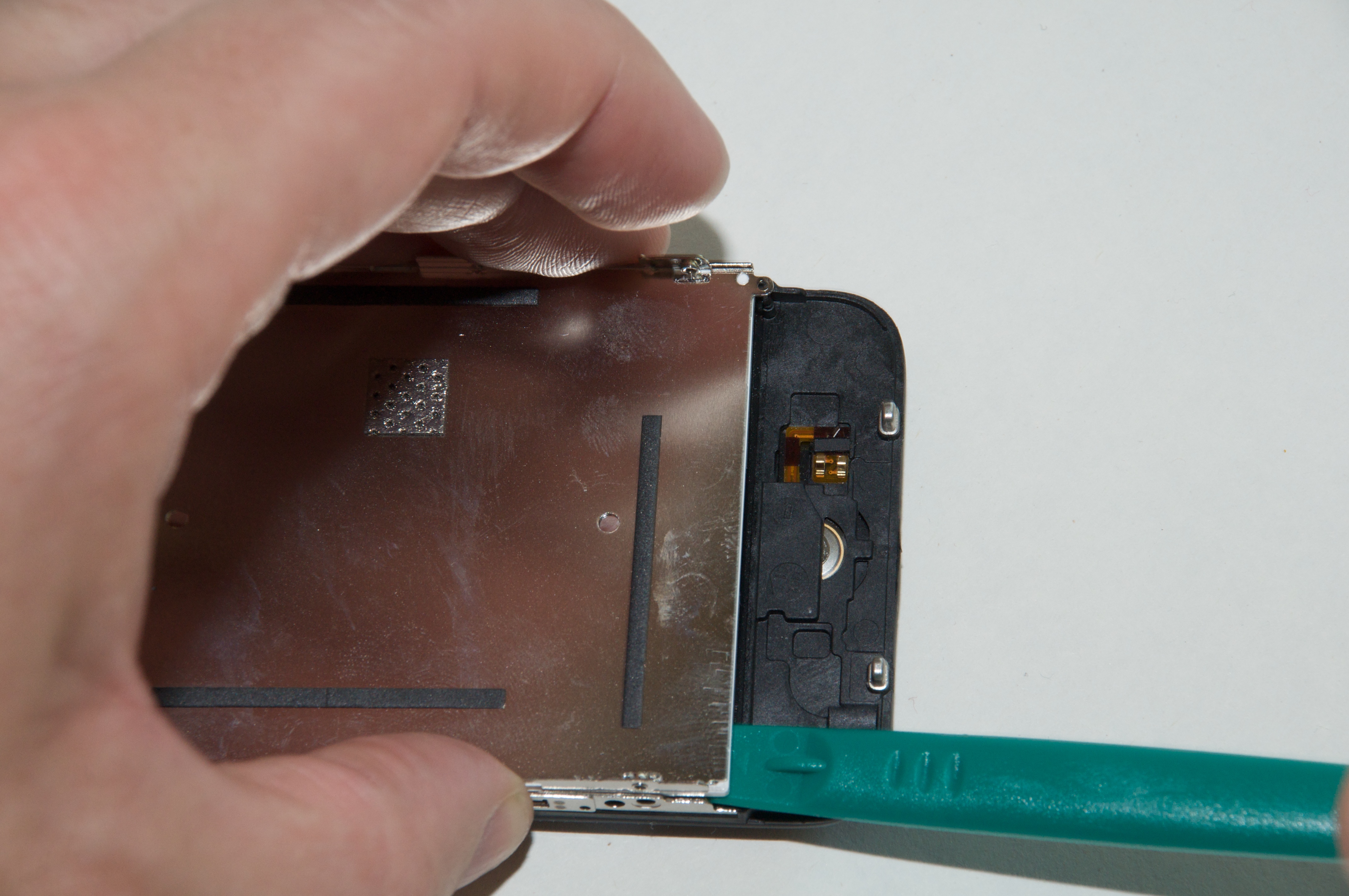 Separate the Glass — The hardest part of the entire replacement process is pulling the screen frame from the glass. The two sections are held together by adhesive, and initially appear to be just one fused part. (This step is confusing in the 3G Cracked Glass video, because the narration is not yet in place.) I slid a knife edge into the space behind the rubber seal where I originally pried the case apart. (An X-Acto knife will work, but I used a tiny Swiss Army knife.) Once I got some purchase, I gently twisted the knife blade to separate the pieces. Some tutorials on the Internet suggest using a hair dryer to heat and soften the adhesive, but I didn’t need to try that approach. Due to the broken glass, the screen did not separate from the frame in one clean piece. I had to pick apart the top section to remove it. However, the adhesive is applied in sheets, so if you can get the knife edge under the adhesive layer, the broken glass may come up together like peeling a hard-boiled egg. 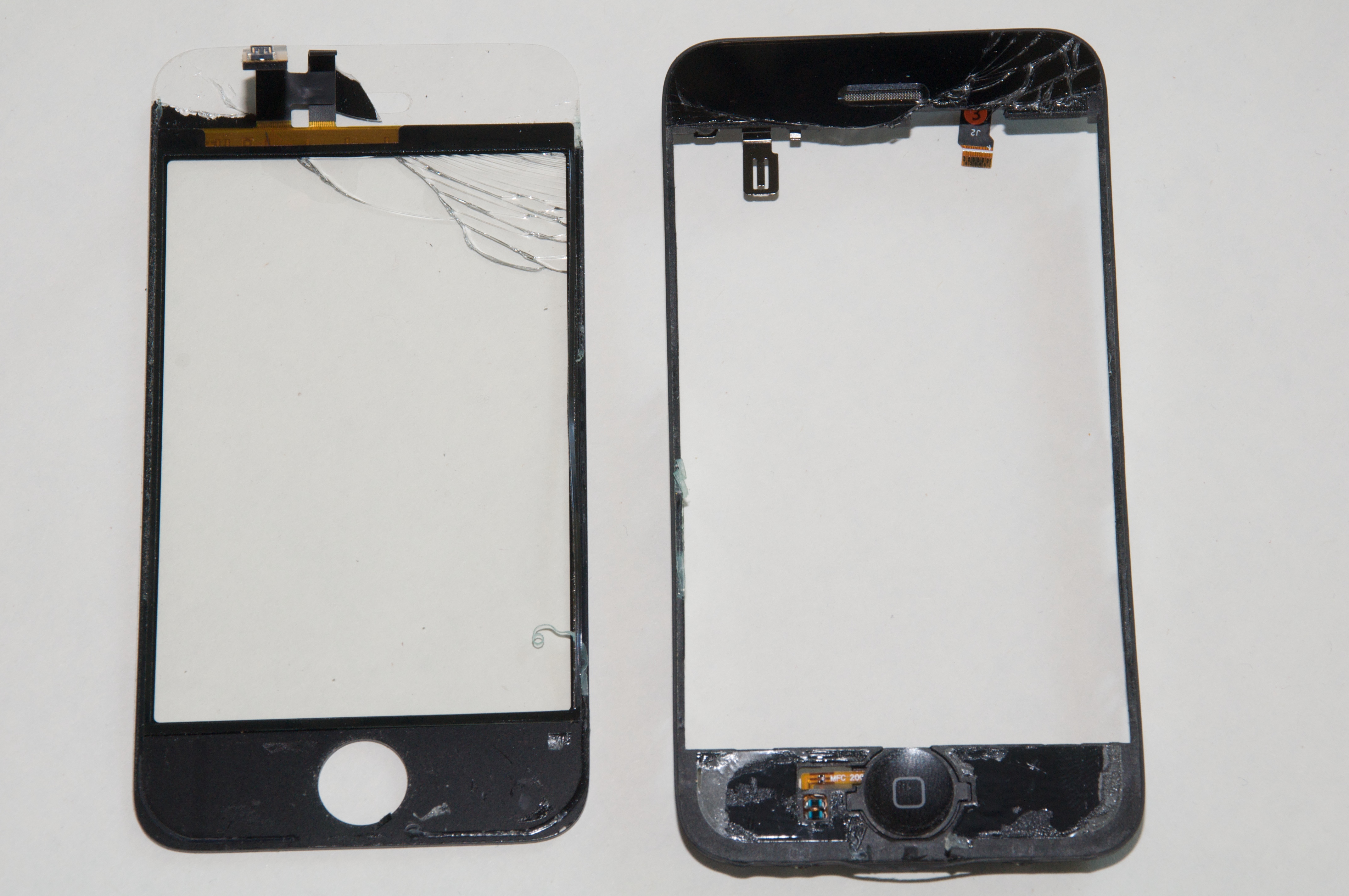 Once the glass and frame are separated, remove any remaining adhesive from the frame. 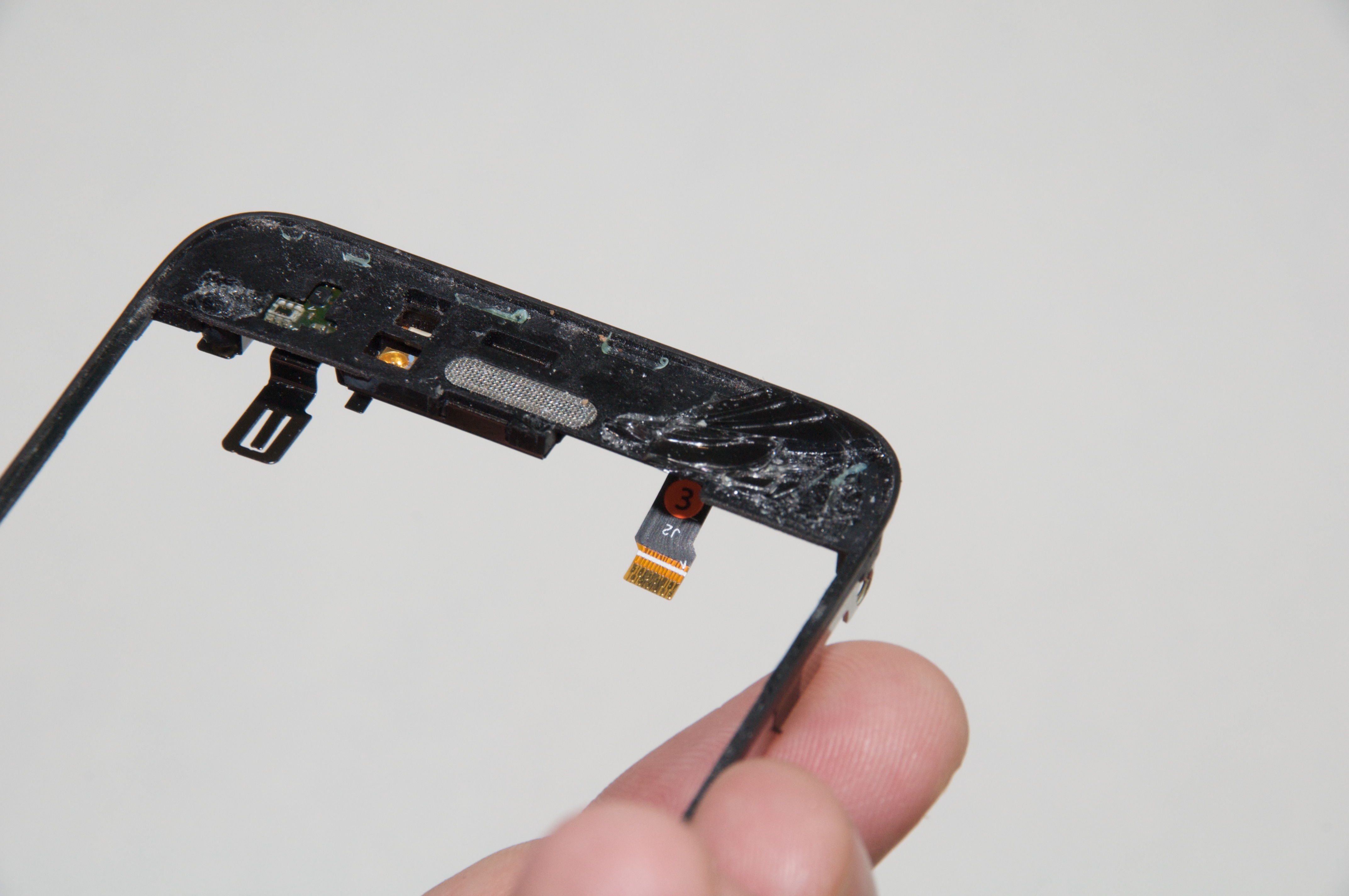 Attach the New Screen — With the old screen removed, it’s time to start rebuilding the iPhone. The new adhesive is double-sided, so apply it to the top and bottom sections of the frame and then remove the backing.

Insert the new screen into the new frame, making sure to pass the connecting cables on the replacement screen through the frame’s opening. Oh, and don’t forget to peel away the clear plastic that protects the inside of the screen.

Lastly, carefully press the new screen into place against the adhesive so you get a tight fit.

Reassemble the iPhone — After the replacement screen is attached to the frame, reverse the steps above for reassembling the phone: slide the LCD assembly into place, replace the screws, reconnect the cables, and seat the screen assembly into the iPhone’s body. Pay attention when reconnecting the cables: at one point I must have nudged connector 4, because the Home button didn’t work when I put everything back together. Opening the iPhone again to fasten the connector was much easier the second time around, however.

My wife’s iPhone 3G now looks as good as new, and I didn’t have to fall back on my alternate plan of paying Apple for a replacement. I hope I don’t have to put my new screen-fixing skills to work again, but if gravity should assert itself, I’ll be ready.

Comments About How to Replace a Cracked iPhone 3G Screen