Mozilla has thrown back the curtains on Firefox 3.5, a significant update to the most popular Web browser that’s independent of operating system makers. The tagline for the new browser is “Faster, Safer, Smarter, Better,” and in initial testing, its new and enhanced features indeed appear to improve an already good experience.

Although Mozilla provides a chart comparing Firefox 3.5 with Safari 4, results on performance are not included. That leads me to believe that Safari 4 remains the current speed champ. Nonetheless, Firefox 3.5 does feel notably snappier when working with JavaScript-intensive sites like Google Docs. Even the TidBITS site feels faster, which makes sense, given our increasing use of JavaScript to add features and improve ease-of-use.

Page rendering in general is also faster, thanks to a new version of the Gecko engine with “speculative parsing” that can load resources (such as scripts) in parallel with the rest of the page. I wouldn’t trust rendering speed benchmarks, since there are so many real-world bottlenecks that change the standard user experience, but in my short usage of Firefox 3.5, it definitely feels faster.

Safer — Security is increasingly important on the Internet, and Firefox has long had a number of essential security features, including a pop-up blocker, a constantly updated database of phishing sites, automated updates to fix vulnerabilities, detailed site information (click the site’s favicon in the address bar), and more.

New in Firefox 3.5 is a private browsing mode (Tools > Start Private Browsing) that avoids recording Web history, form entries and searches, downloads, passwords, cookies, and cache files (though bookmarks you create in private browsing mode are retained). Since it’s easy to switch in and out of private browsing mode, there’s little downside to using it when you wish to keep nosy kids from seeing where you were shopping for birthday presents. (Yeah, I know what people will really use it for, but this is a family publication.)

If you forget to turn on private browsing, you can still at least ask Firefox to forget where you’ve been. This feature, also new in Firefox 3.5, is a bit tricky to find. Choose History > Show All History, and in the Library window that appears, search for the site you want Firefox to forget. Once you find it, Control-click it and choose Forget About This Site from the contextual menu that appears. That site will be erased from your browsing history, though cookies (and possibly other information, like form entries) remain.

Firefox 3.5 also converts the previous Clear Private Data dialog to a Clear Recent History dialog (Tools > Clear Recent History), adding the capability to control the time span over which data will be deleted, perfect for clearing out what you’ve been doing on a public computer for the last few hours. 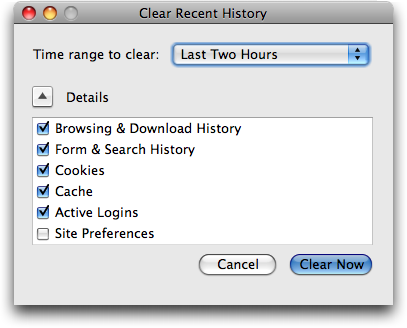 Smarter, Better — It’s a little hard to know what Mozilla was getting at with these words, but Firefox 3.5 reportedly improved the “Awesome Bar” (the address field, into which you can type nearly anything and get back something useful), the way you can tag bookmarks, and the extremely helpful session restore capability. It’s unclear exactly what changes were made there. More concrete is the improvement to Firefox’s tabbed browsing. You can now drag a tab out of a window to create a new window with that tab’s contents, a notable omission in Firefox 3.0.

Firefox 3.5 also introduces location-aware browsing, an optional feature that allows Firefox to share information about your location with Web sites. Mozilla is riding on the coattails of Google, which developed the Geolocation API and submitted it to the W3C standards consortium. As with iPhone apps, you’re asked each time a Web site requests access to your location so it’s not a privacy concern.

Geolocation works both by checking your IP address and scanning for any wireless networks within range of your computer, so its accuracy will range from a few meters to a few miles (all it knows about me so far while I use a computer inside my home is that I’m in Ithaca, NY).

A Web site could request your location from your browser via JavaScript, but it’s unlikely that a Web site would ask for this when you load a page. More likely, you’ll click on a “Find stores” or “Where am I?” link. Firefox would then display the location request at the top of the page, much as it asks if you want a password to be saved.

I can’t really see location-aware browsing being all that important, given that when I want location-specific information, I’m usually using my iPhone somewhere other than at my desk. And even when I’m travelling with my MacBook, I imagine I’d turn to the iPhone first for location-specific information. For those without location-savvy phones, this feature could be useful when you’re using a coffee shop, library, or hotel network in an unfamiliar area.

Mozilla also put a lot of effort into Firefox’s support for modern Web standards. Firefox 3.5 now supports downloadable fonts, HTML 5’s audio and video elements, the HTML 5 offline resource spec, drag-and-drop within and between Web sites, CSS media queries for media-dependent style sheets, multi-threading for speeding up Web applications, and more. As usual, these improvements won’t mean much until they’re adopted by Web developers for sites you use, and such changes tend to happen slowly because of the large number of people who don’t (or can’t) upgrade from old browsers.

Comparing with Safari 4 — Since I’m using a Mac, Mozilla’s site showed me a comparison of Firefox 3.5 and Safari 4, rather than Firefox 3.5 and Internet Explorer 8. It acknowledges that Safari 4 does an excellent job with modern Web standards, but then gives Firefox the nod in speed of response to security vulnerabilities, number of add-ons, and adaptive capabilities. 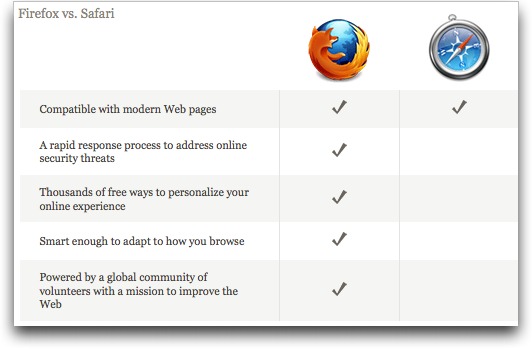 That seems fair: security updates to Firefox do appear more quickly than updates to Safari; Firefox does have far more add-ons that extend its functionality; and Firefox’s “Awesome Bar” really is far better than Safari’s “Smart Address Field,” simply because you can enter anything in Firefox’s address field and it will do something intelligent (display bookmarks or recently visited sites, go directly to the correct site, or run a Google search). In contrast, typing in Safari 4’s address field can access only your bookmarks and history, and only those by URL, rather than by name or content.

Although I appreciate Safari 4’s speed, I stayed with Firefox 3.0 and am now happy to use 3.5. For my purposes, Firefox’s “Awesome Bar” (I just can’t bring myself to type those words outside of quotes) is the key differentiating factor. Being a writer, I think in words and I direct them through my fingers on the keyboard, so it’s important to me to be able to navigate the Web via text. Also important to me is Firefox’s capability to restore sessions automatically after relaunching. Safari offers a History > Reopen All Windows From Last Session command, but I don’t want to have to remember to do that after every restart.

I recommend you take a look at Firefox 3.5. If nothing else, it’s good to have multiple Web browsers around when dealing with badly coded sites. I also like using multiple browsers when testing how Web pages render and how a site behaves when I’m logged in versus when not.

But here’s one suggestion. The main drawback that kept me from switching among browsers in the past was my bookmarks – I don’t use a lot, but I rely heavily on those I do have. There’s a free utility called Xmarks (previously known as Foxmarks) that backs up and synchronizes your bookmarks between Firefox and Safari (it also works with Internet Explorer). Thanks to Xmarks, I can be certain that Firefox and Safari always have exactly the same set of bookmarks across all my Macs, which makes it easy to use any browser at any time. Although Xmarks doesn’t claim compatibility with Firefox 3.5 or Safari 4 yet, I was able to install it for Safari 4 on my MacBook and use it to sync bookmarks back and forth
with Firefox 3.5. Your mileage may vary until Xmarks announces official support.

Firefox 3.5 for Mac OS X requires Mac OS X 10.4 or later. Note that a number of add-ons will be disabled by the update; in the past, add-on developers have responded quickly with updates. It’s a 17.6 MB download.