In his 1990 book, “The Macintosh Way,” Guy Kawasaki draws a flowchart depicting Apple’s process for creating great products. The first step in the order of operations? “Order t-shirt.”

And so, as long as Apple has been around, there has been Apple apparel to clothe its fans. To see what I mean, look no further than Gordon Thygeson’s “Apple T-Shirts: A Yearbook of History at Apple Computer” ($40). The book is chock full of photos of over 1,000 memorable and rare Apple t-shirts from over the years. But the days of great Apple tees are not gone, and there are still great Apple shirts out there today! Here’s a top ten list of my favorite Apple t-shirts you can still add to your wardrobe. 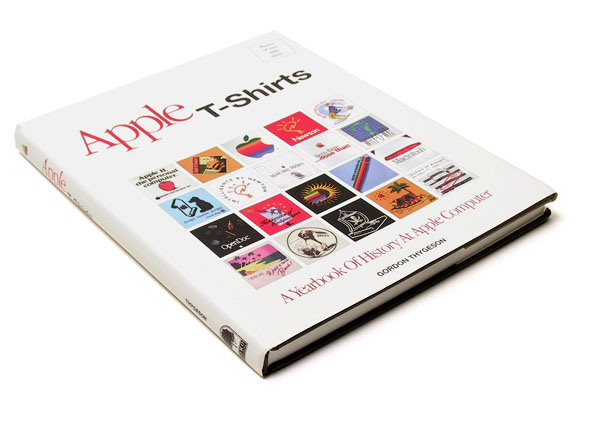 1984 Mac Ad Homage — If you’re of a certain age, you might remember watching the iconic 1984 Super Bowl ad for the first Macintosh in real time. For the rest of us, there’s always YouTube. This shirt, from FastMac, is a subtle homage to that advertisement. With its boldly colored Anya Major silhouette, the design is a nod to the Mac’s emergence to those in the know, and an intriguingly ambiguous image to those who aren’t. ($9.99) 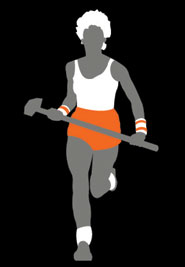 The Spinner — Imagine, every time you put on this shirt displaying the famous Apple spinning gear, it’s like you’re powering up! The simple abstract design from Bird Doctor will be instantly recognized by Mac users, but should you want to hide your geek credentials, this symbol will go undetected by those out of the (Infinite) loop. ($22) 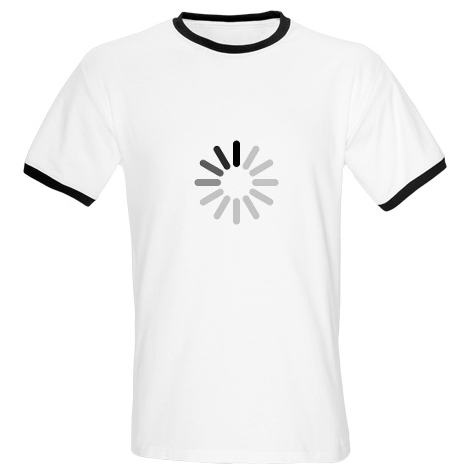 da Vinci iPhone, Exploded — Leonardo da Vinci painted the Mona Lisa, designed an ornithopter flying machine, and, according to this shirt, created the iPhone. (Well, actually, the artist is Kevin Tong, but let’s pretend.) You can also find an exploded Mac shirt as well, designed by Gary Booth, at Dion Briggs’s site. ($20) 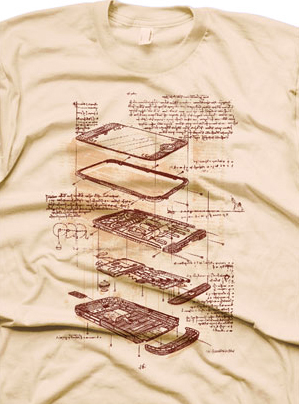 I’m a PC, Dying a Slow Blue Death — Take the Mac versus PC debate into your own hands, in a subversive sorta way with this shirt from Indie Tech. ($7.50)

Keyboard Skull — This shirt, designed by Rubyred and available at RedBubble, features a skull assembled from Apple keyboard keys. Yet, it’s only after close inspection that the Command key indicates the keyboard’s allegiance. How should one interpret the design’s meaning? It’s your call, but at the very least, it’s a good conversation starter. ($26.13) 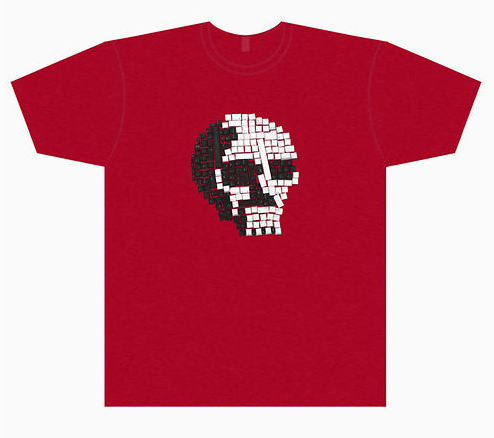 Apple Retro Rainbow — What is there to say? This classic throwback design from Geek/Science can even be printed on a faded yellow shirt to nail that early 1980s look. ($11.99) 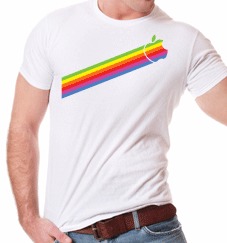 The Apple Timeline — A brief history of Apple from Insanely Great Tees: educate those around you, or simply remind yourself of where the time has gone! ($19)

Crazy Light-Up Apple Logo Shirt — Winning the award for wackiest concept, this shirt’s Apple logo responds to audio input by lighting up. Sure, you have to wear a battery pack, but the guaranteed attention it garners for you will be worth it! Unfortunately, likely for legal reasons, the shirt is no longer available at its original online store. Luckily, you can still nab one on eBay! (Buy It Now price: $31.99) 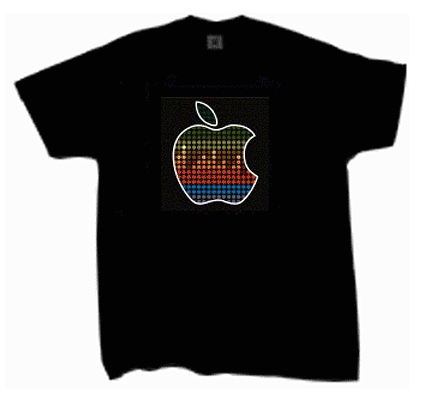 The Bomb — Experiencing an unrecoverable system error of a day? Put on your Bomb shirt from Insanely Great Tees and keep your chin up! Mac OS X’s spinning pizza of death has nothing on the original bomb symbol designed by Susan Kare. ($19) 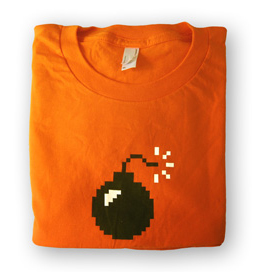 T-Shirt App — It seems like there’s an app for everything, including getting dressed. Beware, though, since you might get a few unwanted icon taps on this shirt from Zazzle. ($33.75) 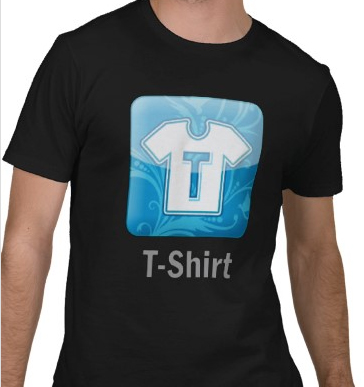 Have I missed your favorite t-shirt? While all lists must come to a close, there are certainly many more Apple t-shirts out there, hiding in dresser drawers around the world. If you’ve come across any cool Apple-related shirts that weren’t touched on here, I’d love to hear about them. Happy shirt hunting!