The App Store’s tenuous grip on sanity continues to slip. Selznick Scientific Software’s PasswordWallet is a password storage and auto-typing utility that can synchronize its files with the Mac version of the program. Sounds like exactly the sort of thing you’d want to keep young children away from, doesn’t it? If you were to believe its 17+ rating in the App Store, you might do just that.

Here’s the story. Under recently changed App Store policies, any app that enables the user to visit an arbitrary Web site, which is true of PasswordWallet and many other programs, must be rated 17+ or it will be rejected. Apple’s goal is obvious – there are plenty of things on the Web that parents might not want their young kids to see. But as is all too common with the App Store, Apple has biffed the implementation of this goal.

As you can see in this screenshot from the App Store, PasswordWallet’s capability to display any Web page awards it not just a 17+ rating, but an almost shocking array of reasons for the rating, including such parent-worrying descriptions as “Frequent/Intense Sexual Content or Nudity,” “Frequent/Intense Horror/Fear Themes,” and “Frequent/Intense Realistic Violence.” Dangerous things, those password utilities. 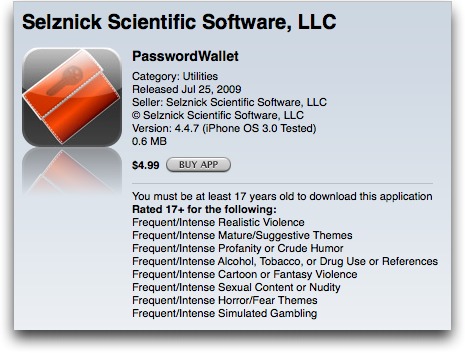 It’s certainly true that there are plenty of Web sites that meet these descriptions, but given that the iPhone’s own Safari provides access to exactly the same ghastly Web sites as PasswordWallet, it seems like overkill to splash warnings all over PasswordWallet’s page on the App Store. (Not all similar apps yet have this rating; I believe that it is being applied only to new apps and updates submitted after the policy change.)

Now, you might say, “But what about parental restrictions? Perhaps the great and benevolent Apple is just protecting the sensibilities of our tender youth, since Safari can be disabled in the Restrictions area of the General settings.” 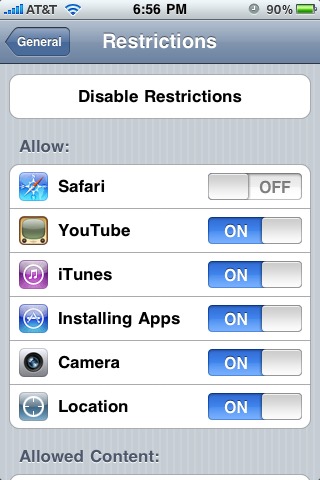 You have a point, but Sanford Selznick, PasswordWallet’s developer, is one step ahead of you. If you disable Safari in the Restrictions, it disappears from the Home screen entirely. PasswordWallet remains, but as soon as you attempt to visit a site via PasswordWallet, it reports “Content Disabled. Check your Safari Restrictions in General Settings.” 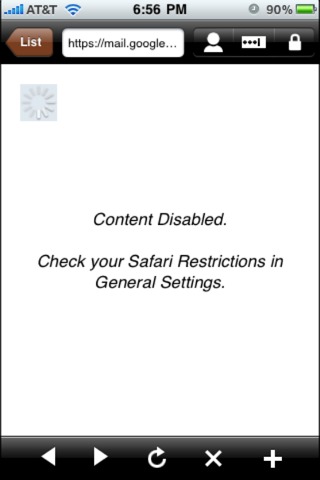 So PasswordWallet isn’t doing anything that Safari can’t do, and it’s even honoring the parental restrictions set for Safari, which should alleviate any concerns that your little nipperkin will immediately start browsing the Web for naughty pictures when you let him play with your iPhone during a boring dinner party. And if you think about it, PasswordWallet is even less prone to abuse than other apps, since it must be fed a password before any browsing can be done. In fact, it’s a useful way to bookmark sites that might be inappropriate for a kid to view without letting them appear in Safari.

But PasswordWallet’s virtues aside, every Web-enabled app in the App Store will start being branded with that scary list of descriptions, since it’s the only way to get in. That’s going to generate an increased customer support load for all such developers, will result in all these apps explaining why they’re 17+ in their descriptions, and will likely hurt sales in the short term. Eventually, the overuse of the 17+ descriptions will render them entirely meaningless, which won’t be good for the App Store in general.

Sanford tells me that he’s already started to receive a non-trivial number of questions about the 17+ rating for what seems like a thoroughly innocuous utility, so I think the process has started.

Sanford tried to explain all this to Apple, but to no avail. He submitted PasswordWallet three times, each time upping the rating after being rejected. For the final attempt, he gave PasswordWallet the highest possible rating, since each rejection took 8 to 10 days, and he couldn’t afford to keep playing the guessing game with Apple when his explanation of how he was honoring the Safari restrictions was falling on deaf ears.

One general solution to this problem is obvious and has been proposed already by Instapaper developer Marco Arment. When developers are describing their apps (Marco published a screenshot of the relevant interface), there could be an option for “Unfiltered Internet Content” that could go along with the 17+ rating on Web-enabled apps instead of the bits about sex and violence. That might not describe PasswordWallet accurately, given that it honors the Safari restrictions, but I’ll bet Sanford would far rather have his app described as allowing “Unfiltered Internet Content” than some of the nasty-sounding things it purportedly allows now. 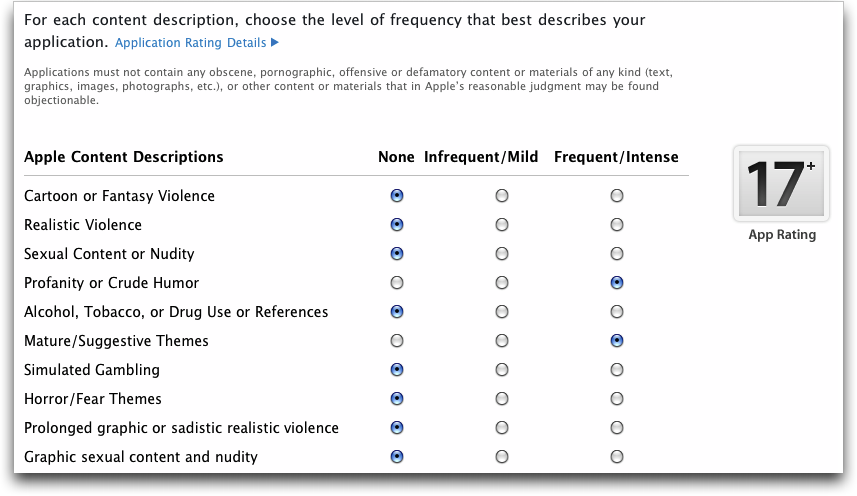 Another solution would be for Apple to realize that what Sanford has done in honoring Safari’s restrictions could be a general requirement for apps that provide unfiltered access to the Internet. That way, any parent concerned enough about Internet content could restrict access to Safari and all equivalent apps simultaneously.

Either way, we can only hope that Apple will refine this policy to make future ratings accurate and sensible so Apple’s goals don’t hurt iPhone developers or the App Store in general.