Eye-Fi has extended its line of Wi-Fi-enabled memory cards with the $60 Geo model, which combines support for iPhoto with geotagging – the addition of geographic coordinates to a photo – at a relatively low price. The location data works with iPhoto ’09’s Places feature to position photos on a map. Eye-Fi sells a line of cards from $50 to $150 with varying features; this model will be available only from the online and retail Apple Stores. 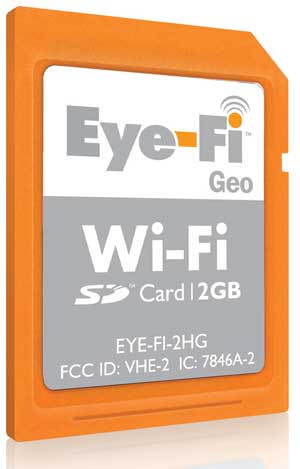 The Geo automatically either transfers images to a folder on your Mac or imports the pictures into iPhoto. For an extra $10 per year, the Geo can be upgraded to upload images over the Internet to photo-sharing services, including MobileMe and Flickr. Eye-Fi also sells a model with local and Internet photo uploading and geotagging; it costs a flat $100, and also provides video uploads.

The Eye-Fi firmware originally uploaded every photo you took to a computer or an online service. A software update earlier this year lets you use the protect or lock feature that’s available in most digital cameras to select which pictures to upload (see “Eye-Fi Pro Card Adds Raw Uploads, Computer Transfers,” 2009-06-10).

Eye-Fi embeds a Wi-Fi radio and a processor into a Secure Digital (SD) card. The Geo sports 2 GB of storage; other models have as much as 4 GB. The Eye-Fi has to be configured with the company’s software while mounted on a computer, but can then automatically connect to networks you’ve programmed it to recognize and for which you provided Wi-Fi passwords.

The geotagging feature relies on Skyhook Wireless’s system for associating a snapshot of Wi-Fi network identifiers and signal strengths with latitude and longitude – it’s not using GPS and thus will work only when you’re within range of a Wi-Fi network that Skyhook has mapped. Skyhook’s system underpins the Wi-Fi positioning feature in iPhone OS 1.1.3 and later, and is used in various Mac OS X, Windows, and Android software as well. (See “Loki Here,” 2007-06-18, for background on Skyhook’s system.)

Media Creation Networking
Cookies & Privacy: We wish we were talking about chocolate-chip cookies here, but our Web site—like nearly all others—relies on a few minor digital cookies. Various laws around the world require us to tell you that fact, so consider yourself informed, if not nourished. By continuing to use this site, you agree to our use of these cookies. Cookie and Privacy Notice