SMS messages on the iPhone are priced usuriously at 20 cents each in the United States unless you pay for a monthly SMS plan, but there’s no question that they’re useful. That’s largely because the recipient is notified as soon as they arrive, but the interruption is minor in comparison with a voice call.

With the addition of push notifications in iPhone OS 3.0, many of us started looking for ways we could avoid SMS charges while still enjoying SMS’s basic functionality. The first possibility was a new version of AOL Instant Messenger that offers push notification of incoming messages (see “AIM for iPhone Adds Push Notification,” 2009-06-24). But with AIM for iPhone, you must sign in explicitly, and even though you can remain signed in for 24 hours, it still requires that you remember to sign in repeatedly and that your friends also be signed into AIM.

Thanks to a new $2.99 iPhone app called Boxcar, there’s an alternative. Boxcar is a special Twitter client that, once you’ve installed the app and connected it to your Twitter account, sends you push notifications of direct messages and @ mentions. Boxcar is rated at 17+ because Apple requires that all Internet apps be so branded, but the only mature content you might see is that sent to you by your Twitter friends (see “Apple: Web-enabled iPhone Apps Aren’t for Kids,” 2009-07-28). 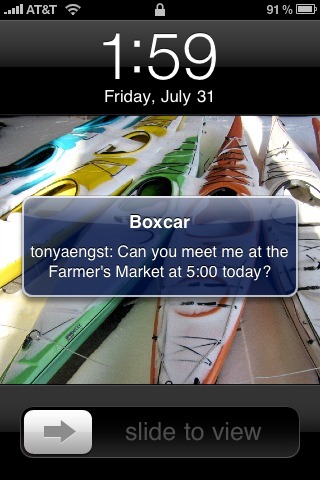 (In Twitter, if you want to reply to someone publicly, you start a tweet with their username, prefixed with an @ sign; the @username convention is also used within tweets as a way of linking the tweet to that person. Boxcar picks up all @ mentions, regardless of where in the tweet the username appears. To send a private, direct message to someone you’re following and who is also following you, start the message with a D, followed by a space and the person’s username.)

Boxcar is utterly simple. A settings screen lets you select whether you want to be notified of direct messages and/or mentions, and it also lets you choose from a set of popular iPhone Twitter clients for reading incoming tweets; the main utility there is easy of replying to mentions in a familiar interface. Unfortunately, Boxcar can only launch another Twitter client; it can’t actually get the client (at least with Twitterrific) to display a particular tweet. 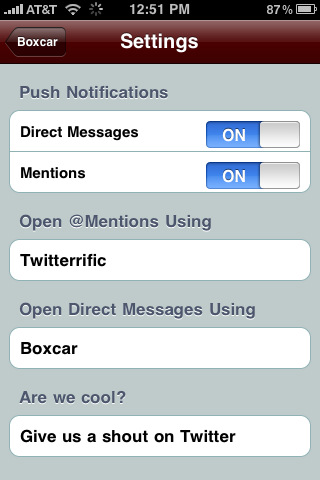 Boxcar also provides a list of people with whom you’ve traded direct messages, and tapping one shows the messages to and from that person, in an iChat balloon-style interface. You can easily reply to a direct message from within Boxcar itself, so you may prefer to have direct messages open Boxcar instead of another client. 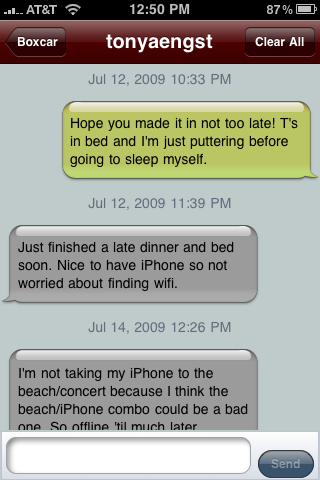 You control how you’re alerted to notifications in the iPhone Settings app, in Notifications. I’ve turned off sounds, since even though I have the ringer off on my iPhone nearly all the time, even hearing the iPhone vibrate can wake me up if I have it in the bedroom (which I often do, since it makes a good alarm clock). 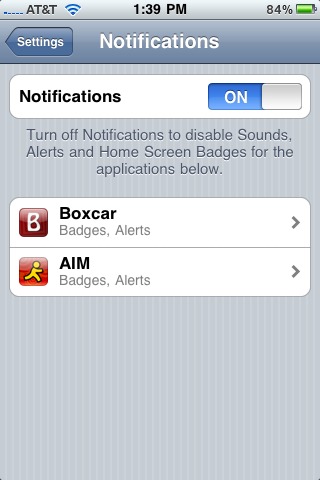 In my testing, Boxcar worked perfectly with direct messages, showing alerts with only a 20-30 second lag in comparison with when I saw the message in my email, and often faster than it appeared in TweetDeck. With mentions, Boxcar worked, but if two messages come in at the same time, one won’t appear as a push notification. Of course, it does appear in your Twitter client, so it’s not lost, just not displayed at the main screen.

I’m not certain how much control Boxcar’s developers can exert over push notifications, since I’m still becoming accustomed to them. If it were possible, I’d love to see Close and View buttons associated with each notification, much like Calendar notifications, rather than being forced to unlock the phone and go to a particular app. After all, with a Twitter message, you can likely see the entire thing in the notification.

More generally concerning is what will happen when there are too many apps pushing notifications to my iPhone. The current interface for displaying and handling push notifications clearly won’t scale, so hopefully Apple has something else in mind for iPhone OS 3.1. TechCrunch devoted an article to this worry recently as well.

Of course, for Boxcar to be useful, the people you want to be able to contact you must be able to use Twitter. Though it’s free and easy to use Twitter, it’s certainly less ubiquitous than SMS support across the mobile phone industry. For my purposes, though, the vast majority of people with whom I would want to trade SMS messages use Twitter much more commonly, so it’s not a significant limitation.

Other Apps — As is unfortunately common in the App Store, when I found Boxcar, it was the only app providing push notifications for Twitter. Going back into the App Store after a few days of testing, I see that there are at least several other similar apps. The $1.99 iTweetReply looks quite similar (but claims to queue multiple notifications and offer badge-number updates), as does the $0.99 Tweet Push (although it requires a separately funded account and charges on a per-notification basis), whereas the $4.99 SimplyTweet appears to be more of a full-featured Twitter client.

In time, I imagine that most Twitter clients will offer push notifications of direct messages and mentions, but until then, Boxcar or one of these other apps will give you the immediacy of an SMS message without the cost.