Tr.im has seen the price of success and wants no part of it. The well-known URL shortening service, which takes long URLs and turns them into brief ones, has seen usage skyrocket, but says it was unable to find a means of turning that into revenue or finding a buyer for the site at even a nominal price. Tr.im’s developer, The Nambu Network, notes on the tr.im home page that old redirects will continue to work until at least 31-Dec-09.

Like other such services, tr.im leverages browser redirection, taking a short URL and redirecting to a long one. Many content management systems and blogging systems (like Movable Type and WordPress) produce extremely long, human-sensible URLs based on the title of a post or article. (TidBITS opted long ago for pithiness, moving to our current /article/ plus number URL when we transitioned to our homebuilt TidBITS Publishing System several years ago.)

Twitter’s 140-character limitation accelerated the need for URL shortening services since some URLs are themselves more than 140 characters, and even reasonable URLs significantly limit what you can write in the remaining characters. Twitter shortens URLs automatically for tweets published via the twitter.com Web site; in May 2009, Twitter switched to using the bit.ly service in place of an early shortening service with a longer domain, TinyURL.

The folks at tr.im seem rather bitter with Twitter on the company blog, where they note that Twitter’s anointing of bit.ly prevents tr.im from succeeding in the long run no matter what else might happen. Bit.ly raised $2 million earlier this year, according to TechCrunch.

It’s ironic that TinyURL.com is now a long domain name compared to tr.im, is.gd, or bit.ly. Also interesting is that our article “The Incredible Shrinking URL” (2006-02-06) lists several other services, none of which have broken out into enormous usage in the intervening three years. No first mover advantage, apparently.

Shortening services associate a long URL with the shortest possible code corresponding to that link, which is maintained in the shortener’s database. A request for that URL from the shortener automatically redirects to the destination.

A 4-character code comprising uppercase and lowercase letters and the digits 0 to 9 can represent nearly 15 million different possibilities (62 to the 4th power). Some services provide add-ons, such as accounts through which you manage URLs, updating destinations when they change, and viewing statistics.

Third-party Twitter clients all offer URL shortening as well, though they often give users a choice of which service to use. Tweetie, for instance, lets you choose among five options, including tr.im.

Other utilities tie into URL shorteners, as well. For instance, SmileOnMyMac’s TextExpander includes AppleScript scripts that use four services’ interfaces – including tr.im – to read a URL and return a shortened locator. (TextExpander includes this capability in one of its predefined group sets, Internet Productivity Snippets, which the company has already updated to remove tr.im. Open the TextExpander preference pane, select the Internet Productivity folder, and click Update Now.) Such programs will need updates, or users will have to stop using tr.im within them. 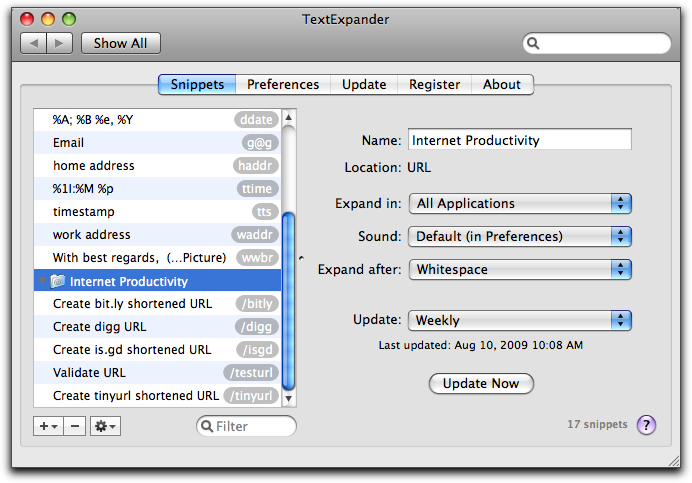 It’s hard to make money from URL shortening because the service performed is non-unique and trivial to replicate. Creating a redirection converter and database would take only minutes; tacking on a simple Web front end wouldn’t require much more work. The hard part is providing a reliable service that works quickly and doesn’t expose users to undue security risk.

Because there are so many services to choose among, users have never tolerated ads that appear as part of the redirection process. Thus, the redirection service has no way to realize advertising or other revenue from those clicking through.

Add-on options have some revenue-generating potential, especially for those wanting analytic data – precise clickthrough tracking – but only a tiny fraction of all users care about such features.

It’s likely that future upgrades to Web sites and associated posting software will simply incorporate the idea of every page having both long and short URLs. A publication like TidBITS could register a tiny URL of its own – tb.cz or some such – and with a few lines of code avoid the need for any third-party redirector at all.