The iPhone OS 3.1 release provides incremental improvements for all iPhone and iPod touch models, the most significant of which is the addition of app recommendations. The release also adds the capability to buy ringtones directly from an iPhone, enables you to organize and lock where applications appear, fixes security holes, and lets you lock your phone remotely via MobileMe.

Programming Genius — With over 75,000 applications in the iPhone App Store, finding new apps can be daunting. Apple has used the iPhone OS 3.1 release to expand its Genius music and video recommendation feature to offer app suggestions within the device’s App Store app. Unlike “Staff Suggestions” or “Hot Picks,” these recommendations are based on the apps installed on your device and the app libraries of other users with similar tastes.

Although the iPhone has long supported purchased and custom ringtones, you had to manage and synchronize the files via iTunes. Users can now directly purchase and download ringtones on the iPhone through the iTunes app for $1.29 each.

Apple announced that over 30,000 ringtones are available from all four major music labels. You can still create your own custom ringtones from any DRM-free song or audio on your Mac using GarageBand and other applications, but you’ll need to sync them manually through iTunes.

Remote Lockout — The iPhone OS 3.1 update also adds a feature that folks who suspect their iPhone or iPod touch has been stolen are going to love: a remote lock feature via MobileMe.

iPhone OS 3.0 brought the Find My iPhone feature that plots the location of your stolen or missing device on a Google map using GPS, Wi-Fi, and cellular positioning – whatever is available (see “Find Your Lost iPhone or iPod touch with iPhone OS 3.0,” 2009-06-17).

Find My iPhone also lets you display a message on the remote phone or wipe its contents. But there was a flaw: wiping the original iPhone or the iPhone 3G could take hours; the iPhone 3GS with hardware encryption takes just seconds. Thus, the new remote lock feature.

Via MobileMe’s Settings view, you can enable a passcode on your phone. Select the Settings view, then click Find My iPhone. Underneath a map of your device’s location (if available), a new Remote Passcode Lock section appears (only for devices updated to iPhone OS 3.1). Click Remote Lock, and a dialog appears in which you enter a passcode. Enter it twice and then the device is immediately updated and locked. 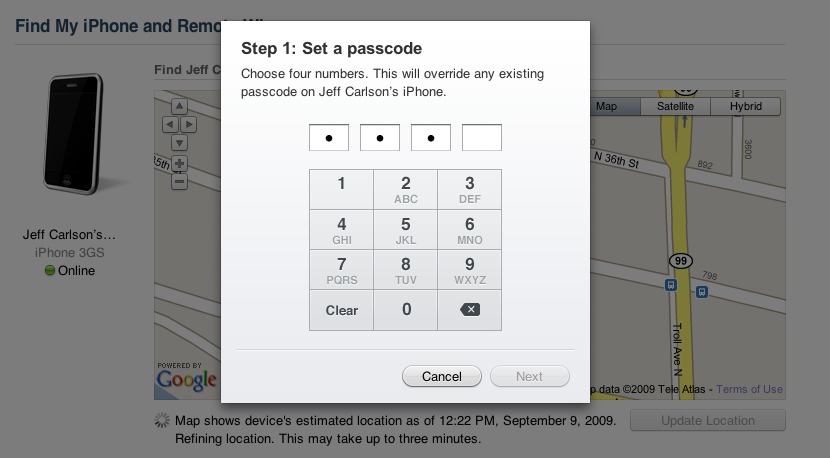 To use the missing iPhone or iPod touch, you must enter the new code, which overrides any previous code you had set. With such a security code in place, a thief would be unable to use the phone or access stored information. His or her only option would be to power the phone off to disable the Find My iPhone feature.

Paired with this new feature, fortunately, is a security fix. Earlier iPhone OS software had a flaw that could allow a cracker to bypass a security code with relative ease. Rich Mogull wrote about this problem in “iPhone 3GS Hardware Encryption Easy to Circumvent,” 2009-08-07; Apple’s iPhone OS 3.1 security notes say that this problem has been fixed.

Pin Apps on the Screen — The last major improvement in the iPhone OS 3.1 update is support for the new app organization feature in iTunes 9. This long-awaited enhancement finally lets you organize your iPhone and iPod touch applications within iTunes, then synchronize them with the device.

All of us with more than a few screens of applications issued a collective sigh of relief with the realization that we’ll no longer have to battle our phones to keep our applications where we’d like them.

This iPhone OS update also includes several security fixes, such as the already noted passcode problem, the elimination of the “SMS of Death” (an SMS message that could break network connectivity), and a problem with lookalike characters making a malicious domain look legitimate, among other repairs.

Worth an Upgrade — Although many of these updates are primarily to support the new features of iTunes 9 (and to sell you more apps and ringtones), iPhone OS 3.1 appears to be a worthy upgrade with a collection of much-appreciated usability enhancements.

iPhone OS 3.1 is available only via iTunes, where it’s a 302 MB download, and it requires a lengthy installation process, so set aside some time before updating. For unknown reasons, the update is numbered 3.1.1 for the iPod touch.