By now you’ve probably gotten a glimpse at the big cat Apple has been touting as the face of its new operating system, Snow Leopard. But did you know that the real snow leopard is a highly endangered species? With dwindling population numbers in the wild estimated to be between 3,500 to 7,000, this native of Central Asia is facing extinction. 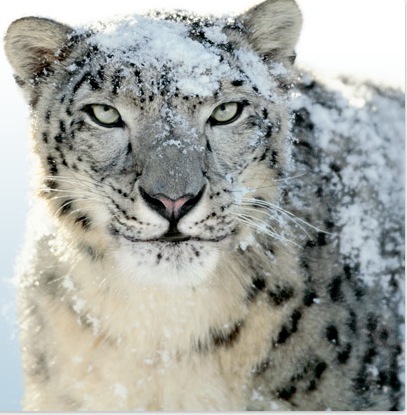 The snow leopard is a beautiful cat with big paws, a thick fur coat, and a long tail used for balance in its mountainous roaming. Bearing the moniker Spirit of the Himalayas, its natural habitat encompasses the mountains of central and south Asia including parts of Mongolia, India, Pakistan, China, and other countries. Solitary animals, snow leopards usually live 15 to 20 years in the wild.

Since 1972, the snow leopard has been identified by the International Union for Conservation of Nature as an endangered species – right up there with the panda, the blue whale, and the albatross. Today, their habitat continues to be encroached upon by agricultural needs; they’re poached for their pelts; and they’re killed by farmers looking to protect their livestock.

Fortunately, other people are looking out for the snow leopard.

Conservation Groups — Two main groups are currently devoted solely to the snow leopard’s plight. Founded in 1981, the Snow Leopard Trust is one of the world’s leading authorities on the study and protection of the snow leopard. With a large staff spread over five snow leopard range countries, the Trust is attempting to affect change at the country level. In 2008, the Trust also began a long-term research project that seeks to gain a stronger grip on the issues facing snow leopards by better understanding their living habits.

The Snow Leopard Conservancy is the other main source of snow leopard conservation efforts. The Conservancy focuses on enhancing the stewardship of alpine ecosystems within communities that provide habitat (and easy prey via livestock) for snow leopards. The Conservancy’s stated challenge is to seek “ways of helping local people regain their willingness to co-exist with large predators.”

What Could Apple Do? While it is by no means Apple’s responsibility to take part in the efforts to protect its latest operating system’s namesake, the company has a great opportunity to help a worthy cause. Given Apple’s recent efforts to become a greener enterprise, embracing the snow leopard as its current-day mascot and supporting efforts to save the snow leopard from extinction would help underscore other green efforts like eliminating BFRs, PVC, and mercury from its iPods and computers. The financial planning company Pacific Life provides a good role model of a company giving back to its brand icon, which in their
case is the humpback whale.

Most simply, Apple could just help raise awareness of the issue with an educational box on its Snow Leopard page. Given that many people don’t even know the snow leopard is endangered, even a simple effort like this would go a long way.

“That means doubling the impact for your gift,” Brad Rutherford, Executive Director of the Snow Leopard Trust, told me via email. “Gifts big and small are important to us. $5 is enough for us to track a snow leopard for one day using GPS technology, and $1,000 is what it takes to protect one snow leopard in Kyrgyzstan for one year.

Some Mac-related organizations have already stepped up to the plate. Apple resellers Tekserve in New York City and Monterey Bay Computer Works in California have already contributed to the Snow Leopard Trust’s fundraising program. Tekserve donated the proceeds from the first 100 copies of Snow Leopard it sold. Select ASMC (Apple Specialist Marketing Co-op) retailers are also helping out by promoting snow leopard “adoptions” in their stores. It would be great to see Apple join these Apple resellers and take an active role in encouraging and promoting
the protection of the snow leopard.

What Can You Do? Don’t feel you have to wait for Apple to make a move, because there’s plenty you can do right now to help snow leopards. Aside from making an individual donation to one of the organizations mentioned above, you could “adopt” a snow leopard (via either the Trust or Conservancy), donate your old car to raise funds, or purchase crafts made by people living in the snow leopard habitat to help alleviate the economic pressures that lead herders to forcibly protect their livestock (the craftsmen must abide by jointly negotiated conservation agreements that protect the cats and their key prey).

Additionally, if you really want to get involved, consider volunteering for either the Trust or the Conservancy. The Trust in particular has noted that it needs volunteers to help expand their social network presence, develop presentations, write and distribute press releases, and host fundraising events.

And though it may seem small, simply spreading the word about the snow leopard’s endangered status – whether by conversation, email, or Twitter (I recommend linking to this obscenely cute video of snow leopard kittens at Seattle’s Woodland Park Zoo) – can have a real impact. (And if you go to Woodland Park Zoo yourself on the right day, you might even get to see TidBITS Managing Editor Jeff Carlson and his daughter Ellie masquerading as snow leopards.) 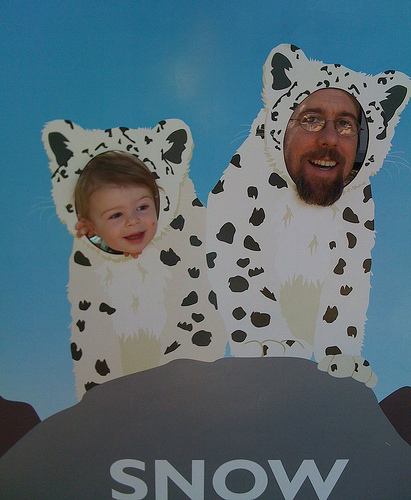 Brad Rutherford was up front about the possibilities. “Support from Apple, its retailers, and Mac users has the potential to make a huge, immediate difference in protecting snow leopards,” he said.

So next time you boot up Snow Leopard, take a moment to think about those big cats prowling around the Himalayas, and hopefully, they’ll still be with us long after Apple has moved beyond big cat operating systems.