AT&T has launched a Web site with details about its 3G MicroCell, a home cellular base station that provides enhanced coverage in your home for regular AT&T 3G mobile phones (including the iPhone), routing calls over a broadband connection. Such femtocells, as they are called in the industry, use licensed frequencies owned by cellular companies to improve signal strength and thus voice call quality. 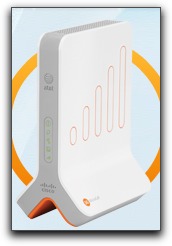 Details slipped months ago about AT&T’s plan for such a home base station, which AT&T has been testing with an unknown number of customers and its own employees. The Web site requires a ZIP code to check for availability, and AT&T said – according to Engadget – that only Charlotte, N.C., residents are currently eligible. Still, this marks a transition into commercial availability.

These tiny base stations support voice and data connections via any 3G-capable phone that can work on AT&T’s cellular network. This is distinct from T-Mobile’s longstanding unlicensed mobile access (UMA) service, which uses ordinary Wi-Fi for the local connection, but requires one of a dozen or so specially designed dual-mode handsets and smartphones offered by the company. (T-Mobile’s UMA handsets now typically cost no more than regular 2G and 3G phones.)

Femtocells require a GPS receiver, and typically come with extremely long antennas. The GPS provides emergency E911 call location to operators, but also confirms the location of a femtocell, necessary to ensure that a carrier employs only the frequencies for which it’s licensed in a given geographic area – and that the base station isn’t used illegally outside the United States.

InformationWeek reported that the 3G MicroCell will cost $150, but that AT&T will provide a $100 rebate for customers who sign up for a calling plan. Engadget reproduced a price sheet that shows AT&T offering unlimited calling with the base station at $9.99 per month for AT&T landline and broadband subscribers, and $19.99 per month for all others. Engadget relayed news from AT&T that the price is in testing, too.

Sprint and Verizon both offer femtocells. Sprint charges $99.99 for the base station, $4.99 per month for its use in improving coverage, and an additional $10 per month for unlimited calls on an individual or family plan. Verizon charges $249.99 for the base station, with no monthly fee but has no calling plans available. With AT&T’s pricing options, the company is essentially offering both kinds of services: for $150 flat, you get better coverage; for $50 and a monthly fee, you get coverage and unlimited calling.

Sprint and Verizon offer only 2G voice calling with their femtocells. The AT&T 3G MicroCell, as one might guess from its name, works with 3G voice and data. While 3G smartphones from AT&T almost all include Wi-Fi for the data side of the equation, the cheaper, so-called “feature phones” with 3G support commonly lack Wi-Fi, although that’s starting to change with newer models.

Carriers love femtocells because they shift traffic (and the expense of moving calls and data) from their expensive-to-operate, capital-intensive cellular networks to cheap broadband – broadband that the customer has installed and paid for separately.

However, cell subscribers may grow to love in-home base stations for a similar reason: they’ve already paid for the broadband, and the additional load of voice and data calls is negligible, while the reward of unlimited calls – without paying significantly higher monthly fees – and better reception seems of high value.