After a long delay, AT&T has finally enabled its MMS (Multimedia Messaging Service) for the iPhone 3G and iPhone 3GS. The lag between announcing the feature at the iPhone OS 3.0 rollout in March and now was due to the anticipated data demands placed upon AT&T’s already straining cellular network – a strain directly attributable to the iPhone. (See AT&T Plans for Mobile Data Onslaught, 2009-05-28.)

Despite these concerns about network stress, there were no reports of outages or other problems on the launch day. Problems were anticipated as iPhone users tried the feature for the first time, like the stress on city sewer systems during Super Bowl commercials. AT&T appears to have prepared well.

MMS is included in your cellular plan’s Text Messaging option, which is priced from $5 per month for 200 messages to $20 per month for “unlimited” messages; text and multimedia messages are counted the same. In a text message sent to iPhone users over the weekend, AT&T said that iPhone owners with no message plan would be charged $0.30 for each MMS message sent or received.

AT&T notes that “original iPhone customers will continue to use the www.viewmymessages.com site to receive picture messages.” The problem is, AT&T got their own URL wrong. It’s “www.viewmymessage.com/1”, which redirects to a real AT&T page where you must enter a message ID and, presumably, your account password.

While MMS has many of the same properties as and more limitations than a rich, HTML email message, there’s less friction in using MMS. This is intentional, as MMS is a huge boon for carriers in terms of profit margins, which are very high. A 1 MB email message containing several photos would cost nothing to send on an iPhone (included in the flat-rate data plan), whereas a 100 KB MMS message requires a messaging subscription plan or incurs the $0.30 fee without. You can see which the carriers would prefer.

Updating Your iPhone — To get MMS functionality, you need to connect the iPhone to your computer and, in iTunes, click the Check for Update button. You’ll be prompted to download an update to the carrier settings. The download is small, so it should take only a few seconds.

Sync the iPhone and then restart it: hold the power button down for a couple of seconds, then slide the power off switch that appears; count to 10, then press the power button again. (TidBITS reader Steven Riggins points out that you can instead merely use the Settings app to put the iPhone into Airplane Mode and then switch back to regular mode to reset the iPhone’s radios.)

Sending and Receiving MMS Messages — When you next launch the Messages app, a camera button appears to the left of the text field. Tap that button to choose between taking a photo with the built-in camera or selecting a picture (or a video if you’re using an iPhone 3GS) from your photo albums. After you select an image or video, enter a text message and tap Send. 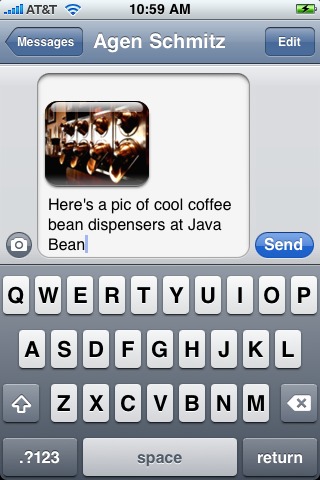 Other apps on the iPhone tie into the MMS feature. In Voice Memos, select an audio recording and tap the Share button to see a new MMS button in addition to the Email option. The MMS button also appears when sharing media in the Photos and Camera apps, and when sharing locations in the Maps app (tap a location pin to view more information and then tap the Share Location button).

When you receive an incoming MMS, it appears with the media. In the Messages app, you can also tap the item to view it full-screen. 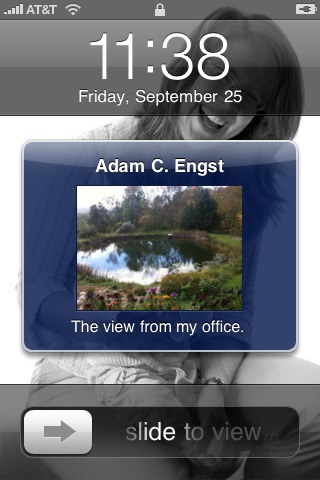 Using MMS is optional. If you have no interest in sending or receiving multimedia and don’t wish to be charged for messages others send you, go to Settings > Messages and turn the MMS Messaging option off.

Being able to send more than just images makes MMS more interesting than I first imagined, since it allows me to send a location to an iPhone-using friend, who can then tap the Map URL field to view the position in the Maps app. (I can’t tell how the same message sent to another phone will work.) I’ll probably continue to share photos and videos using Flickr or MobileMe, but I also like having options.

Comments About Enable MMS on the iPhone in the United States