Few programs have as long a history as StuffIt Deluxe, the venerable compression and archiving utility now developed by Smith Micro, and the latest version, StuffIt Deluxe 2010, brings to the program a welcome integration with the Internet via the new StuffIt Connect service.

It’s interesting – although the Mac world as a whole no longer relies on StuffIt as much as it used to before Apple built Zip compression and expansion into Mac OS X, I often hear comments expressing an inexplicable disdain for StuffIt Deluxe. I’ve never quite understood it – just because a tool is no longer as necessary as it once was doesn’t mean it isn’t useful for lots of people.

And don’t be misled – lots of people do use it. While I was researching StuffIt’s reach in today’s world, Matthew Covington of Smith Micro told me that they served up roughly 2 million downloads of StuffIt Expander in the last year, and sold approximately 90,000 copies of StuffIt Deluxe 2009… on the Mac alone. Include the Windows versions of both, and you can nearly double those numbers.

SmartSend and StuffIt Connect — The goal of compressing files is of course to make them consume less space. But in this day and age of terabyte-sized hard disks selling for under $100, the primary reason to compress files is to speed transfers via the Internet. When you’re dealing with an occasional large file or folder, Mac OS X’s built-in Zip compression and transmitting it as an email attachment will probably work fine.

But if you find yourself regularly needing to send large files to different people, the problem becomes notably more complicated, thanks to the entirely reasonable tendency of email admins to limit the size of incoming attachments, often to about 5 MB, and to reject or simply drop messages containing Zip archive attachments, the vast majority of which are viruses.

StuffIt Deluxe 2010 addresses the latter problem with StuffIt archives that are exceedingly unlikely to be identified as containing viruses by overactive email scanners.

And the former problem? That’s where StuffIt SmartSend comes in. Select a file or folder in the Finder and choose Stuff and Mail from the Magic Menu icon in the menu bar. (Due to the change with contextual menu items and services in Snow Leopard, you can’t currently Control-click items in the Finder as you could in Leopard; Smith Micro tells me this will likely return in an update after they’ve had more time with Snow Leopard.) Following your settings for archive size and preferred email client, StuffIt compresses the file and creates a new message with the archive attached to it. It even includes some text with a link for the recipient to download StuffIt Expander, in case they don’t have it already. 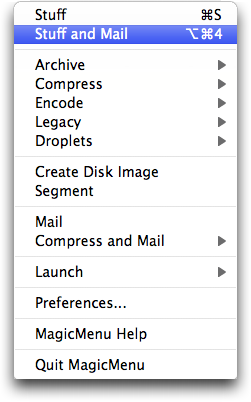 But that won’t help if the attachment is too large for the recipient to receive, and it’s impossible to know without trial and error what size will trigger bounces. 5 MB is generally safe, and that’s the default for StuffIt SmartSend to switch from creating a local attachment of the archive to uploading it to your StuffIt Connect account (which can be created from within Magic Menu’s Preferences window), to your MobileMe iDisk, or to any FTP server on which you have write access.

With StuffIt Connect, you’re presented with a Web interface for specifying the email addresses of your recipients, setting a download access code, specifying an expiration date after which the file will no longer be available, and writing a short message. The access code and expiration date advantages of StuffIt Connect are somewhat weighed down by having to enter email addresses manually, though you can create a contact list on StuffIt Connect for frequent recipients. Smith Micro is looking into providing access to your contacts in Address Book to make address entry easier. 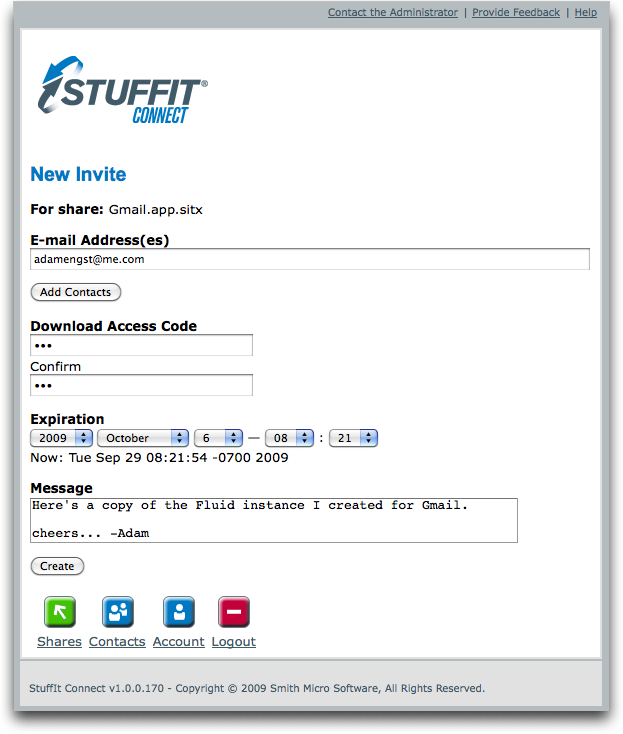 It would be nice if StuffIt Deluxe could present an interface for setting such options directly and then optionally use your email program to create the messages. Although StuffIt Connect can be used via Magic Menu, you can also work with it solely via the Web, making it accessible from an iPhone or iPod touch.

With MobileMe (the file is uploaded to your iDisk’s Public folder) and FTP, StuffIt SmartSend instead does just this, creating a local email message containing a link to download the file, along with a message explaining the download requirement. Unfortunately, the boilerplate message text for none of these services includes the link to StuffIt Expander, which is undoubtedly less well-known by new Mac users than it would have been 10 years ago.

StuffIt Connect is a subscription-based service, but the first year is included for free with StuffIt Deluxe 2010. Subsequent years will cost $49.99, but I wouldn’t be surprised if upgrading StuffIt Deluxe regularly would provide ongoing free access to StuffIt Connect. You can store up to 2 GB of files on StuffIt Connect, and you can transfer up to 4 GB per month (that includes both uploads and downloads). Going over your bandwidth allocation will result in the account being suspended until the first day of the next calendar month. Ideally, Smith Micro would come up with some way you could continue to work in such a situation, perhaps by charging extra, but at least you can switch to MobileMe or FTP if that happens.

Other Features — StuffIt has long been known for handling a huge variety of file formats, so if you want to expand, for instance, an encrypted RAR file or a file compressed in one of 25 other unusual archive formats, StuffIt is almost certainly your best bet. But StuffIt Deluxe 2010 has other new features as well, including: 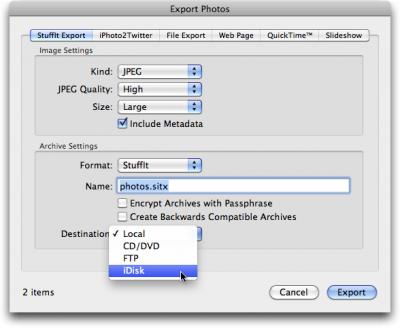 The Rest of the Family — As has been true for many years, StuffIt Deluxe remains the flagship of the StuffIt fleet, and it costs $79.99. However, if you go to the demo download page, there’s currently a $49.99 offer, and Smith Micro is offering StuffIt Deluxe 2010 for TidBITS readers for only $39.99 through 31-Oct-09. (Annoyingly, downloading the demo version requires putting a pending charge on your credit card that must be cancelled.) Upgrades, which require a qualifying serial number from any previous StuffIt product, cost $29.99.

But if you don’t need SmartSend or StuffIt Connect, or the capability to browse archive contents, or integration with the Finder via Magic Menu, StuffIt 2010 gives you the functionality of StuffIt Expander, DropStuff, DropZip, and DropTar in a single program. It costs $49.99, and upgrades from previous versions are $19.99.

And of course, StuffIt Expander 2010, which offers all of StuffIt’s expansion features, remains free to download.