Look at the bottom right corner of any article page on the TidBITS Web site, and you will see a matrix of boxes and dots. That’s a two-dimensional barcode, which combines the past and the future. This computer-readable code acts as glue to connect things we see with actions we want to perform on a computer or mobile device. For instance, you could take a photo of the 2D barcode on one of our articles using a special iPhone app as a way of getting the article’s URL into your iPhone.

A 2D barcode, more appropriately called a 2D “tag” or “code” or even “matrix,” encodes a relatively large amount of information, and is typically used – often by taking a photo – to trigger an online action like displaying a Web site or revealing text. The most popular open formats, QR Code (which we use) and Data Matrix, encode text or a URL in their 2D tags. Anyone can generate codes in these formats without paying royalties. (These formats’ owners have pledged to not levy fees, but reserve their respective intellectual property rights.) 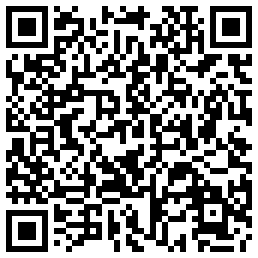 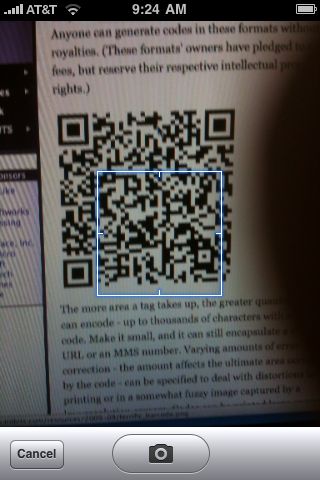 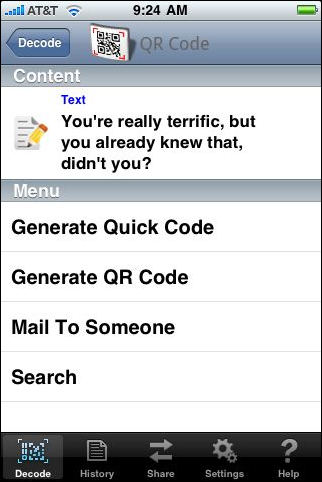 The more area a tag takes up, the greater quantity of text it can encode – up to thousands of characters with a large code. Make it small, and it can still encapsulate a short URL or an MMS number. Varying amounts of error correction – the amount affects the ultimate area occupied by the code – can be specified to deal with distortions in printing or in a somewhat fuzzy image captured by a low-resolution camera. Codes can be printed large or small, too, but not so small that the information content drops beneath a cheap cell camera’s resolution.

Other proprietary formats from Scanbuy, Microsoft (Microsoft Tag), and JagTag encode a number which is looked up in a database operated by the company, then turned into an action, such as loading a Web page or image, adding a calendar item, or sending an MMS to the user. Because only a single number is encoded, these proprietary tags need to represent far fewer bits of information, and can thus use less area and are more resilient to bad photographic conditions.

2D tags are starting to pop up all over – in Sports Illustrated, on the Swiss train system, and on some drink cans – and we want to be part of the action, to see whether it’s a useful addition. While there are multiple ways of getting a URL to a TidBITS article from your Mac to your iPhone, snapping a photo of the 2D tag from one of our articles to open the page on your iPhone seems efficient to me. We’ll see what you think.

Astute readers may recall the CueCat and think, “Isn’t this just the latest incarnation of an embarrassing failure?” But the CueCat was a fixed system, attached to a computer, that was focused primarily on advertising and print publications. CueCat also used 1D bar codes, in which only line thickness conveys information. 2D tags may be used in many more situations, have vastly greater information-carrying capacity, and don’t necessarily require permission of a corporation to create or use.

The CueCat also required a dedicated device to be distributed at relatively high cost to potential users. Just about everyone in the developed world with a cell phone sold in the last five years has a built-in camera.

Let me cut to the chase and start with how you can use 2D tags with the iPhone and other mobile phones, and then provide a little background about its history and future. (You can also read an article I wrote for The Economist that has more business and technical detail.)

Use a 2D Tag — To use our QR Code, you need a phone that can load a software package from one of several companies. All major smartphone platforms, as well as many simpler phones running J2ME (Java) and Brew, have one or more available applications. You need a camera in your phone, too, of course, as well as a data plan to access the Internet.

The camera in the phone needs to be able to focus reasonably well at a tag at close distance so that there are enough pixels in the captured image to analyze the edges of the boxes and lines that make up a tag. The original iPhone and iPhone 3G are quite poor at capturing 1D barcodes, because they cannot focus at short enough range, but they can often recognize 2D codes. The iPhone 3GS is good at both 1D and 2D codes, thanks to its improved camera.

Scanbuy offers software that can read its own code as well as popular open formats. The firm provides detailed instructions or downloads to install its software on dozens of phones and all major smartphone platforms. The software is free.

QuickMark offers a ton of inexpensive tag reading software for many platforms. I purchased the company’s iPhone package, which can read 1D barcodes, such as are found on products and books, and a variety of 2D formats. It’s currently on sale for $0.99 at the App Store. Its regular price is $2.99.

One of the firms that sparked the Japanese revolution described below, 3GVision, and which provides software to most of the currently enabled phones worldwide, just released its own iPhone app, available at no cost. The i-nigma software looks like a bad Windows Mobile port, but recognizes popular 1D and 2D open formats.

You can also create your own 2D tags by hand. QuickMark has a site that lets you create codes in several popular formats, and the QuickMark iPhone software can generate tags from contact information or data you type in. Kaywa, a Swiss consultancy that specializes in 2D tags, also has a QR Code generator. (Kaywa’s various sites are great ways to learn more about and follow developments in 2D tags.)

Microsoft’s nifty colorful entry into 2D tagging can encode information more densely and more beautifully than other formats. The company’s tag can be read only by its software, which is free and available for Windows Mobile, iPhone, BlackBerry, and Symbian S60, as well as Java (J2ME) phones.

Microsoft Tag isn’t widely used yet, but the Redmond giant is offering use of its tags at no cost. The tiny size of Microsoft Tag and the ability to integrate it into a full-color design may make it more appropriate for attaching to products.

The Coming Code Surge? 2D tags became a big deal in Japan in the early 2000s, when mobile companies – eager to push more use of phone-based Internet browsing – worked with handset makers and advertisers to deploy a full system. Phones were shipped with cameras and software that could easily scan such tags, and advertisers made use of the systems in calls to action.

In Japan, a recent study showed about 50 million cell phones users were aware of and had used 2D tags for one or more activities. If you’re reading a newspaper article or magazine, spot information on a billboard or advertisement, or even spot someone with a cool tag on their T-shirt or scarf, you snap a picture and you’re connected to whatever information that represents. One magazine, which appears to be defunct now, was comprised entirely of 2D tags that linked to free stuff, like ringtones and retail product coupons.

A typical use outside of advertising and coupons in Japan is for someone reading an article on a desktop computer who needs to leave mid-article. She snaps the 2D tag, which opens the page on her mobile phone, and then leaves to read the article on the train home. 2D tags can also be used for adding URLs to a mobile bookmark list.

In Europe and the Americas, 2D tag use has lagged because carriers weren’t as interested in pushing mobile Web use in the same way, and no consortia created the ecosystem. Also, phones in Japan were generally smarter earlier than those elsewhere, which has now changed; AT&T told me that they now activate as many smartphones as simpler, “feature” phones.

Scanbuy recently scored a deal in Spain that puts its software in all the major carriers’ handsets. Spanish advertisers committed to use Scanbuy’s codes, which will drive familiarity – especially if you can get a discount on a popular product, like Coke, as a result. Scanbuy also has a deal that puts its software on most phones in Denmark, an emerging relationship with major Mexican carriers, and a partnership with Sprint that’s resulted so far in just one phone with the software preloaded.

Scanbuy’s software can recognize its own format, as well as – at the carriers’ discretion! – open formats like QR Code. Scanbuy also lets individuals register a fairly large number of codes for personal use, and charges only businesses for large-scale usage. (It’s unclear whether carriers will ask to have QR Code and Data Matrix code reading disabled, but it’s up to the carrier. If you install Scanbuy’s software yourself, the open formats can be read.)

Outside of Japan, uses of 2D tags are just starting to pop up, more as an exception or test than in any broad manner. The new collection of xkcd comics sports some 2D tags scattered throughout.

2D tags can be used on the output side, too: you might have seen coupons in 2D format that you can cut out and bring into a store, or that you can bring up on a smartphone’s display and have scanned at a supermarket or other store.

In commercial applications, 2D tags are already widespread around the world. You can see a 2D tag on almost any medical bill, as part of a UPS delivery label, making up USPS metered postage, and in place of or supplementing a 1D EAN product code in retail stores. In closed-loop systems, companies can build end-to-end support for 2D tags.

Worthwhile or Just a Fad? There’s a lot of technology that the Japanese use on a routine basis that those of us in the rest of the world don’t quite understand. But recall how text messaging seemed entirely foreign to Americans until phones made access to the feature easier, and carriers agreed to interchange messages among networks. Once pricing fell into place, texting made as much sense in the United States as it did in Japan and Europe. A trillion text messages will be sent worldwide in 2009; will cell phones scan a trillion 2D tags in 2010?

Comments About Tag, You’re in 2D!