Earlier this year, I looked at the burgeoning field of iPhone photography, or “iPhoneography,” as it is known by some, in “The Art of iPhone Photography” (19 May 2009). One of the photographers I featured in that article, Chase Jarvis, has since released an iPhone photo app and an iPhone photo book, and launched a new iPhone photo sharing site. All three go by the moniker “The Best Camera” and comprise what Jarvis calls a three-part ecosystem devoted to the mantra that “the best camera is the one that’s with you.”

The App — The Best Camera iPhone app costs $2.99. Jarvis provides an in-depth tour of the app on the Best Camera Web site for prospective users. The app’s main draw is that users can easily shoot, edit, and export images without leaving the program. The app also features the capability to view and rate images that have been uploaded to the online community at thebestcamera.com. 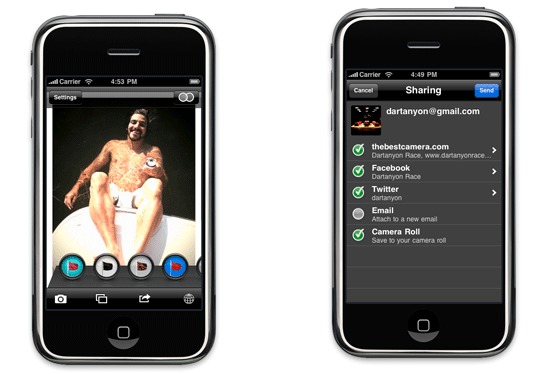 The app currently comes equipped with 14 filters which include, among others: Candy, which raises the contrast and color saturation on your photos; Paris, which brings a “high impact black and white look”; and Slate, which lowers contrast and cools colors to bring an appearance to your photos that’s inspired by architectural drawings.

Sharing features include the capability to send images to Facebook, Twitter, email, the iPhone Camera Roll, or The Best Camera Web site. Simply checking or unchecking boxes next to these various options determines where your images will be sent, and you can even send to multiple sites at once.

The Site — The Best Camera Web site offers a place for users of the iPhone app to upload their photos and browse other uploaded pictures. On the front page, a grid of user photos updates in real time as new pictures are submitted to the site.

In addition to the real-time feed of uploaded snapshots, the site also features a Best Photos page for images that have received thumbs-up votes. Presumably, these votes come from viewers using the iPhone app since there appears to be no voting ability on the site itself. You can view the best pictures of the hour, day, or month, and often find links to the photographers’ personal Web sites via their Best Camera profiles.

The Book — Finally, leaving no stone unturned, Jarvis has also written a book, “The Best Camera” ($19.99). The publisher notes, “The pictures in the book, all taken with Chase’s iPhone, make up a visual notebook – a photographic journal – from the past year of his life. The book is full of visually rich iPhone photos and peppered with inspiring anecdotes.”

While the ebb and flow of the online sharing may be a more dynamic outlet for these photos, the book would certainly make a nice holiday gift for anyone with a interest in iPhoneography. Additionally, the book will in time become be an interesting artifact marking the emergence of the mobile-phone photography field. 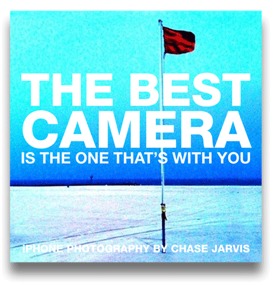