Here I Come to Save the… Wait a Magic Minute — And a great cheer went up from the crowd as the terrible reign of the Mighty Mouse came to an end! If you’ve ever had your Mighty Mouse’s scroll ball clog up on you, you will likely praise Apple’s decision to forgo mechanical scrolling altogether in its new wireless mouse, the Magic Mouse. (The resolution of a trademark dispute over the phrase Mighty Mouse as applied to computer hardware was part of the name change, too.)

Utilizing multi-touch gestures, the same as those available with recent Mac trackpads, you can now scroll in multiple directions just by moving your fingers around on top of the mouse. The touch-sensitive enclosure also lets the mouse become a single or multi-button mouse depending on the location of your fingers.

Apple says the Magic Mouse, which relies on Bluetooth, will be able to work as far as 10 meters away from your computer (a healthy distance for those taking advantage of the new 27-inch iMac’s capability to be mounted on a wall). The mouse is powered by two AA batteries, and includes a power management system that automatically switches over to a low-power mode during periods of inactivity.

The Magic Mouse is included with new iMacs shipping now, and can be purchased separately for $69 later this week. The Magic Mouse requires you to run Mac OS X 10.5.8 or later, and will require a software update – its multi-touch features are not yet available on Macs other than the new iMacs, and the Apple Store notes an as-yet-unreleased Wireless Mouse Software Update 1.0.

Sleekly Remote — Apple has also quietly released a revised Apple Remote, its infrared controller for Mac media playback and other behavior. The new $19 remote is made of aluminum, though it still offers four directional buttons, a menu button, and a play/pause button. 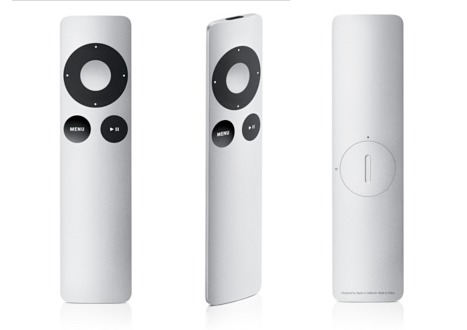 The layout of the buttons has changed slightly, with the play/pause button appearing below the directional buttons instead of within the center.

Base Station Tweaks — The AirPort Extreme and Time Capsule base stations also received subtle but significant upgrades, although Apple provided this detail only in briefings; Macworld tipped us off.

Both base station models apparently sport revised antenna designs that – Apple’s site says – “give you up to 50 percent better Wi-Fi performance and up to 25 percent better range than with the previous-generation AirPort Extreme Base Station.”

Apple has clearly improved the multiple-in, multiple-out (MIMO) antenna system that allows 802.11n routers to perform so much better than the preceding 802.11g wireless networking standard. This is backed up by FCC documents discovered by Engadget.

Apple previously used a 2×2 array, with two receiving and two transmitting antennas. This has been bumped to 3×3, which can keep speeds higher when moving, say, 30 feet or further away from a base station. Instead of dropping to lower rates, the improved sensitivity of the receive antennas and better sending capacity of the transmitting antennas keeps rates higher. This also improves total area covered.

In the future, Apple might jump to a higher overall data rate, where each set of transmit/receive antennas sends a unique data stream. The current base stations can send two streams in 2.4 GHz and two in 5 GHz; future devices will be able to send three, bumping the raw data rate to 450 Mbps from 300 Mbps. For rather detailed technical information, see Glenn’s article at Wi-Fi Networking News.

Apple also tweaked Time Machine backups in Snow Leopard when made to a Time Capsule, claiming on the Time Capsule Web page that performance is 60 percent higher with a new Time Capsule than one released in March 2009.

Time Capsule can be incredibly inefficient when backing up over a network, but it’s surprising that this requires both hardware and software changes. It’s possible Apple increased the processor speed in the Time Capsule; the company rarely reveals the technical specs for its standalone hardware or mobile devices.