Barnes & Noble has officially entered the world of ebook readers with its very own device, the Nook. Featuring a 6-inch E-Ink Vizplex display and a second 3.5-inch touch-sensitive color LCD screen for navigation, the Nook offers a serious alternative to Amazon’s Kindle reader. It can be pre-ordered now, and is expected to ship by late November 2009. 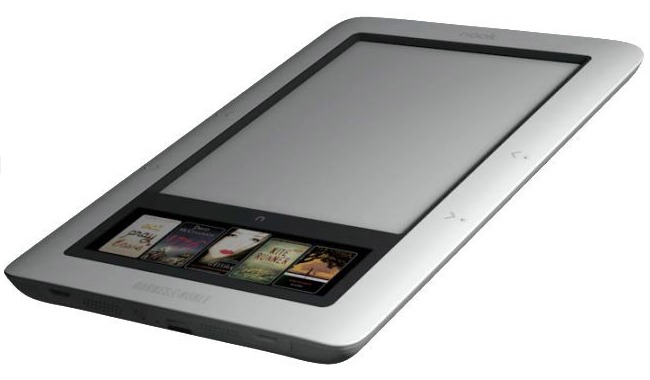 The decision to include two separate displays, each with its own purpose, is an attempt to overcome weaknesses in using the E-Ink display for both reading and navigation. Because E-Ink’s technology refreshes slowly, it’s a frustrating way to move about a book or mark notes, although Amazon did wonders with its second-generation Kindle.

Barnes & Noble includes a 6-inch E-Ink display at the top of the Nook that’s purely for reading. The E-ink screen is nearly identical in size and specifications to the Kindle’s, featuring the same 16 levels of gray and offering adjustable text size.

At the bottom of the Nook, below the E-Ink display, sits a 3.5-inch color LCD screen that’s touch-sensitive for navigation and control of the device. The color screen shows vivid book covers for items in your library. Instead of including a hardware keyboard, as Amazon chose, the Nook provides a software keyboard like the iPhone, which appears as needed for entry.

The Nook includes 2 GB of built-in storage, just like the Kindle, but adds a memory expansion slot using the microSD format. The Nook can read microSD cards up to 16 GB in size.

Interestingly, the Nook is based on Android 1.5, the mobile operating system developed by Google and later the Open Handset Alliance, and used until now only in smartphones.

The Nook features two basic kinds of connectivity: wireless and USB, just like the Kindle. As with the Kindle, purchases on the Nook are limited to the wireless side, while personal content (such as PDFs, MP3s, and screen saver images) must be transferred via USB.

Unlike Amazon’s devices, however, Barnes & Noble includes both 3G cellular network connectivity – the price of access bundled into the cost of purchases – and 802.11g Wi-Fi. The 3G service relies on AT&T’s network, but AT&T’s data standard is the dominant one used worldwide, hinting at future deals. Amazon recently released an international version of its Kindle, identical to previous models save for using AT&T’s network instead of Sprint’s. (See “Amazon Extends Kindle Beyond United States,” 8 October 2009.)

Details are scanty on how the Wi-Fi connection can be configured; there’s no built-in browser, as on the domestic Kindle (even though Amazon labels that one “experimental”), making it impossible to log into networks that require any Web-based data entry or button clicking. The device likely connects via a settings screen to entirely open networks or those needing a simple WEP or WPA/WPA2 Personal password, but that can’t be confirmed yet.

Barnes & Noble said that the Wi-Fi service will connect automatically in its brick-and-mortar stores, where it offers free Wi-Fi to all comers. As a bonus, when you use a Barnes & Noble Wi-Fi network, you can read, at no cost, one entire book from the company’s library during a visit.

A common critique of the Kindle is its inability to read certain open formats, including EPUB files. EPUB is an industry standard that can be protected by encryption for digital rights management (controlling what you read and where), or used in an open format that can be freely transferred among devices. The standard Kindle also lacks support for PDF files; the larger Kindle DX has PDF support, but doesn’t honor bookmarks or links. PDFs and open EPUB files can be converted – poorly – for direct transfer to a Kindle.

The Nook can read EPUB and PDF files without conversion, along with the eReader format, which is the native format Barnes & Noble chose for ebooks that it sells directly. The Nook can also play back MP3s through a built-in monaural speaker or a stereo headphone jack.

The tech specs page for the Nook is a little confusing on which book formats may be downloaded wirelessly and which require a USB connection. The site implies that EPUB and eReader files don’t require a USB connection, which would further imply that one might be able to buy or download free books from sources other than the Barnes & Noble library using the 3G or Wi-Fi connection. PDFs, image files (JPEG, GIF, PNG, and BMP formats), and MP3 files must be copied via USB. (Images can be used as custom screen savers.)

Barnes & Noble also decided to peck at another perceived Kindle weakness: Amazon’s reader has a built-in battery that can’t be swapped by a user; the Nook has a replaceable battery, potentially useful for extended trips without access to power, or after an older battery has worn down.

Barnes & Noble already sells electronic books, which can be read using desktop software for Windows and Mac OS X, as well as mobile software for the iPhone, iPod touch, and certain BlackBerry and Windows Mobile models and releases. As with the current store, many books (how many isn’t stated) can be loaned out to someone with a Nook or any reader software for up to 14 days, during which time the book is unavailable to the original purchaser.