On 22 October 2009, Microsoft opened their very first consumer retail store, in the Scottsdale Fashion Square mall in Scottsdale, Arizona. Although Microsoft has long had a fabled company store at the Redmond, Washington campus, the Microsoft Store is their first attempt at engaging directly with consumers in a Microsoft-controlled retail environment, and obviously an attempt to compete directly with Apple’s highly successful stores.

Since the new store is only 20 minutes from my home in Phoenix, I decided I couldn’t miss the opportunity to attend the opening of the first Microsoft Store. Since Scottsdale isn’t exactly a geek-haven like San Francisco or New York, I arrived right at the 10 AM opening.

Boy, was I in for a surprise. I found a long line snaking through the interior in the mall, full of many of the same sorts of people I encounter in my annual sojourns to the iPhone upgrade line at the Apple Store located 10 minutes away. Judging by the number of iPhones in line, it was likely some of the same individuals.

I didn’t know what to expect, but I ended up weaving through the line for about an hour before I finally found myself within sight of the store itself.

I was immediately struck by how similar the design is to the Apple Store. The outside consists of a big glass storefront, with a simple Microsoft logo over the doors. Technically it’s the four-color Windows logo (enhanced with a bit of a gradient), and not the main text-based Microsoft logo. Like the Apple Store, there are no words on the exterior itself. 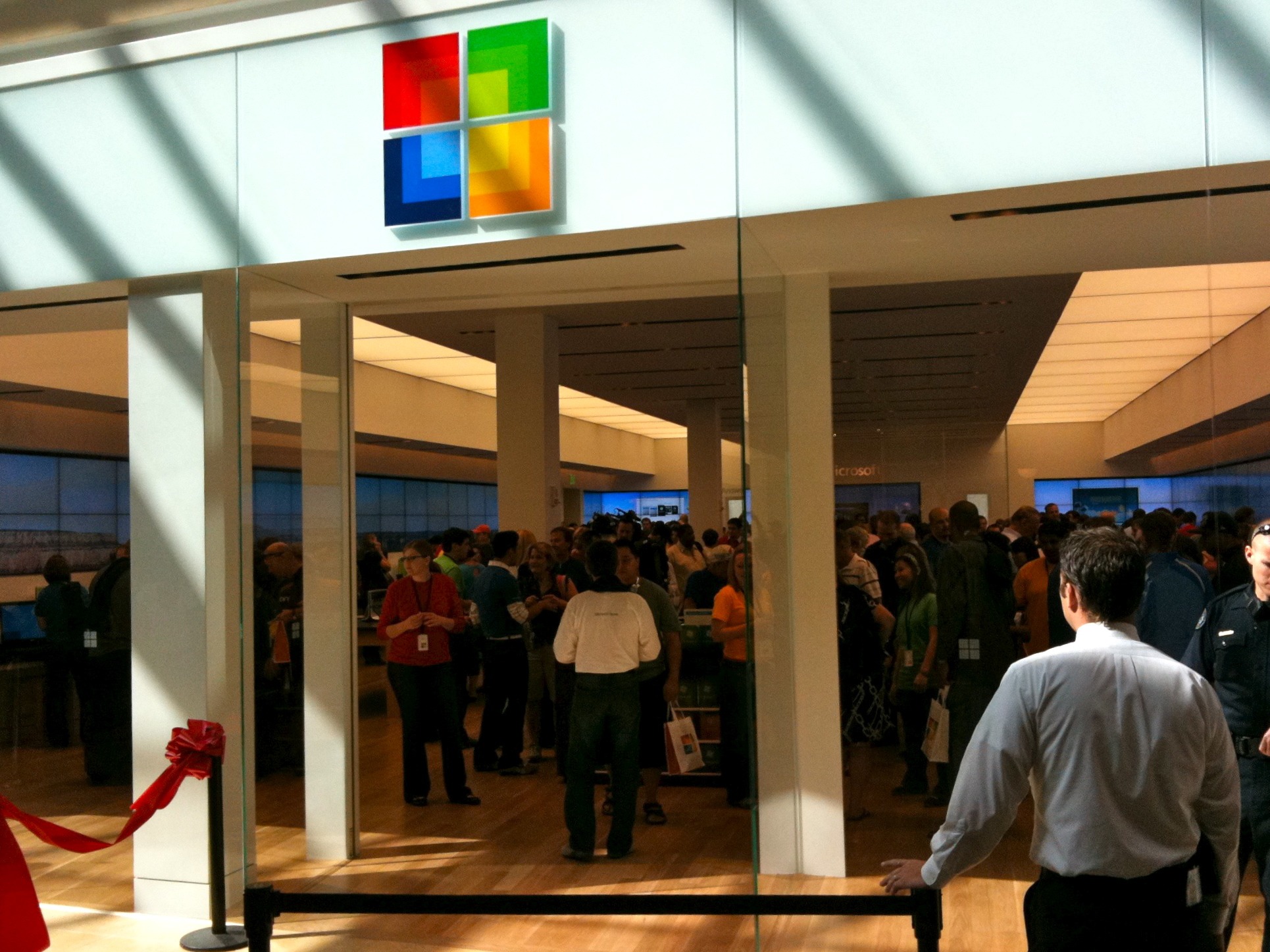 The similarities only increased as I walked through the doors. From the “high fives” from the cheering employees, to the physical layout, it’s clear the Microsoft Store is a highly deliberate attempt to mimic the Apple Store experience. The product display tables, positioning of products around the periphery of the store, location of the support and training areas, the employee dress code (simple t-shirts), and nearly every other design element are right out of the Apple Store.

Most products are laid out cleanly on either large tables in a grid pattern on the floor, or around the edges. Products are grouped by type (different categories of laptops or desktops), with peripherals attached, including plenty of Zune audio and video players. Centered in the back is a support area that is nearly identical to a Genius Bar, behind which is a training area with benches. Purchases are made on the floor, with employees using handheld credit card readers. The entire staff is helpful, informed, and friendly, unlike most of the big box retailers that sell Microsoft hardware and software.

I can’t express how closely the design follows Apple’s lead. The colors, positioning, lighting, and nearly every other aspect matches what Apple has done. If the Microsoft Store fails, Apple could easily buy the location, swap out the products and a few logos, and be up and running in a couple of days.

But I have to admit the Microsoft Store also includes some nice design enhancements. There is a continuous line of large LCD displays on the walls above the products, right where Apple normally places their latest product posters. The displays show a wrap-around outdoor water scene that looks like it might be from the Seattle area. Hand-drawn (at least they look that way) text and images gently fade and float in and out over the product areas they describe, with a few photographic images and videos mixed in.

In the back corner is a section for the Xbox 360, with game stations set up facing the walls where people can try out the latest games. In a cute touch, the games play in the middle of the wrap-around display with a hand-drawn frame of a television around them. The station with the Guitar Hero instruments included headphones so you could play the game despite the noise around you.

The coolest part of the store is the four Microsoft Surface tables mixed in with the product displays. Surface is a multitouch tabletop running a special version of Microsoft Windows designed to let multiple people interact around the display. On one table, people were playing chess, on another they were flying around a version of Virtual Earth, while another had interactive product information. It’s hard to describe Surface in words, but it’s one of the better ambassadors for Microsoft’s technologies.

It’s also clear that Microsoft is using the store as an opportunity to change how people connect with their products. The theme from the employees (and the PR representative I talked with) is “Choice, Value, Service.” The PCs on display were some of the nicest models I’ve seen on the market, even the smaller netbooks. All computers in the store come with support and Microsoft Signature, a free service that removes all the “free” antivirus and other PC manufacturer software that cruds up a new PC, and gives customers a pristine installation of Windows 7.

Microsoft is using the store – and others slated to open – as a way to connect directly with their customers, most of whom purchase and interact with Microsoft products through third parties, especially big box retailers and low-cost online outlets. By providing clean systems, in-person support, and knowledgeable (and helpful) sales associates, Microsoft is providing an extremely different experience than most PC users are familiar with.

Still, I can’t help but be disturbed in exactly how much the Microsoft Store blatantly replicates the Apple Store experience. The improved service and support are excellent, as is the use of interactive displays, but copying even the physical layout and colors of an Apple Store is disappointing. Rather than creating a distinct, innovative experience, it feels like a Microsoft-branded Apple Store.

Although the Mac and iPhone are my primary computing and communication devices, I do also use and enjoy many Microsoft products, including Windows (on my Macs). While I’ve switched more than a few friends and family to Macs, there are still many on PCs. From now on I will enthusiastically recommend the Microsoft Store as their best choice when looking for PCs or to test out the latest Microsoft software, and it will be my first stop when I finally convince my wife to let me get an Xbox 360.