A little company up the street from this reporter has released the seventh version of its operating system, taking nearly 25 years to get to this point. You may have heard of them. Microsoft.

Windows 7 ships with huge expectations for the company, which stumbled badly with its previous release, Windows Vista, thanks to a poor upgrade path for Windows XP users and overly optimistic system CPU and memory requirements. While Vista eventually straightened itself out for the most part, the bad taste remains.

Windows 7 is generally receiving great reviews, although many reporters have reminded us that the same people praising Windows 7 also said Vista was the best release of Windows ever – Harry McCracken rounded up all the major Vista reviews at his Technologizer site. Still, the buzz among beta testers and early users of Windows 7 is quite positive about security, usability, reliability, and simplicity. That’s not a bad thing, of course.

But the true upgrade path for hundreds of millions of computers isn’t from Vista. It’s from XP to 7, whether it’s taking a machine that has at least the minimum specifications and installing new software, or buying a new machine and transferring data.

For an upgrade on the same computer from XP to 7, Microsoft requires that you back up your data in XP, wipe the drive, perform a clean Windows 7 installation, and then restore your data. Programs must be reinstalled from original downloads or discs, too. (Even Vista users have to perform a clean install if they aren’t moving from the same edition of Vista to Windows 7, or are downgrading from, say, Vista Business to Vista Home Premium. You can upgrade from XP to Vista and then Vista to 7, but that sounds like asking for oceans of trouble.)

Some might quibble, saying, “XP is an 8-year-old operating system, and you can’t simply upgrade from Mac OS X 10.1 to 10.6, so aren’t you being specious here?” No. First, XP is for sale on many current netbooks, and can still be purchased as a preinstalled downgrade option from major computer makers. That is, you buy the computer with Vista, and as a courtesy, the machine is shipped with XP installed and a set of Vista upgrade discs! (That’s how Microsoft counts so many Vista sales, while the installed base is so much lower.) In contrast, Apple hasn’t sold Mac OS X 10.1 since 2002.

Second, on any Intel-based Mac, regardless of the operating system version it’s running, you can perform an in-place upgrade to Snow Leopard, although that goes back only as far as Mac OS X 10.4 (the first OS that Intel-based Macs run).

Beyond the in-place upgrade issue, Windows 7 doesn’t include basic productivity and media-handling programs for tasks like email and photo management, apparently in part to address concerns of software bundling and antitrust raised largely outside the United States. You can download those programs separately at no cost, and Dell and some other computer makers will preinstall them, too.

Windows 7’s upgrade matrix is still the nightmare of its previous releases, with three purchasable versions (Home Premium, Professional, and Ultimate) that have minor differences, plus a starter version that equipment makers can offer (Home Basic). Microsoft must have MBAs that have figured out this is the best way for it to make the most money, but it’s been unclear to everyone else why there’s not just a home and business edition – if even that’s needed. Apple gets away with a single version of Mac OS X for end users, but it also doesn’t need to make money from selling different versions as upgrades to hardware makers. 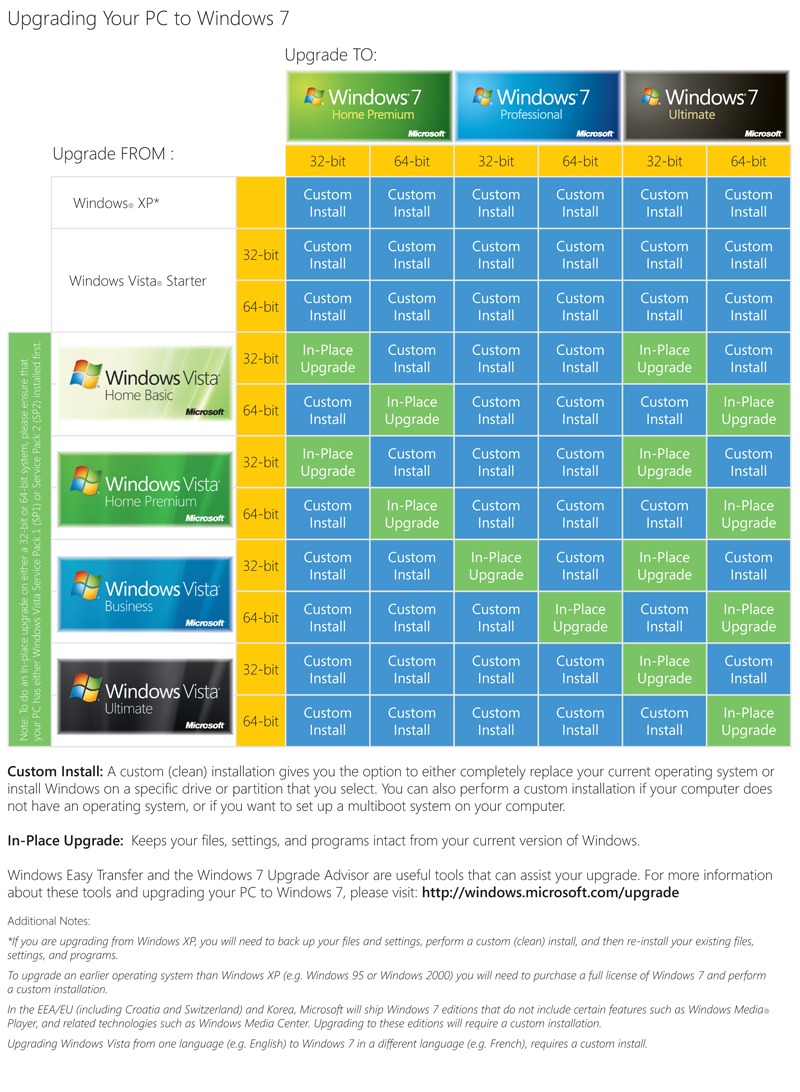 Although Microsoft has offered 64-bit versions of Windows for years, switching between 32-bit and 64-bit versions on the same computer requires a clean installation. Mac OS X 10.6 Snow Leopard’s 64-bit flavor isn’t quite there yet for consumer users in terms of utility, but holding down the 3 and 2 keys or 6 and 4 keys at startup is the only “reinstall” one needs to swap modes.

Apple plans to make great hay about the XP upgrade process, wondering why people don’t just move to Mac OS X instead if they have to wipe their machine, restore data, and likely update their software to new versions. Since most people at home spend most of their time using email, the Web, and some media-handling programs, the big gap is importing bookmarks, media, and email from XP to Mac OS X, something Apple should be facilitating for switchers.

I have long wondered why Microsoft didn’t cast off the past more fully and simply rely on emulation for backwards compatibility, much like Mac OS X’s early Classic mode for Mac OS 9 support (see “Microsoft Needs to Empty Windows Trash, Reboot,” 29 June 2008). And Microsoft has done that with Windows 7, sort of. There’s an optional XP mode for more expensive editions, but it still requires new installations within that mode of older software. It can’t simply take an XP image and boot from it.

That’s apparently possible with at least VMware Fusion under Mac OS X, although I haven’t attempted it. One could buy a new Mac mini ($599 plus some additional RAM), copy over an XP drive, manage it under Fusion, and still run older programs (likely faster than on the XP system if it’s a few years old) while gradually migrating to Mac OS X.

Of course, untold millions will simply buy new computers, having endured XP while waiting for Vista to pass, and get Windows 7 as part of that new computer without any of the upgrade pain – although they will still have to transfer data and applications over, and can use the same extraction tool available for upgrades that’s included in Windows 7. There’s likely a fair amount of consumer and business pent-up demand. Windows 7 is $120 to $220 depending on whether you get an upgrade or full version and which edition you choose; a new Dell tower with Windows 7 Home Premium starts at $400.

Windows 7 apparently runs faster and better with far fewer unnecessary security warnings. And it improves on the Windows Vista security model, which has several elements that are far superior to Apple’s security technologies in Leopard and Snow Leopard. So it’s got that going for it.

No one would propose that the release of Windows 7 will unleash a massive move to Mac OS X. (No one even laughingly suggests a big move to Linux on the desktop any more, even as usage there slowly increases.) Rather, Microsoft has very likely released its best operating system to date, a worthy competitor to others in the field, but it’s simply not very important.