iPhoto2Twitter 1.6.1 — Blue Crowbar Software has released a minor update to iPhoto2Twitter, the iPhoto plug-in that lets you share your pictures via Twitter in either iPhoto ’08 or iPhoto ’09. The update improves compatibility with the online sharing service Mobypicture by supporting its new URL length, which is nine characters shorter than the old one – thus extending your tweeting capability by nine characters. (€4.95 new, free update, 566 KB)

Other changes include integration with Google Maps that enables you to print a map on your card specifying your business location, 2D barcode support that lets you encode additional details and information on your card, and improved photo capabilities such as support for iPhoto Events and easier access to your Aperture library. A full list of changes is available on BeLight Software’s Web site. ($34.95 new, $19.95 upgrade, free update for version 4 users who purchased after 1 August 2009, 55.9 MB)

SpamSieve 2.7.7 — C-Command Software has released a maintenance update to its powerful Bayesian spam filtering software, SpamSieve. Changes include improved compatibility with pre-release versions of Mac OS X, enhanced filtering accuracy, modernized program code, an updated version of the Vietnamese localization, and an updated version of the Apple Mail script for discarding spam. Also, a bug that prevented the Apple Mail command Train as Good from moving Exchange messages back to the Inbox has been fixed, and encoded HTML mail is no longer recognized as spam in the default settings. ($30 new, free update, 3.9 MB)

CrashPlan+ ($59.99) customers can now adjust the frequency and version retention settings even further with sliders under the Settings > Backup > Backup Frequency and Versioning Settings, deciding the precise backup frequency and deletion of outdated backups. 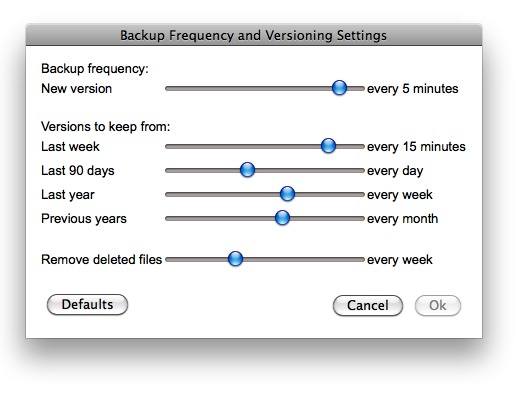 The update extends bundle support for Banner Projects (.bnz), Sandvox documents (.svxSite) or files created with OmniGraffle (.graffle). Finally, several bugs have been addressed, including one that prevented the root designation “/” from being interpreted properly, one that prevented deleted files embedded in folders from being properly detected in real-time, and one that prevented files from a local folder from being restored if the recovery was attempted outside the time period CrashPlan was specified to run.

For current CrashPlan users, CrashPlan 10.19.2009 will be automatically downloaded and installed by the program; no additional steps are necessary. CrashPlan is free; CrashPlan+ costs $59.99. Access to the CrashPlan Central backup service costs $54 per year for individuals or $100 per year for a family.