Apple has announced that the App Store now has over 100,000 titles available, making it the largest application store in the world.

In verifying that claim, I checked into the app stores of the iPhone’s main competitors: Android-based smartphones from various sources, RIM’s BlackBerry, Nokia’s smartphones, and the Palm Pre and Pixi. Here’s how they compare:

Clearly, Apple’s App Store is far and away the largest, at roughly 8 times the size of the Android Marketplace and vastly larger than the rest.

It’s difficult to determine exact numbers for Nokia’s Ovi Store, since it groups apps by which mobile phone they support, and no model I checked had more than 750 apps and 450 games available. However, in its “Any Phone” category, there were 1,384 apps and 1,232 games – clearly there are some compatibility issues that prevent any given phone from accessing all available apps.

Of course, size isn’t everything. The real test of Apple’s model for the iPhone and the App Store will come once these other app stores are fully mature and developers can determine which platforms provide the most return on investment. Apple may have 100,000 apps in the App Store and can boast of well over 2 billion downloads, but many of those apps are hardly ever downloaded, and of those that are, only about 1 percent garner a long-term audience, according to Pinch Media’s statistics.

Will these other platforms offer a higher return on investment to developers? Right now, the App Store is suffering in that department. Alan Oppenheimer of Open Door Networks, co-developer of the shockingly popular Envi Web-image slideshow apps, told me, “The App Store is sort of like the traffic paradox: the roads are so crowded that no one wants to drive on them.”

Apple may crow about the App Store’s size, but size is also the App Store’s greatest challenge. It can be nearly impossible to find apps within the App Store, and although Apple has put some effort into the problem, organization and discoverability haven’t improved all that much since the App Store’s launch.

Even now, for instance, searching for “race timer” in the App Store app on the iPhone returns just two hits, whereas the same phrase used via iTunes on the Mac returns 22 hits, including an app called “RaceTimer” that didn’t show up in the iPhone app’s results. Or, for more giggles, just try searching for apps using the word “dog” in iTunes and see how many hits you get (roughly 800). Then compare to a search on “dogs” (maybe 150 or so).

Categorization remains troublesome, and, if anything, has become even more obscure with iTunes 9 and the new iTunes Store interface, which seemingly tries to hide what little organization the App Store has. The trick is to hover over the App Store “button” at the top of the iTunes Store window; a downward-pointing triangle appears, indicating that the button is actually a menu, and clicking it reveals the 20 different categories. Of those categories, only Games offers sub-categories (19 of them, including Action, Adventure, Arcade, Board, etc.). But you’d think that the Travel category, which contains over 7,000 apps, could be broken up more as well. 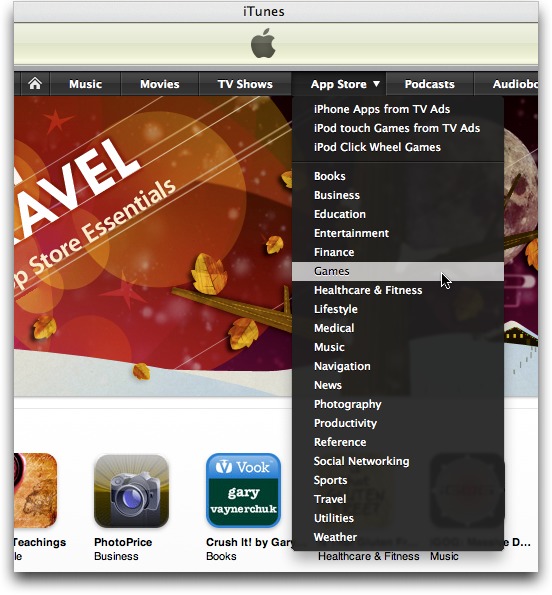 Apple does ask developers for keywords describing their apps, but exactly how that information is used remains unclear and highly controversial. Some developers even report having downloads of their apps drop precipitously after entering keywords, and I’ve heard that Apple may be changing how the App Store’s search engine uses keywords on a regular basis, making it difficult to come up with functional strategies.

Regardless of how Apple uses keywords now, they’re clearly not exposing this to users in a helpful fashion. I could imagine a progressively navigable tag cloud, where clicking one tag (dog) would display another tag cloud built from tags held in common by the apps sharing the selected tag (training, pictures, whistle, health), and so on. That particular suggestion may prove cumbersome, but it’s not like the App Store is anything but cumbersome now, and Apple would do well to start exposing whatever additional metadata it has to users.

Honestly, I don’t see Apple letting the App Store collapse under its own weight, but with all these other app stores coming online and gaining momentum, Apple needs to solve these problems sooner rather than later.