I dislike turning comparisons between Windows and Mac OS X into a battle of Rock’em Sock’em Robots. But Apple’s neglect of a feature it invented, and Microsoft’s picking up the baton, makes it worth pointing out how the Redmond operating system maker got it right – and what Apple needs to do for its own users.

Apple was the first OS maker to make it possible to turn a computer into what looks to other devices like a hardware base station – technically, an infrastructure mode Wi-Fi access point. An infrastructure access point is the hub to which Wi-Fi clients connect. The access point is typically connected with a router that’s hooked into a wired network or a broadband connection. (A base station or gateway is a few animals in one box.)

A software base station lets you avoid having to purchase hardware in cases where a computer can connect to broadband and share it; and it gives you a mobile base station for workgroups that don’t need the Internet, or to share a 3G network feed.

Apple introduced this feature in Mac OS 8, but it was then absent from Mac OS X 10.0 and 10.1. When it reappeared in 10.2 Jaguar, it seemed to be just a port of the code and interface. Apple essentially stopped real development with Jaguar, adding only minor fixes since then. 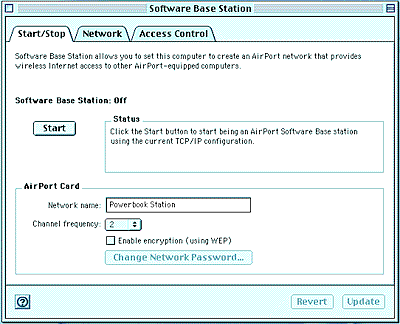 In Mac OS X 10.5 Leopard or 10.6 Snow Leopard, if your computer has a Wi-Fi adapter, open up the Sharing preference pane, and click the Internet Sharing tab; then click the AirPort Options button. The dialog that appears is nearly identical to its pre-OS X predecessor. You can choose the key length of the weak WEP encryption type (40 or 128 bits), but it’s otherwise about the same thing. Channel selection is only 1 through 11 (in the United States) in the 2.4 GHz band. 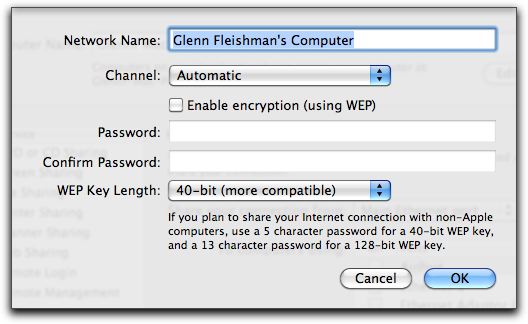 Why care about these limits? Because Wi-Fi has moved on, and the software base station software is still stuck in 1999. WEP (Wired Equivalent Privacy) encryption has been broken for years, crackable with simple software in 1 to 15 minutes. You can’t rely on it except as “no trespassing” sign, enforceable by law in some U.S. states and other countries where breaking a WEP key would constitute a computer crime. Don’t expect WEP to protect your data or deter connection thieves.

The robust WPA2 (Wi-Fi Protected Access) method has been built into Apple’s hardware since 2003, and Macs capable of running 10.3 Panther could upgrade AirPort Cards to connect to WPA networks. (AirPort Extreme Cards are needed to connect to WPA2 networks, which use a more advanced encryption method.)

Further, since 2006, Apple has been shipping Macs that have support for two different frequency bands: 2.4 GHz, the original one used for Wi-Fi, but which is crowded with Wi-Fi and other uses; and 5 GHz, a lesser-used band that has much more frequency available, too.

Apple allows its 802.11n base stations to be set to use one of eight nonoverlapping 5 GHz channels; the nonoverlapping part means that all channels can be in use by different networks in the same proximity at once. The 2.4 GHz band has just three nonoverlapping channels, which compete with Bluetooth, cordless phones, baby monitors, microwave ovens, and other purposes. 5 GHz also allows the use of wide (40 MHz) channels, double what’s made available in 2.4 GHz, and thus capable of up to double the speed.

Windows systems prior to Windows 7 use ad hoc networking to create a computer-to-computer connection. In Mac OS X, you create an ad hoc network by choosing Create Network from the AirPort menu. An ad hoc network has nearly the same available settings as a software base station, but each computer on an ad hoc network listens to all the other computers rather than to a central computer acting as the hub. It’s quite inefficient, and isn’t standardized, so you can’t use ad hoc reliably among different operating systems, or sometimes different adapters. Ad hoc networking can’t be secured with WPA or WPA2, either. 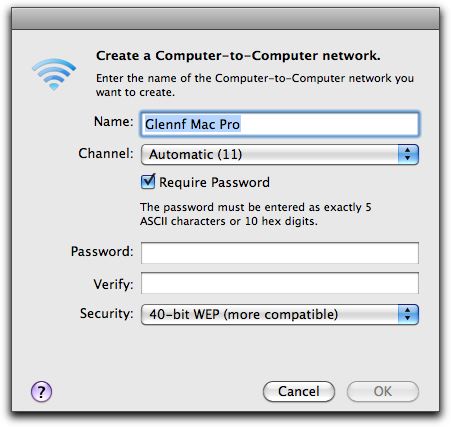 For Windows 7, Microsoft rolled in something from Microsoft Research: a virtual wireless adapter. The way this works is that with a single Wi-Fi module in a computer, Windows 7 can create two separate connections at the same time: one can act like a regular Wi-Fi connection to a base station, if an infrastructure network is available; the other acts like a software base station with full security and channel selection options.

With a dual connection, you can share a network by creating your own network. That has some security considerations inside companies that only want authorized Wi-Fi networks in place, but there are a lot of advantages for sharing one-to-many at places like hotels. The only limit on the two-connection method is that the software base station has to run on the same channel as the connection to the “real” Wi-Fi network.

Why did I say “almost” at the start of this article about Microsoft beating Apple to the punch? Because although Microsoft left the hooks in place in the shipping version of Windows 7, there’s no interface to enable the virtual Wi-Fi adapter. Nomadio has released a beta test of Connectify, software that uses the Windows 7 hooks to turn the feature on and offer up controls.

Apple is now behind the times, offering outdated and insecure software base station functionality, with a distinct lack of channel selection. Tell the company you want better!