Viewfinder 1.0 — Do you find looking for images for use in presentations or publications a frustrating experience? To address that, Connected Flow has released the first version of its Flickr search utility Viewfinder. The software enables you to search the Flickr archives by keyword, and then filter the results by image size and license type (to facilitate finding images that can you can use legally). Found images can be viewed with Quick Look, downloaded, set as the Desktop image, or sent directly to Keynote ’08 and later. Viewfinder 1.0 requires Mac OS X 10.6 or later. (€15 introductory price, €19 regularly, 1.7 MB) 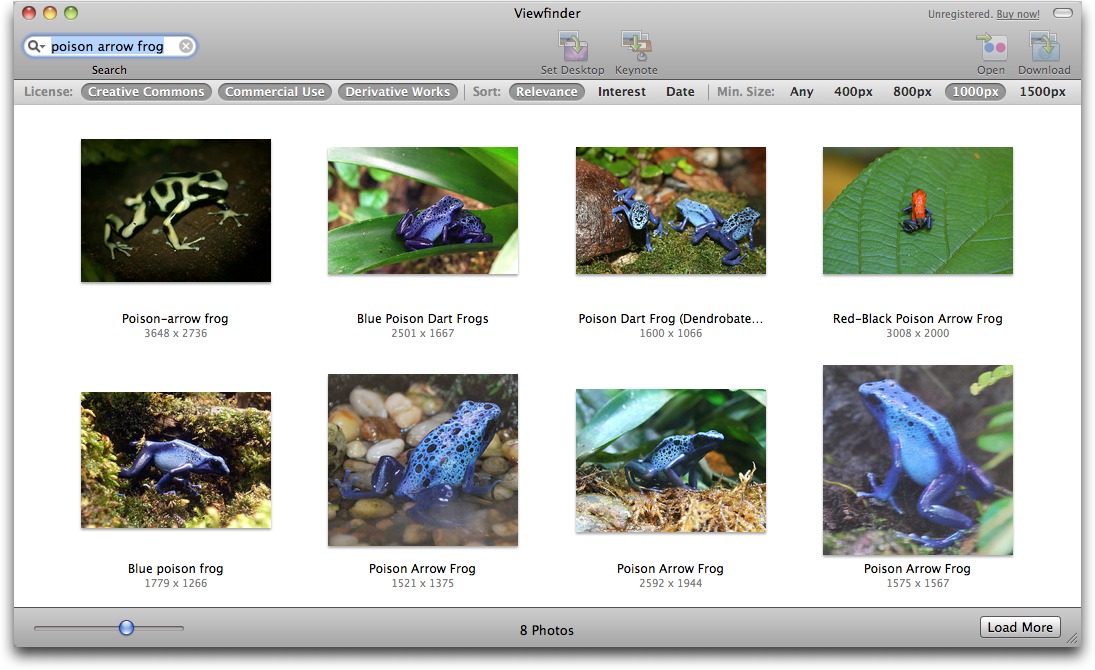 MacSpeech Dictate 1.5.6 — MacSpeech has released a maintenance update for the speech recognition utility MacSpeech Dictate. The latest version adds a Dictation Preferences pane that lets users enable or disable the Auto Cache Document feature for TextEdit and Microsoft Word. Other changes in recent updates include a contextual menu for the Available Commands window, proper display of Selection Commands in the Status window under the Recognized Text area, and disabling of Email Commands if Address Book contains more than about 900 entries to avoid resource issues. Also, menu mapping is now compatible with the latest versions of applications bundled with Snow Leopard,
an issue that caused documents to crash when caching or closing has been fixed, and a bug that caused crashes when editing with a mouse has been addressed. Full release notes are available on MacSpeech’s Web site. ($199 new, free update for purchases since 1 April 2009, $54.95 upgrade for earlier versions)

BBEdit 9.3 — Bare Bones Software has released a significant update to the powerful text editor BBEdit. The latest version adds the capability to include saved Finder searches in Projects, improves support for non-text files in Projects, enables users to use Quick Look to preview files in Projects and disk browsers, and enables users to set language-specific tag files to store common completions. Also, a new utility, called bbfind, has been added to provide command-line access to BBEdit’s multi-file searching feature. Finally, the Clippings feature has been enhanced to provide easier access in mixed-language files, a New button that enables new folders
and files to be created directly in the browser has been added to the FTP/SFTP browser, and various bugs have been fixed. Full release notes are available on the Bare Bones Web Site. ($125 new, free update, 16.1 MB)

Sandvox 1.6.5 — Karelia Software has released a maintenance update to Sandvox, their template-based Web site creation tool. The latest version improves support for uploading to certain SFTP and WebDAV servers, and improves Snow Leopard compatibility for the iMedia Browser component. In addition to the update, Karelia Software is offering a promotion until the end of November wherein Mac users get a free license to Sandvox Pro by purchasing a year’s worth of Web hosting from either A2 Hosting or Server Logistics. ($57 Regular/$97 Pro, free update, 26.8 MB)

Kaspersky Anti-Virus For Mac 1.0 — Internet security company Kaspersky has unveiled its first product targeted at Mac users, Kaspersky Anti-Virus for Mac. The software is mainly aimed at preventing Mac users from unknowingly acquiring Windows-specific viruses and then passing them on to Windows-using contacts whose machines could be affected. Features include real-time download and attachment scanning, minimal CPU usage, automatic updating, and the inclusion of the latest Kaspersky antivirus technology. Although we do find a new entrant in the Macintosh antivirus world interesting, we don’t recommend antivirus software for most Mac users
(see “Should Mac Users Run Antivirus Software?,” 18 March 2008). ($59.95 new, 49.4 MB)

DiscLabel 6.1 — SmileOnMyMac has released a maintenance update to the CD and DVD label design software. Changes in DiscLabel 6.1 include support for Flickr accounts, the capability to delete items by dragging them into the gray area outside the design element, and cut marks that remain visible beyond the first cut when working with Plain Paper output. Also, layer tab sizing has been improved when working with many layers, it is now easier to show or hide layers, a keyboard shortcut has been added for bringing up the Inspector palette, and various unspecified bugs have been fixed. ($35.95 new, free update, 23.2 MB)

BusyCal 1.0.3 — BusyMac has released a maintenance update to the iCal-inspired desktop calendar with built-in sharing capabilities, BusyCal. The latest version adds the capability to attach alarms to events on the Birthday calendar; text in read-only fields can now be selected and copied; and the Dock icon now displays the current date. Also, a number of bugs have been fixed, including one related to the Alarm menu, one related to Daylight Saving Time, and several crashing bugs that occurred when hitting Undo, fixing duplicate entries, and editing Sticky Notes. A full list of changes is available on
BusyMac’s Web site. ($40 new, free update, $10 upgrade for BusySync users, 4.5 MB)

Parallels Desktop 5 — Hot on the heels of VMware’s release of Fusion 3 (see “VMware Fusion 3,” 28 October 2009) comes a new version of Parallels Desktop for Mac. Parallels 5 fully supports Windows 7, and is reportedly up to 300 percent faster than the previous version of Parallels (with even greater gains in 3D graphics performance). It now lets you run 64-bit versions of Windows and Snow Leopard Server as guest operating systems, and lets you assign up to eight virtual cores to virtual machines. Compatibility and performance gains are among over 70 new features, including a MacLook Theme, which gives Windows windows the appearance of Mac windows; Crystal Mode, which extends Coherence view by eliminating the Parallels menus and putting the Windows Start menu in the Mac OS X menu bar; support for the Apple Remote and gestures on multi-touch trackpads; improved copy-and-paste and drag-and-drop features; and expanded support for multiple displays. A free trial version is available, and Parallels now offers a $49.99 competitive upgrade price to owners of VMware Fusion. ($79.99 new, $49.99 upgrade, 219 MB)

TweetDeck 0.31.3 — Iain Dodsworth has released the latest version of his Adobe AIR-based Twitter client, TweetDeck. Changes include a revised notification system with a new pop-up preview window, support for keyboard shortcuts, an added Followers column, and the capability to set notification preferences per column. Also, several bugs have been fixed, including one that caused the spell checker to be unavailable for some users, one that prevented certain URLs from being automatically shortened, and one that prevented entering messages longer than 140 characters (messages must then be edited to no more than 140 characters). A full list of changes is available on Dodsworth’s Web site. (Free, 2 MB)