I’m a huge proponent of secondary displays to increase productivity – the more you can see, the easier it is to move from task to task and to complete tasks that require referencing one resource while working in another application. But laptops and ebook reading devices have historically had trouble providing particularly large screens; after all, the larger the screen, the less portable the device.

One way to increase screen real estate without relying on a single large display is to build in a second display, something that a number of companies have been trying to do recently, with varying levels of success. Honestly, I can’t see Apple adopting any of these approaches without some significant improvements in the industrial design and overall user experience, but the ideas are interesting nonetheless.

Here’s a roundup of eight dual-display devices that I found – let me know in the comments if you’ve seen others. It’s worth noting that all of these are real, at least in terms of being a prototype, unlike purely graphical concepts like Mac|Life’s triBook, which imagines two hinged outrigger screens on either side of the main display.

Integrated Secondary Display — I’ve actually seen Lenovo’s ThinkPad W700ds in person, and let me tell you, it’s a beast. The ThinkPad W700ds features a large 17-inch main display, and a vertically oriented 10.6-inch secondary display that optionally slides out from the right side of the 17-inch display. The rest of the machine’s specs are equally over the top, with an option for a Core 2 Quad Core Q9100 processor, 64 GB solid-state drive, built-in webcam, two hard disks in a RAID configuration, WiMAX networking, and even
a Wacom onboard palm rest digitizer. It’s not light, needless to say, weighing in at 10.9 pounds (4.96 kg). Frankly, this workhorse computer is big, ugly, and expensive ($3,133 list price), and it barely counts as a laptop. But it does have two screens and can be purchased today, unlike anything else here. 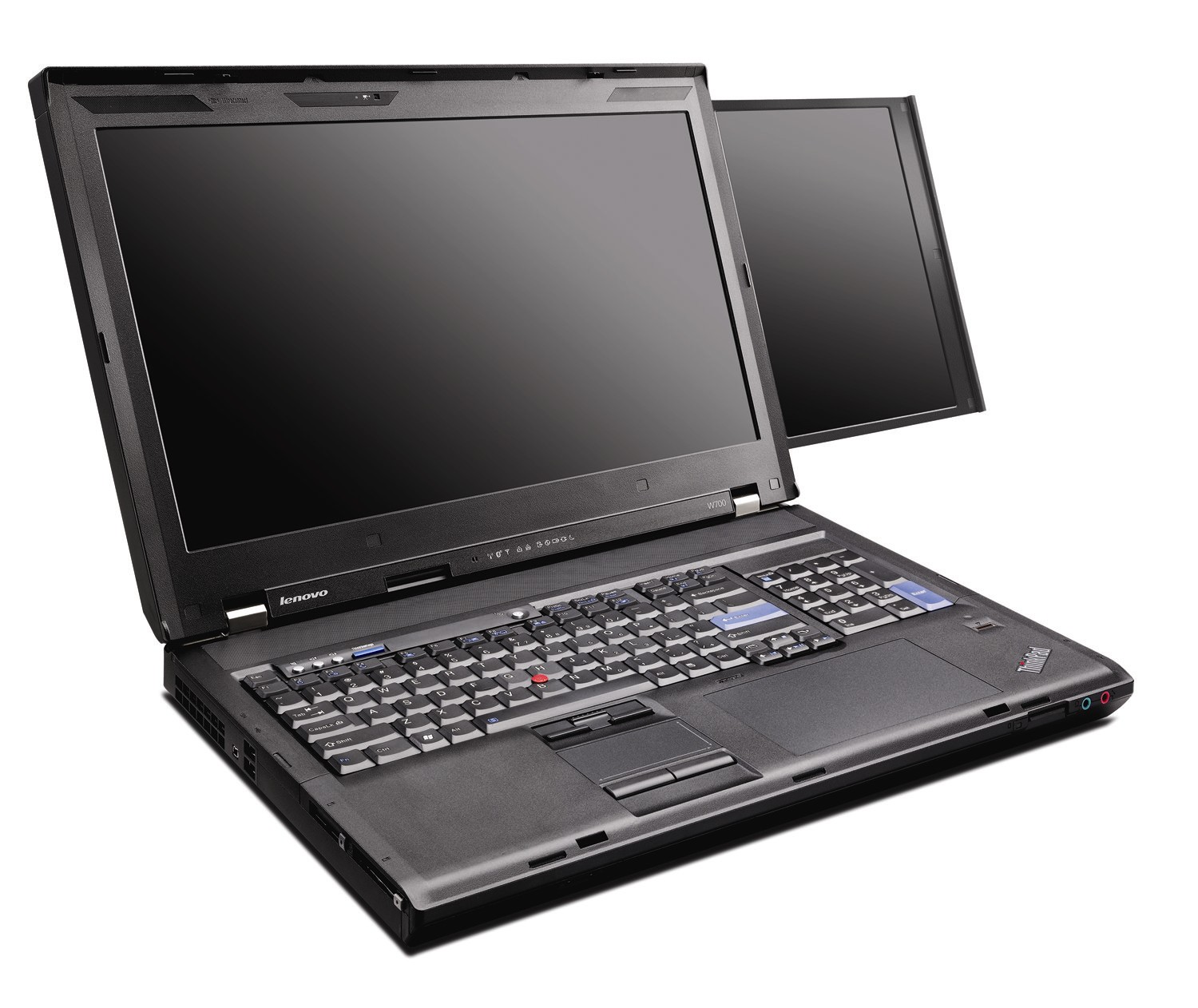 Sliding Screen Netbook — DigInfo has posted a video from the 2009 CEATEC trade show that offers possibilities. In it, a company called Kohjinsha shows off the DZ Dual-Display Netbook, which offers two 10.1-inch displays. In the standard position, one screen is hidden behind the other. By pulling on either side of the case, you can expose the second screen, and when fully extended, it appears that the two are hinged so they can be angled toward you. The DX Dual-Display Netbook is apparently available for pre-order now, though possibly only in Japan.

Full-size Sliding Screen Laptop — I can’t quite tell how the 15.4-inch screens on the gScreen Spacebook slide, but I’m guessing the mechanism is similar to Kohjinsha’s DZ Dual-Display Netbook, since the screen real estate expands horizontally. The Spacebook isn’t yet available, although the company’s site makes it sound like it should be real soon now. It will be a bit more svelte than Lenovo’s ThinkPad W700ds, weighing in at only 8.7 pounds (3.95 kg), but that’s still heavy, likely due to doubling the display glass. I can’t quite imagine Apple using an approach like this, simply due to the weight involved. 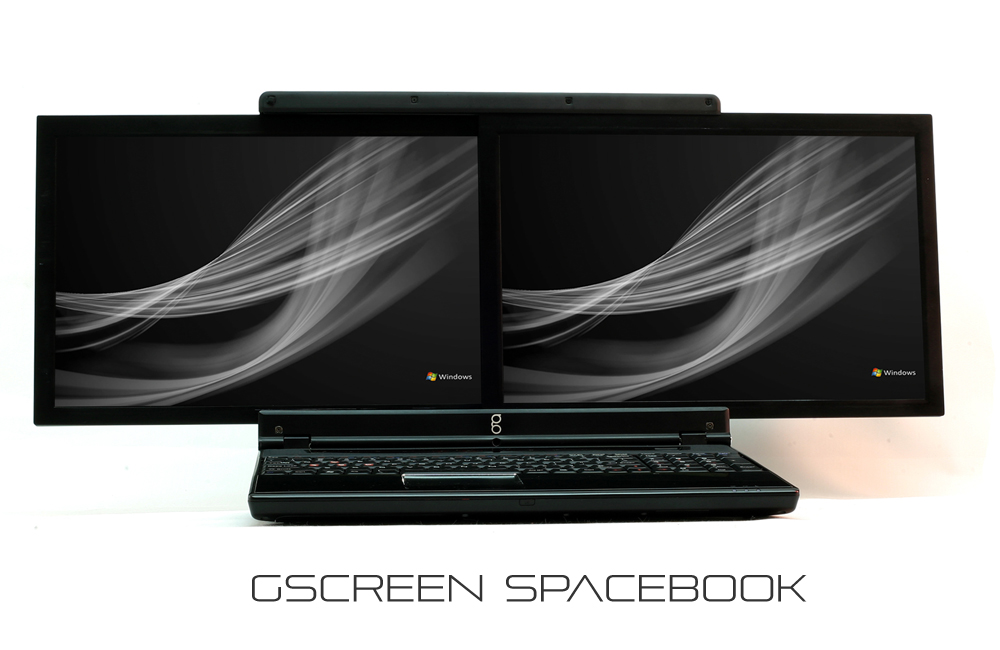 Small Auxiliary Screen — DigInfo also has another video, seemingly from 2007, of a prototype tablet PC that offers a small secondary display that swivels up from behind the main screen to sit above it. Both are touch screens. I couldn’t find any recent mention of this device, apparently called the e-detail and made by a company called Hub Tech. Overall, this approach looks and feels clumsy; I’m not surprised it didn’t make it into production.

Dual Clamshell Laptop, Take 1 — At CeBIT 2009, computer maker Asus demoed a concept laptop that eschews a keyboard entirely, instead offering a pair of touch screens that can change functionality based on the task at hand. Held vertically, the screens could offer a book-like reading experience, and held horizontally like a normal laptop, the bottom screen could offer a glass keyboard along the lines of the iPhone keyboard. The laptop, inspired from user comments on Asus’s WePC.com Web site, could also be interesting for use with
games requiring complex multi-touch controls. This strikes me as the most likely direction for Apple to go, should Apple decide to extend the iPhone/iPod touch concept up into the size of a MacBook. 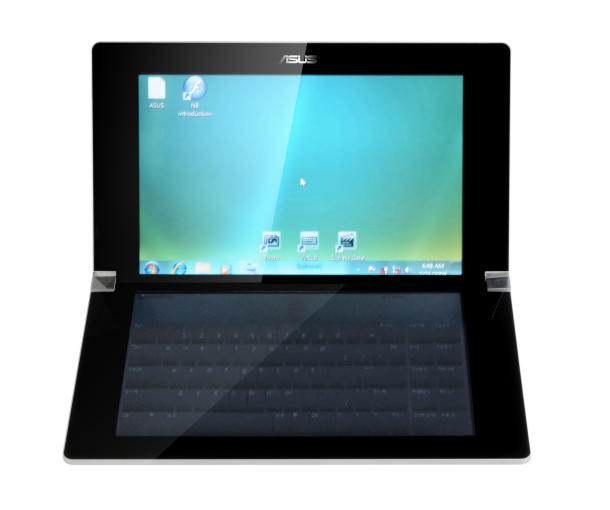 Dual Clamshell Laptop, Take 2 — Much like the Asus concept laptop, the Estari Canova eliminates a keyboard entirely in favor of a pair of touch screens. Where the Estari Canova goes further though, is with a truly fascinating hinge that allows the Canova to assume a wide variety of positions (pretty much all the Estari site offers is screenshots of the many possible orientations). Although the Virginia-based company claims to be bringing the Canova to market, it’s hard to tell if that’s likely to happen. Apart from the clever hinge, the rest of the industrial design is relatively pedestrian. 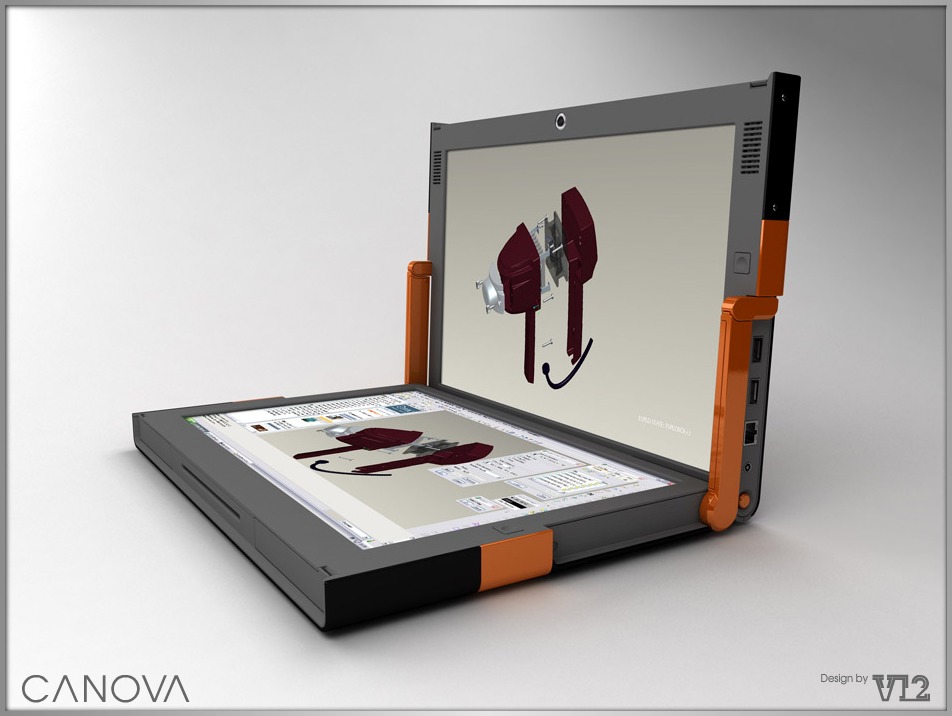 Screen Underneath Keyboard — Where the Estari Canova would use only a glass keyboard and the gScreen Spacebook has screens that slide out, the Ergonomic Dual Screen Split Keyboard Notebook Computer combines these approaches by hiding a second screen underneath the keyboard, which splits apart to provide access (scroll down on the linked page to find it). The company appears to be licensing the patented technology to OEMs, although it’s unclear if anyone has taken them up on it yet. Supposedly the split keyboard is more ergonomic, but honestly, it just looks funky, although the grey plastic case doesn’t help. 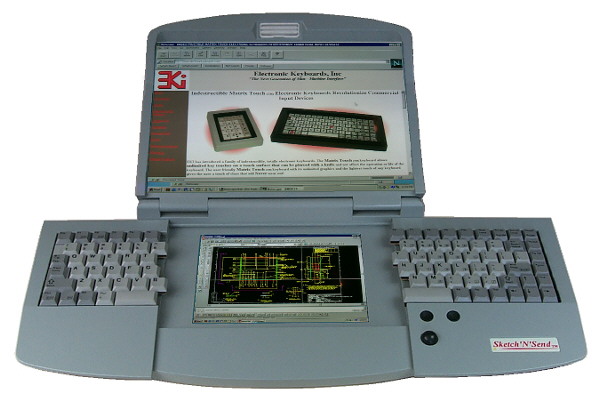 Dual-Screen Ebook Reader — By now, most people are familiar with what ebook reading devices generally look like, with Amazon’s Kindle offering the most well-known example. But ebook readers always settle for a single screen (though the Nook, from Barnes & Noble, offers a small touch screen for navigation and control), despite the fact that books always have two pages visible at all times. A research project that Nicholas Chen, François Guimbretière, Cassandra Lewis, and Maneesh Agrawala presented at the CHI 2008 conference offers an alternative – a dual-display ebook reader. You can
watch a video presentation of the prototype, or read more about it at Nicholas Chen’s site. Although the dual-display ebook reader is a research project and I haven’t seen any indication of it being commercialized, the demo is pretty compelling. The device can be opened like a normal book, but the hinge allows the screens to be folded back-to-back, or even separated and used independently, just as though you were working with multiple sheets of paper. Of all the ideas surrounding multiple displays, this one feels the most like something Apple would do.