Here at the Consumer Electronics Show, the most amazing thing I’ve seen so far is a blender. Don’t get me wrong – there are some truly cool technologies on display here, but this was one heck of a blender.

Tuesday and Wednesday were “press days” at CES, in advance of Thursday’s opening of the show floor. If you’ll pardon some discussion of inside baseball, it’s worth mentioning what happens here during press days. For the rest of the show, 110,000 of us wander among 2,500 exhibitors clamoring for our attention, spread out over several convention halls with a combined square footage roughly the size of Los Angeles. (Perhaps that’s a slight exaggeration, but trust me, once you’ve walked it you’d agree.)

During press days, however, approximately 70 exhibitors show their wares to members of the press who arrive here early, and who are liberally plied with buffets and open bars the entire time. This intensifies the attention paid to exhibitors who table in the advance space, and certainly affects the mix of coverage you read from the show.

Which is not to say that we’ve all been bribed and corrupted by free food and alcohol – certainly, on the freebie spectrum, this doesn’t compare to the Google Nexus One phones being handed out to the press at last week’s event in California. But it’s worth noting that other companies have a much higher bar to hurdle in terms of attracting media attention. I’ll note in my coverage which gizmos I’m seeing on the show floor, and which ones are packaged with perks for the scribes.

The irony of covering CES is that anyone at home who can stay glued to an RSS reader is going to hear about what’s here far faster than I will. So instead of reciting a litany of product announcements, I’ll focus on the releases which strike me as truly nifty – even if, in some cases, impractical.

First up in the nifty category are two handheld projectors that use lasers instead of an ordinary bulb. Laser-projected images remain sharp at any distance, so you just point them at a surface and off you go.

The Microvision SHOWWX is a handheld projector, smaller than an iPhone, which was demoed playing video from an iPhone and an iPod nano (it can also connect to a Mac via a VGA adapter). You can make the projected image as small or large as you like by changing the distance to the wall, but at larger sizes the image eventually becomes too dim to see. Microvision claims a maximum size of 200 inches (about 16.5 feet, or 5.1 meters) across diagonally; at 12-15 inches (30-38 cm) it was perfectly viewable under normal indoor lighting. 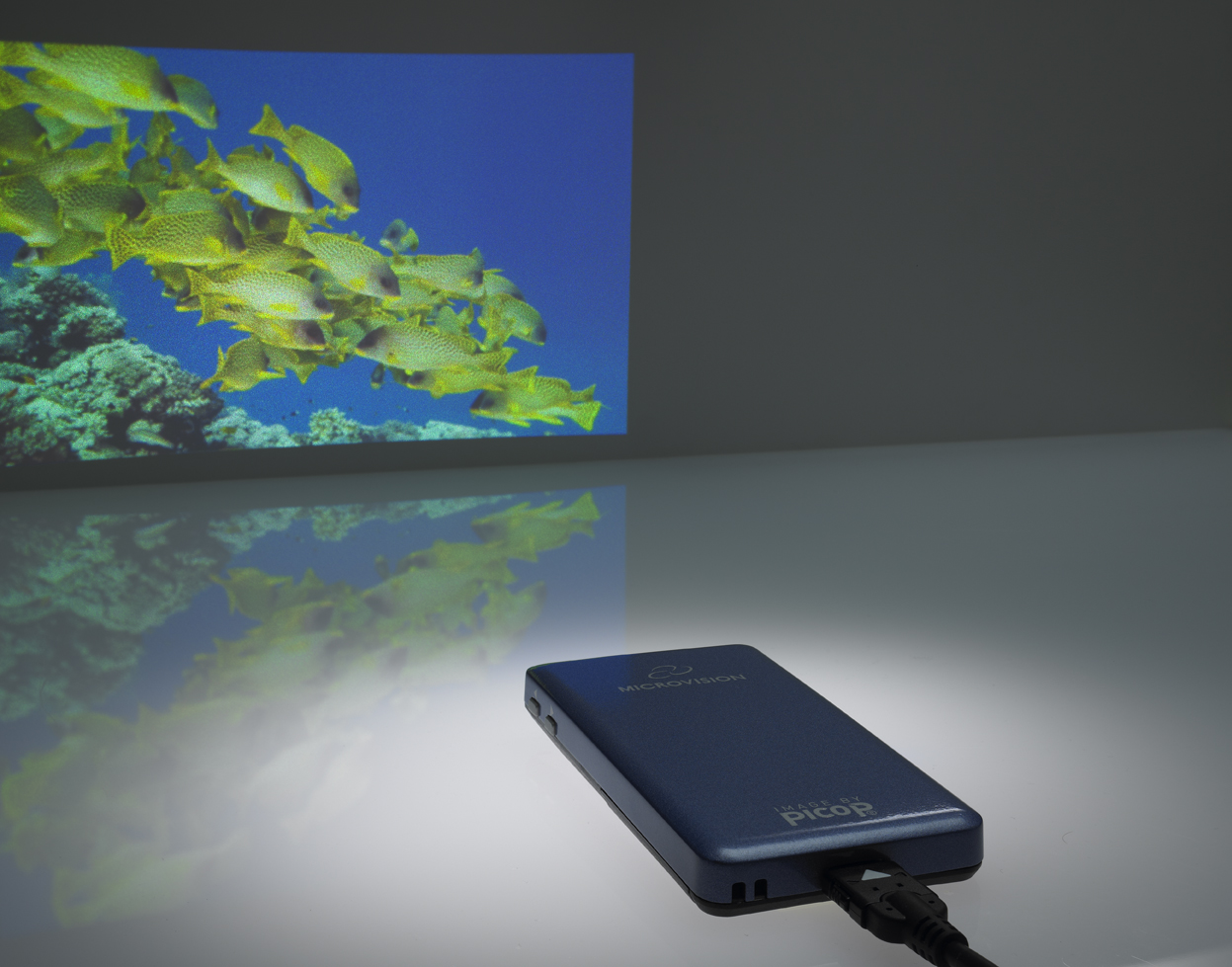 Even more jaw-dropping was the Light Blue Optics Light Touch, which projects a 10-inch (25 cm) display on any flat surface, and turns it into a touchscreen. Mount the Light Touch on any wall or table, and it becomes a Microsoft Surface that you could actually use. Light Blue Optics envisions this as being the infrastructure for interactive store displays and bar games; honestly, I’m skeptical on exactly how this technology will take over the market from established touchscreen technology, but I’d like to see it succeed purely to reward the innovation that went into it. [Editor’s Note: Also very cool is the
company’s Light Speed product, which projects useful information on a car’s windshield to help the driver focus on the road. -Adam] 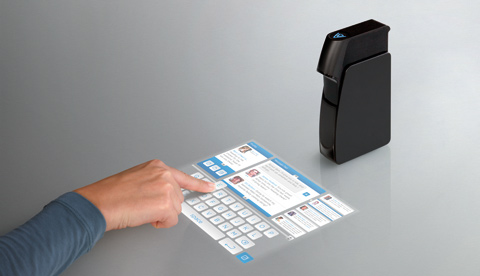 Outside of the projector category is the equally innovative, Datawind Ubisurfer, though it might not appear so at first glance. It appears to be a small, cheap netbook running Linux. The innovation is in the pricing plan; in the UK, £159 buys you both the hardware and 30 hours a month of included GPRS surfing over a cellular network with no additional fees. It’s like a Kindle for the entire Internet. Hardware compression makes the older GPRS wireless technology seem much faster; it didn’t feel like 3G, but it wasn’t unbearably pokey either. Datawind is looking for a U.S. partner to sell the Ubisurfer with the same pricing model to us Yanks.

A few tables over, Compulab was demoing their fit-PC2. This computer caught my eye because it makes a Mac mini look like it needs to sign up for Weight Watchers. At 4 by 4.5 by 1 inches (10.1 by 11.4 by 2.5 cm), the fit-PC2 is smaller than my 4-port Ethernet router. Despite the size, one model comes with 2 USB ports, 2 gigabit Ethernet ports, and DVI video out (watch the unboxing video for a sense of just how small it is). Plus there’s a whole computer and hard drive inside, and it runs on a meager 7 watts of power. Specs vary by model. I’ll be curious to see if this device joins the Hackintosh community.

Winning the “most insane technology” award by a country mile was the Parrot AR Drone, largely because it actually can fly a country mile. It’s a toy hovercraft, controlled by an iPhone or iPod touch over Wi-Fi; an onboard camera sends back a live image of whatever it sees to your iPhone (you have to watch this video to believe it). Ramping up the insanity level, Parrot released an API so third-party developers can create augmented reality games: fly your Parrot through a park, and you can theoretically shoot stormtroopers out of the trees like Han Solo in “Return of the Jedi.” The AR Drone is scheduled for release at the end
of 2010; pricing is not yet determined. Buy this gizmo quickly after it comes out, because I predict that after one whacks a toddler in the back of the head it’ll be off the market faster than lawn darts. And I’m sure the ACLU will be just thrilled at the thought of remote-controlled hovering cameras.

Finally, we come to the blender. It was a perfectly ordinary blender, sitting on a black box. It whirred like all blenders do. Then I noticed that there were no wires attached to the blender. It ran, like the toaster that sat next to it, on inductive power. There have been inductive power pads around for a while for charging low-power devices like cell phones, but blenders and toasters are orders of magnitude more thirsty for electricity.

The magic in the black box comes courtesy of Fulton Innovation’s eCoupled technology, which uses magnetic induction to create a current in receiving devices. eCoupled electronics communicate with the black box to tell it how much power it needs. Electronic devices within range of the box which do not communicate with it are somehow left out of the induction field. When I expressed concern that other devices would burst into flames while the wireless power was active, the presenter turned on the blender, put his cell phone down next to it, and offered to let me make a call.

I can’t say that I have an engineer’s understanding of electricity, but I was under the impression that magnetic induction is an all-or-nothing sort of thing. Fulton has apparently managed to create a power supply which can feed kilowatts to intelligent devices, without affecting other electronics within range. I think he probably could have cloned a cat, à la Nikola Tesla in “The Prestige,” and I wouldn’t have been any more surprised by the demo.

Common implementation of ubiquitous wireless power would completely change our relationship with technology. Picture a laptop with a battery that never runs down, because it’s constantly being charged. There isn’t a single electrical device that couldn’t benefit from this technology, and many would be transformed by it.

I can’t say whether Fulton will be the company that succeeds in bringing inductive charging to the mass market, but it was immediately clear to me that this technology is the future.

And that’s why we come to CES.

Comments About CES 2010: Blending the Future