It’s always sad when something comes to an end, but thanks to its creator, Brian Thomas, the groundbreaking multimedia project “If Monks Had Macs” that started 21 years ago will live on as a free download.

We’ve written about “If Monks Had Macs” in several of our gift issues in the past; rather than attempt yet another explanation of something that seemingly tries to defy all description, I’ll bring forward what we wrote in the past.

In 2003, Matt Neuburg described “If Monks Had Macs” like this: “I’m not sure whether this counts as software, a game, a multimedia experience, a book, or nostalgia. It’s ‘If Monks Had Macs,’ which started life as a HyperCard stack before I even knew HyperCard existed, turned into a Voyager multimedia CD, and is now available cross-platform, thanks to Runtime Revolution. If Monks (as we like to call it) is impossible to describe. It’s a truly visionary hyperlinked collection of books, music, art, games, and activities, plus several applications you can use separately, such as a hyperlinked journal-writer and an ebook text reader that works with Project Gutenberg files and other free online books. It’s genuine New Media – a
multi-dimensional, quirky vision from the mind of an eclectic thinker. If you’ve been wondering (and who hasn’t?) what Chesterton’s Father Brown, Heart of Darkness, Schubert, Thoreau, and the Kennedy assassination have to do with one another, this is your chance to find out. I remember the earliest If Monks incarnations with fondness, so this new version is on my wish list.”

And I wrote in 2004: “A word you seldom see applied to software is ‘thoughtful,’ and in this case, I mean it literally, as in ‘full of thought.’ But I can think of no better label for Brian Thomas’s ‘If Monks Had Macs,’ an interactive multimedia CD-ROM title that defies prosaic description. It’s packed with original texts from the like of Henry David Thoreau and G.K. Chesterton, highly readable essays and critical analyses, a visual exploration of Pieter Bruegel the Elder’s Tower of Babel painting, a telling of the story behind an underground newsletter called The White Rose from a student resistance group in Nazi Germany, and far more. A playful sub-current swirls through everything – there’s an illustrated medieval text adventure game
(you’re a monk, needless to say) in which you find cards for a solitaire game. A journaling application helps you record your impressions and musings as you meander through the application’s many byways. ‘If Monks Had Macs’ started out life years ago as a HyperCard stack (now converted to Runtime Revolution, supported by a separate ebook reader), and that retro aesthetic now merely adds to the whimsy.” 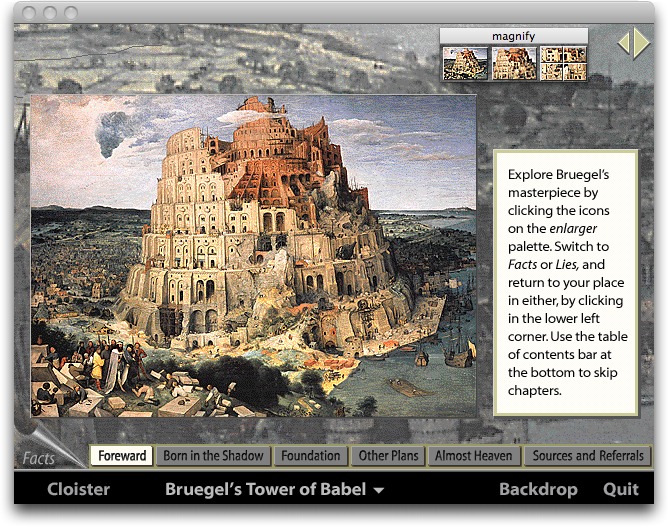 Brian Thomas isn’t just shoveling old software onto the Internet; he has worked to remake the Killing Time game (also available as a free download, and it’s only about 10 MB), and has added more recent photos and essays to the main project. But as he told me, he’s returning to his roots as a photographer, and is leaving shortly for Cambodia. Before he left, he wanted to make “If Monks Had Macs” available for free download.

But it’s not quite as easy as it seems to distribute a 130 MB disk image, and after some discussion on TidBITS Talk, Brian opted for three disparate methods, all of which are free (to him and to downloaders, which was important), but which all have their limitations. They’re outlined below for anyone else who is thinking about distributing a very large file to the public. All three download methods are linked from Brian’s Web site.

I would strongly encourage people to download a copy of “If Monks Had Macs” via BitTorrent soon, purely to make sure you have a copy while it’s definitely still available. And, if you have plenty of bandwidth, leave your BitTorrent client running to seed the file to other people, which will lighten the load for everyone.

Kudos to Brian Thomas for refusing to let “If Monks Had Macs” simply fade away, and we wish him the best of luck.

Comments About “If Monks Had Macs” Available for Free