Internet troubles delayed my arrival on the CES show floor (see “CES 2010: Living in the Past,” 8 January 2010), so this second roundup comes from another one of the “wine and dine the media” events, this time organized by ShowStoppers. These guys aren’t affiliated with CES (they have an event coming up at Macworld 2010), but another 100 or so of the CES exhibitors showed up here to take advantage of the favorable exhibitor-to-press ratio that I mentioned in “CES 2010: Blending the Future” (7 January 2010).

Not all of the gadgets on display at ShowStoppers are new; much of what I saw was announced in the past two or three months. There was even a booth by MagicJack, the people who sell ridiculously cheap VoIP phone service on infomercials at 2 AM. “What could be less newsworthy than that?”, I thought as I planned to open this article with an amusing comment at their expense.

So I have a bit of egg on my face from seeing their announcement that they are making news: they have a new product that communicates with your GSM cell phone (i.e., anything from AT&T or T-Mobile) and gives you unlimited talk time while you’re within range of your MagicJack home device. Your calls are routed through the MagicJack, so your cell minute bucket is never touched. The interesting bit: your cell phone uses licensed radio spectrum, and unlicensed companies aren’t allowed to use it. MagicJack claims it’s legal for them to use licensed spectrum within a private residence; the cell phone companies beg to differ, and that cocking sound you just heard was 1,000 lawyers arming for battle. We’ll see what happens.

The jaw-dropping demo of the night award goes to Shapeways, a 3D printing service based in the Netherlands. Shapeways allows you to create a 3D model of pretty much anything you like and upload it to their service, at which point they’ll make it real in one of nine materials, including metal, sandstone, and plastics. Or you can customize existing models with your own designs or color imprints. The range of items on display was impressive: vases made of custom text spiraling to the base, bizarre metal creatures, and picture frames of all descriptions. Shapeways pricing varies by model; they’ll ship it to you free. They also run a store where you can buy 3D objects modeled by others. 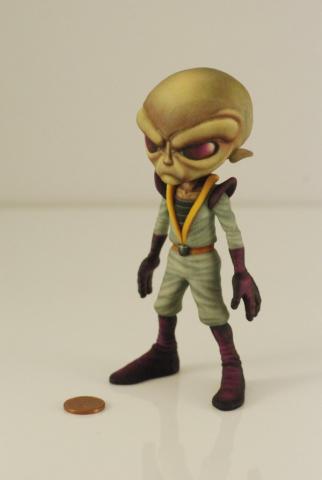 [Editor’s Note: If you’re intrigued by the promise of 3D printers, you must read Cory Doctorow’s latest novel, “Makers,” which, thanks to Creative Commons licensing, can be downloaded and read for free; there’s even a neat iPhone/iPod touch-specific site for it at wayner.org. -Adam]

Plastic Logic was demoing their QUE ProReader: think Kindle with a nearly 11-inch diagonal display. The QUE impressed me with its lightweight all-plastic construction; Plastic Logic says that it’s almost unbreakable, unlike the glass screens used in other ebook readers. The top-of-line model ships with 8 GB of memory, Wi-Fi, and AT&T 3G service included in the price tag. It’s pronounced “Q”, but you might be saying “¿Que?” after you hear that it will set you back $799.

If you have a teenager who has just started driving, two things are certain: you fear for his safety, and you could use a good passive-aggressive method of ruining his life for all the heartache he’s putting you through. Kill two birds with one stone with the $299 Tiwi, which monitors his driving behavior and provides him with voice alerts telling him when he’s speeding, driving aggressively, or generally allowing his hormones to steer. You get SMS alerts and other updates. The best part: there’s a grace period of allowable bad behavior before it is reported to the parents. I’m impressed by any technology which essentially says, “We know you’re going to game us, kid, so here’s exactly
how much you can get away with.”

I’m shopping around for a new Twitter client while I’m here at CES, and thanks to an effusive fan at the Seesmic Desktop booth, I’m giving it a try. I was chatting with their Community Evangelist trying to figure out what differentiated Seesmic from 1,000 other Twitter clients, when a random marketing guy walked up to the CEO and said, “Man, your software changed my life.” (Later, to me: “Really, I’m not a shill. I normally don’t talk this way about products I’m not pitching.”) Seesmic runs on Macs as an Adobe AIR application, but aside from some bizarro fonts, it looks more Mac-like than most AIR apps. 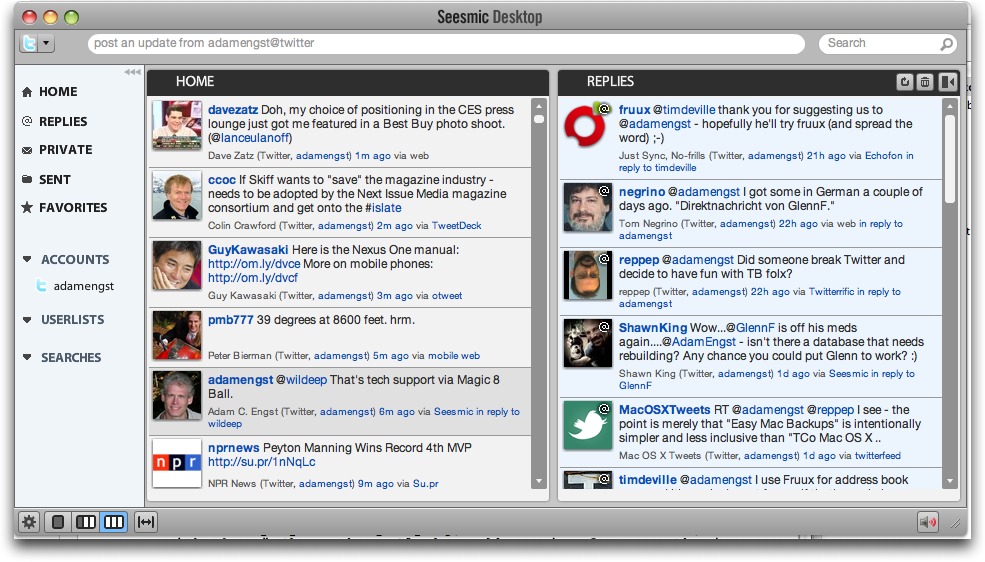 I was impressed by the user interface on the L5 Remote, a hardware dongle that adds an infrared remote to your iPhone or iPod touch. You train it much like any other universal remote you’d buy in the store, but then you drag only the buttons you actually use for that remote onto a customized display. Remote interfaces are chosen from a menu, which itself hangs off a menu of rooms in your house, providing an intuitive way of getting to exactly the gadget interface you need. The L5 remote costs $50, and is due out in February 2010.

On the other hand, if you prefer using your iPhone as your entertainment device, you might want to check out Slacker Radio, whose booth guy introduced the company to me by saying, “You know Pandora? Well, we compete with them.” Okay, then. Slacker adds a nice feature: they’re licensed to buffer your radio station in advance on your iPhone or iPod touch, so you can listen to it even when you’re not connected to the Internet via cellular or Wi-Fi.

I’d be tempted to listen to Slacker on JayBird’s BlueBuds headphones, which are exactly what they say they are: Bluetooth earbuds on a head-sized wire connecting your ears (described only in this PDF catalog for the moment). The earbud attachment bends around your ear for a firm fit, and there’s no wire dangling from your ears to your iPod. BlueBuds will be available in April 2010 for $129; if your iPod nano or touch isn’t rocking Bluetooth yet, JayBird will have a $69 adapter available in February 2010. 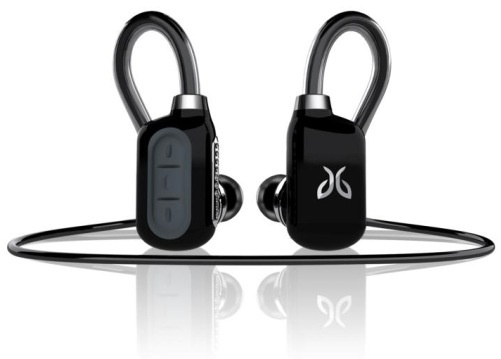 Falling on the line between cool and creepy (but leaning heavily into creepy) is Intelius DateCheck for iPhone. With the charming tag line of “lookup before you hookup,” DateCheck gives you an all-in-one interface to run a background check on a random stranger you meet at a bar or online (once you’ve gotten to the real name swapping stage). I agreed to let them run it on me; DateCheck says I’m 46, and live with my parents and an aunt. I’m younger, my parents are dead, the aunt doesn’t exist, and I haven’t lived at that address since the Reagan administration. But at least now I know, when I see my date pull out her iPhone, I’m probably toast.

Last, and definitely least, falling squarely into the cruel joke category for longtime Apple fans, I was attracted to a company named Newton Peripherals. Unfortunately, instead of a memory card adapter that would allow me to run Google’s Chrome OS on my Newton MessagePad 120, I found that they had only Bluetooth peripherals for BlackBerrys. Feh.

CES 2010 Entertainment iPhone, iPad, & iOS Networking Tech News
Cookies & Privacy: We wish we were talking about chocolate-chip cookies here, but our Web site—like nearly all others—relies on a few minor digital cookies. Various laws around the world require us to tell you that fact, so consider yourself informed, if not nourished. By continuing to use this site, you agree to our use of these cookies. Cookie and Privacy Notice