For the record, I like Firefox. I like the way you can type anything in the address bar and get good results, I like the way it can automatically reopen tabs after being quit, and I like the fact that its searches look inside textarea fields in Web apps. It’s my main Web browser.

So when Firefox 3.6 was released last week, I happily went looking for release notes, hoping to find something that would make Firefox even more useful to me. The good news is that Mozilla claims that Firefox 3.6 is 20 percent faster than 3.5, form autocomplete now lists items in order based on a combination of frequency and recentness, and tabs opened from links can (but don’t have to) appear next to the current tab. I’ll have to see if this final feature is worthwhile, but when you have a lot of tabs open, having a new one appear way off to the right-hand edge of the tab list can be awkward. Nice stuff, but not game
changing.

A couple of features should make Firefox 3.6 more secure, most notably the program’s capability to alert you to out-of-date and insecure plug-ins. (Plug-ins, not to be confused with extensions or themes, make it possible for Firefox to display an otherwise unsupported type of data, like QuickTime movies, or communicate with external hardware, like the Garmin Forerunner GPS watch.) When you click Find Updates from the Plugins view of the Add-ons window, Firefox sends you to the Plugin Check page, which displays the status of your plug-ins. The only problem is that Firefox was unable to determine the version of six of my ten plugins, even though three of them had the version number
in the name, rendering it relatively useless. And although it claimed the other four plug-ins were up to date, two of them (Silverlight and Shockwave Flash) actually had minor updates available when I clicked the Up to Date button. My confidence is not inspired. 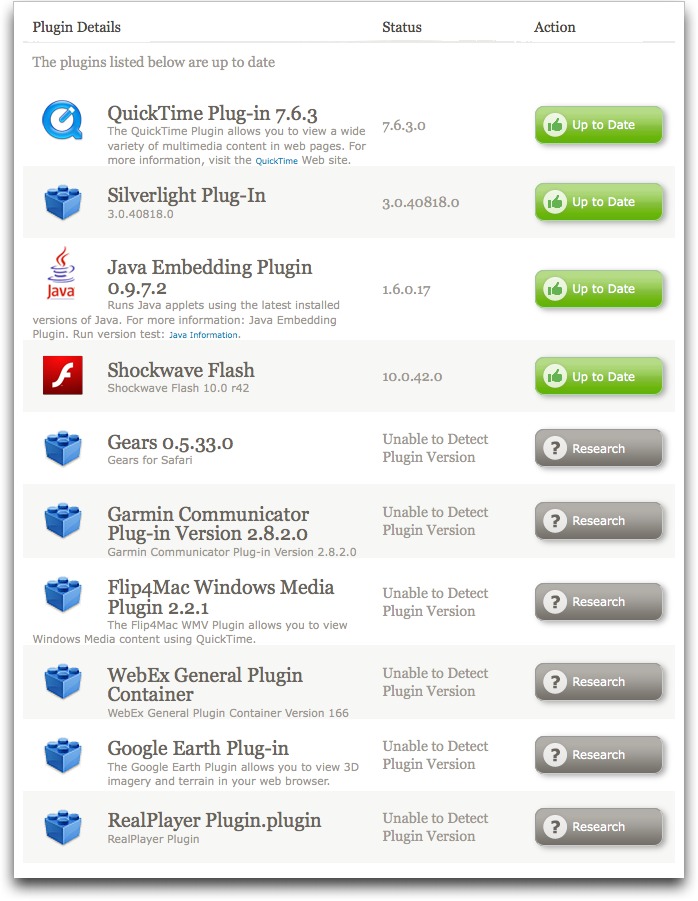 Other changes are aimed at Web developers, who can now indicate that scripts should run asynchronously to speed up page load times, and can now specify downloadable Web fonts using the new WOFF font format. Firefox 3.6 also includes support for new CSS attributes such as gradients, background sizing, and pointer events; plus support for the new DOM and HTML5 specifications. Those last two should enable Web apps to incorporate both drag-and-drop and access to the local filesystem, further blurring the line between Web and desktop applications. Finally, Firefox 3.6 eliminates a legacy method that third-party software could use to tie into the program to reduce the incidence of crashes
caused by that software.

Then there were changes that I’m sure someone will appreciate, but which I personally can’t see myself using, such as Full Screen mode, which might be useful in kiosks. Ogg/Theora videos can now be viewed full-screen as well, though I’m not sure I’ve ever run across one of those. And while I guess it’s nice that the private browsing feature now removes TEMP files, that seems largely of utility on public and shared systems.

Personas — All of these features probably sound pretty minor, and indeed they are. But Mozilla apparently decided it needed something sexier for the Firefox 3.6 release, and so came up with “personas.” As you may or may not know, Firefox supports themes, a way of changing the visual appearance of the program. In Firefox 3.5 and earlier, finding and installing themes worked much like finding and installing extensions – you had to find the theme somewhere on the Web (possibly in Mozilla’s add-on directory), click an install button on the page, and restart Firefox. User-friendly it wasn’t.

So with Firefox 3.6, Mozilla has introduced personas, which, as far as I can tell, are simply a graphic that replaces the standard gray background behind toolbars, tabs, and other window dressing at the top of the Firefox window. Personas appear to be minimal themes; you can manage them in the Themes view of the Add-ons window, but they don’t modify Firefox’s button types or dialogs, which themes can do. And where full themes still require that you jump through the install/restart hoop, personas can be previewed simply by moving your cursor over a thumbnail and don’t require that you restart Firefox (presumably because it’s really easy to change the look of a window, but much harder to modify buttons and the like).

Now, I don’t want to come off as a complete fuddy-duddy, but after previewing 30 or 40 personas, I can’t see anyone who relies on toolbar buttons and tabs using them. Mozilla advertises that there are over 30,000 designs in the Personas Gallery, but a few minutes of testing makes it clear that it’s nearly impossible to find a persona that looks good without obscuring text in toolbar buttons and tab titles. Awkwardly, many personas need the vertical height afforded by additional toolbars showing – I have the 1Password and Google toolbars – but all that extra text offset against an image just exacerbates the readability problem.

For example, the Fractal Elemental persona, which is an undeniably cool image, renders the text on my toolbars nearly unreadable. And the Martin Luther King Day “Keep Climbing” persona is barely visible at all if I turn off my Bookmarks, 1Password, and Google toolbars. I didn’t have to search hard for examples that fail; these two were both featured on the main page of the Personas Gallery.

The Personas Gallery reports how many people are using each persona, and some of them are quite popular, with thousands of active users. (The most popular persona had 208,000 users when I first drafted this article, and the next one had 54,000 users; three days later, those numbers have fallen to 176,000 and 46,000, and the overall popularity numbers drop off fast from there.) Regardless, the massive usability problems caused by personas make painfully clear just why Apple has never embraced themes in Mac OS X. I’m not saying there couldn’t be good personas, or even that there aren’t, among the 30,000 that are available. But the fact that there are so many thousands of
personas guaranteed to cause visual conniptions shows just why professional interface designers can find jobs.

My advice? Feel free to try out some personas, but unless you quickly hit on one that’s both attractive with whatever vertical space your toolbar choice affords while not horribly obscuring toolbar and tab text, give the feature a pass.

Otherwise, Firefox 3.6 seems like a fine update to an already capable Web browser, and if you already use it, I see no reason to put off upgrading. (Well, as is always the case with Firefox, a new version will require some extensions to be updated, so if you rely on a particular extension that hasn’t yet been updated, like Google Gears, you might want to wait for that.) But Firefox 3.6 is certainly nothing so special to make a happy Safari user want to switch. Personally, I’m running Firefox, Safari, and Chrome all simultaneously now, and you know what? They’re all pretty much fine, with minor strengths and weaknesses but no glaring differences.