No one does a demo like Steve Jobs, but a successful Apple event involves far more than just Steve on stage. Glenn Fleishman and I attended Apple’s iPad introduction last week, and while you’ve read all about the iPad in TidBITS and other publications, here I’d like to give you a feel of what it’s like to be there in person. I hope my photos capture the spirit of an incredibly long and exciting day: the crowds, the characters, and the feel of being among the first to see and handle a new Apple product.

(Click any photo to view a larger version. You can also view this photo essay as a slideshow at Flickr or at my MobileMe Gallery, though without the explanatory captions.)

Pretty Darn Early — To get to the 10:00 AM event in time, Glenn Fleishman and I flew from Seattle to San Francisco on a 6:00 AM flight, which meant I was up and making coffee at 3:30 AM. 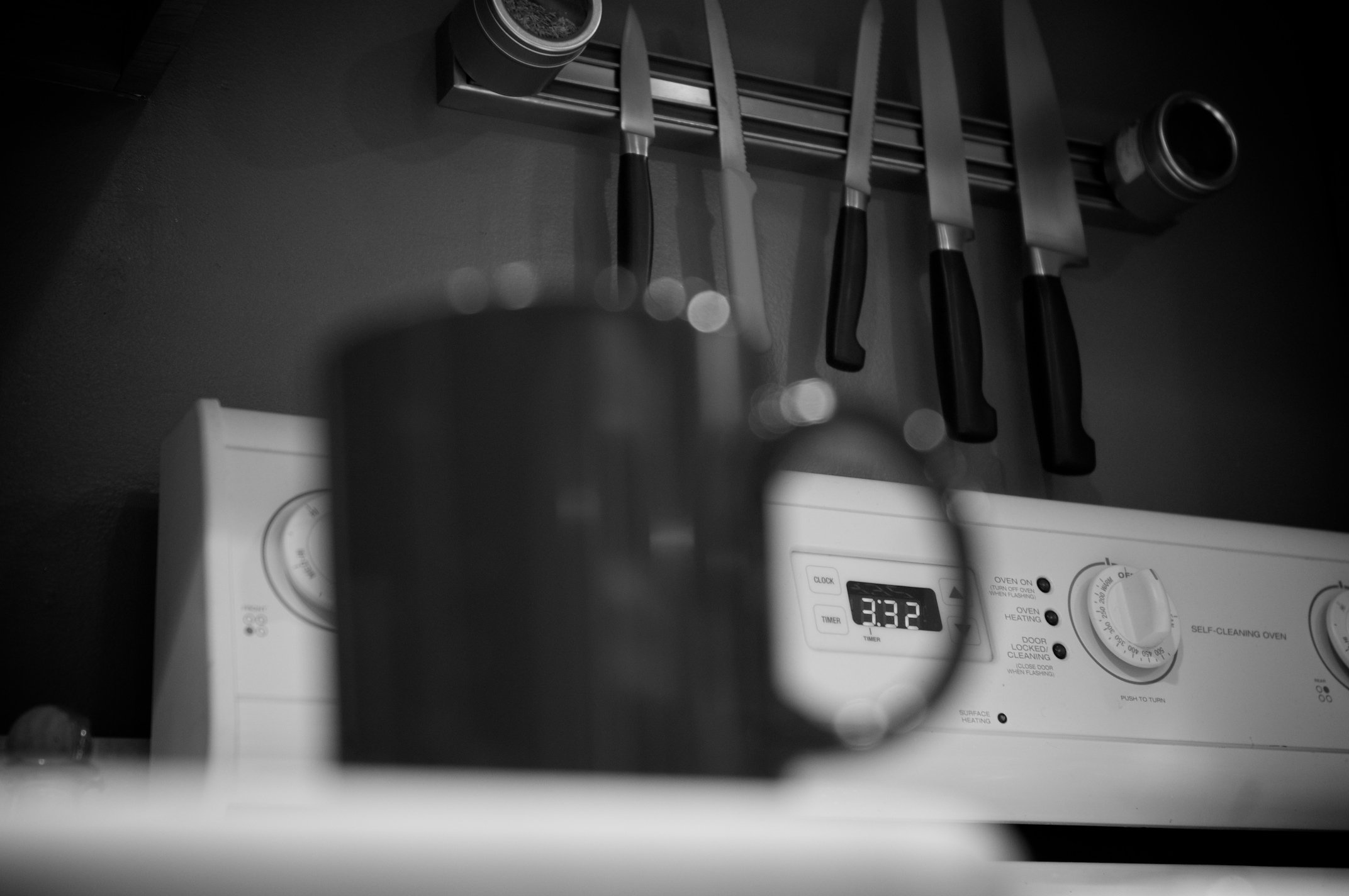 Sunrise and Email on the Plane — Glenn gets online on our Virgin America flight from Seattle to San Francisco. Flying Virgin America was a dream: Wi-Fi, great service, and power outlets between the seats. Jim Dalrymple and The Beard — Jim Dalrymple of The Loop on his way to Apple’s iPad event. The hype around the iPad drew hundreds of technology and mainstream journalists. Contrary to appearances, The Beard did not, in fact, eat that bicyclist. 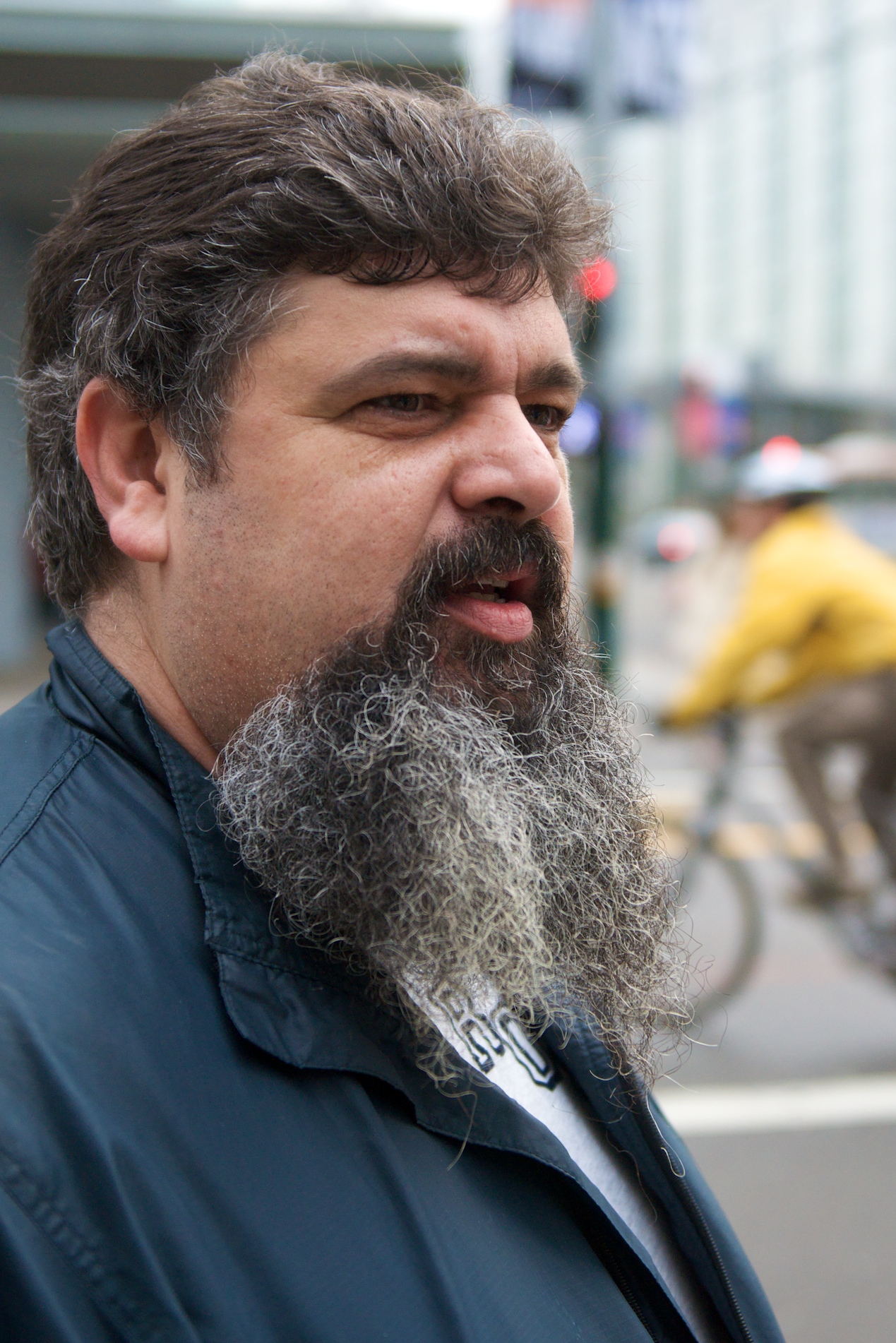 Waiting for the Event — Members of the media gather outside the Yerba Buena Center for the Arts. It’s not the same as waiting in line at 4:00 AM for the Macworld Expo keynote addresses of yore, but there’s still a lot of standing, waiting, chatting, waiting, and maybe even some slow jockeying for position. 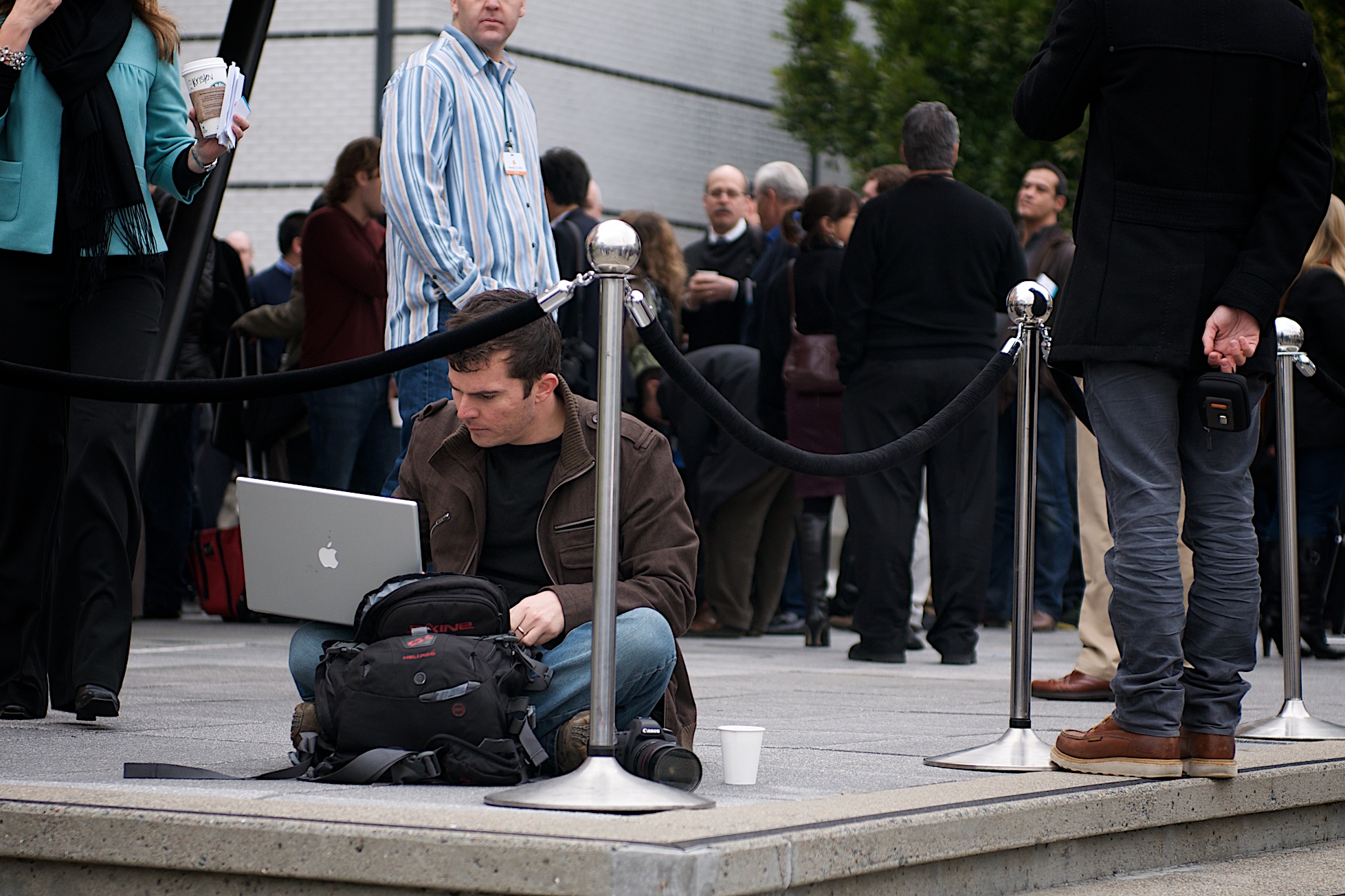 Xeni and Glenn — Boing Boing’s Xeni Jardin and Glenn wait in the media area for the iPad event to begin. 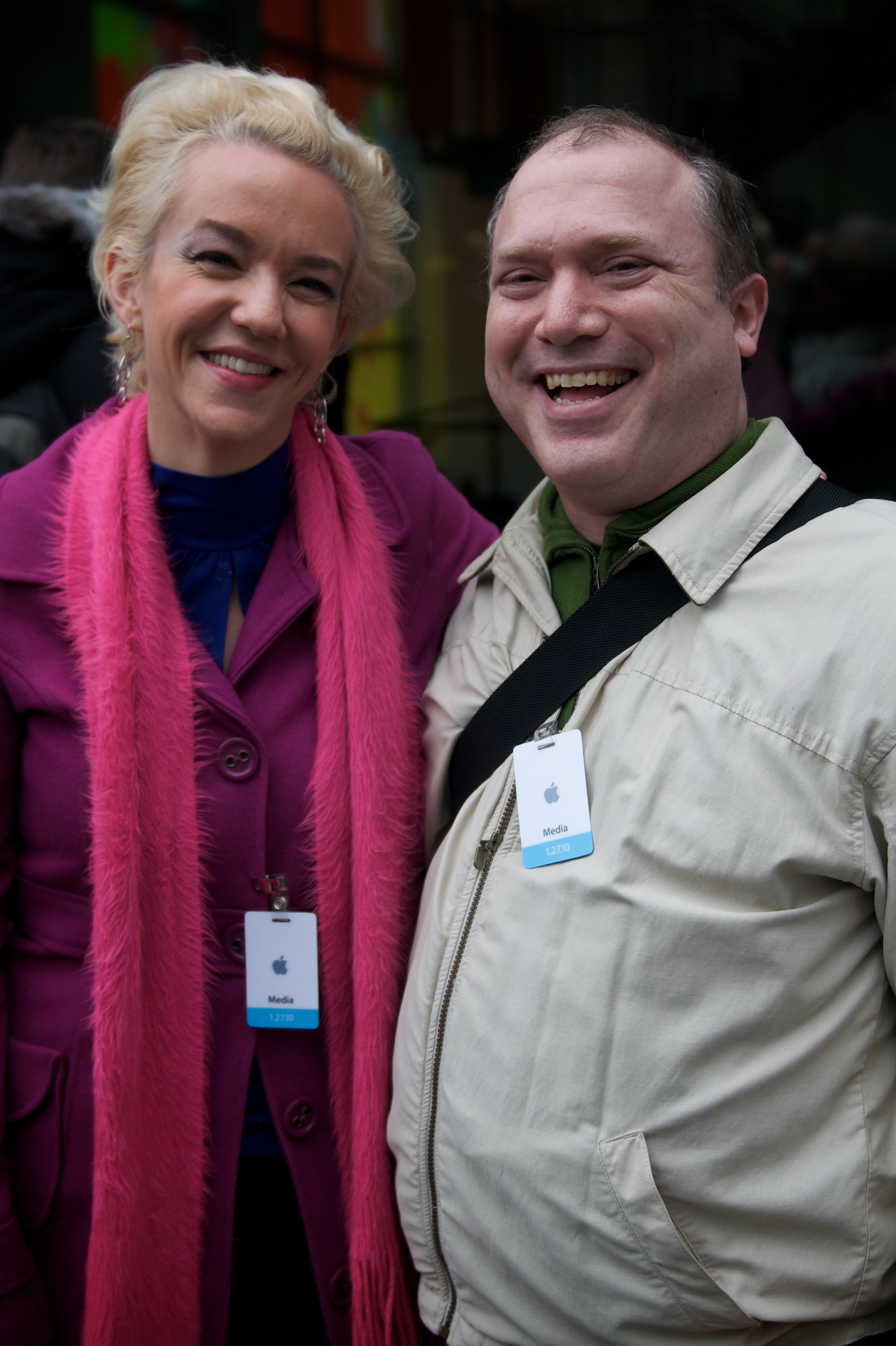 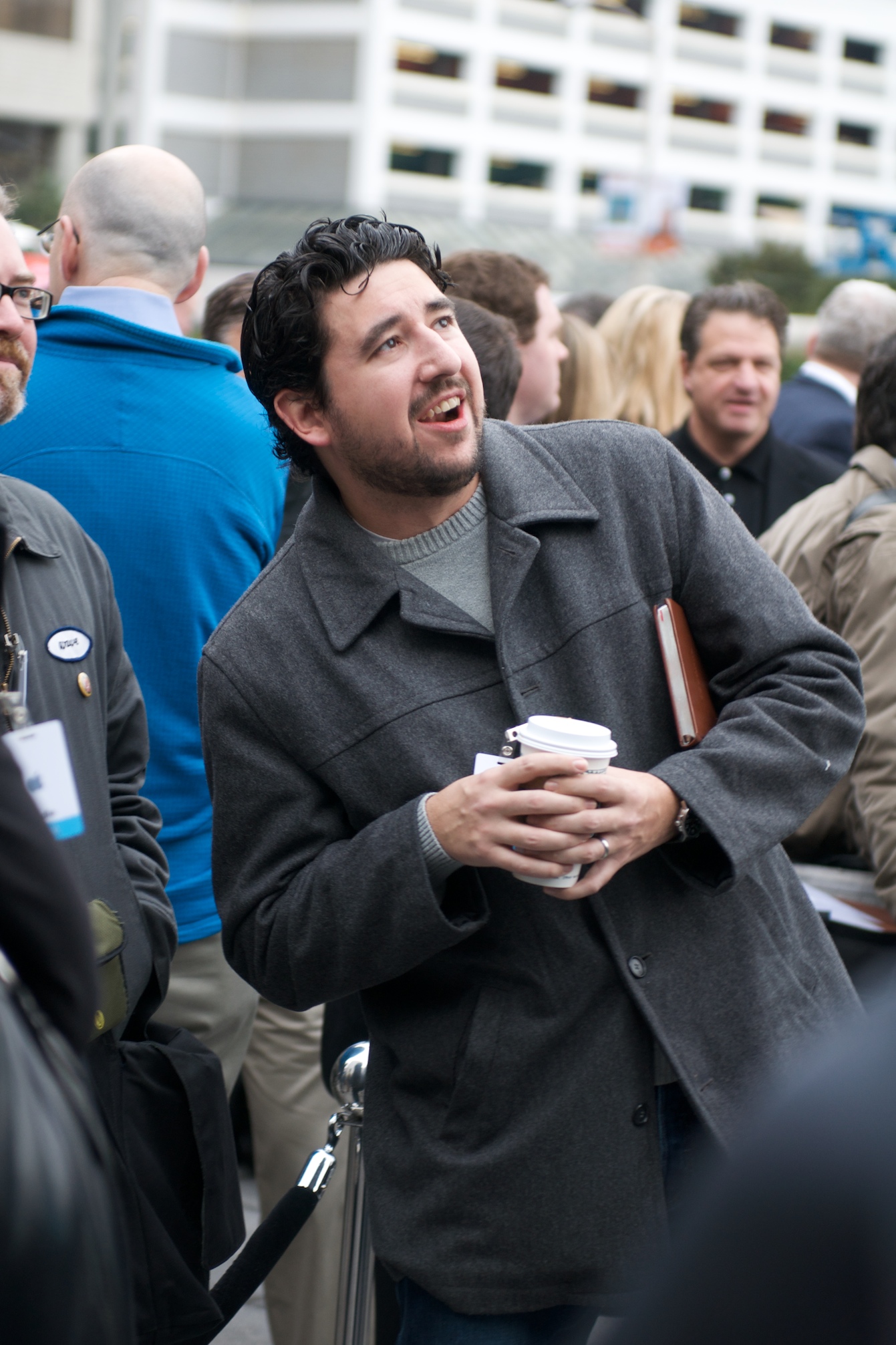 Apple Employees Waiting — Shortly before opening the doors to the iPad event, Apple employees peer out at the throng waiting to enter. 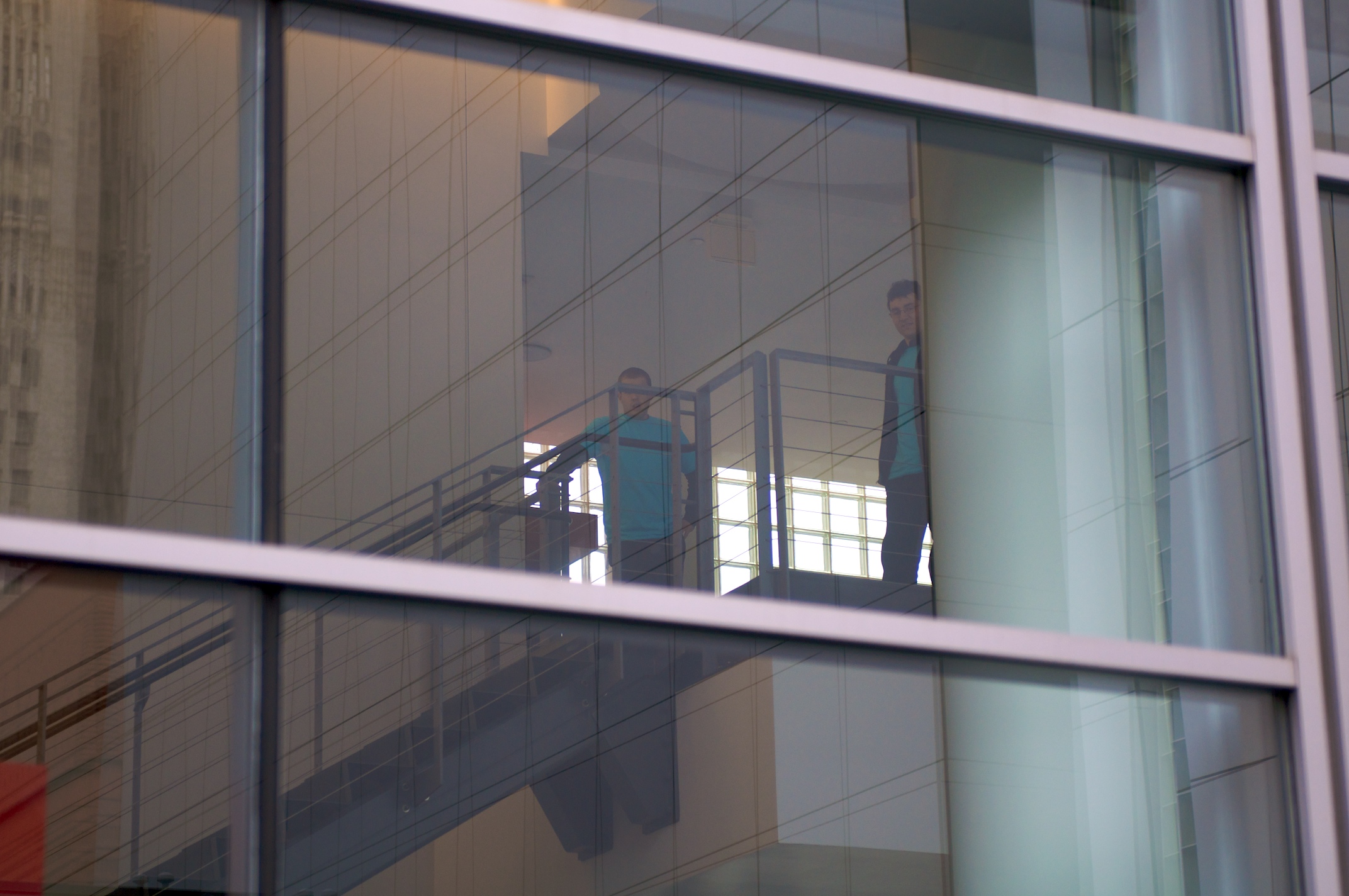 Doors Open — Media are a polite and patient lot – just don’t cut ahead as we try to squeeze through two doors to see what Apple is going to introduce. 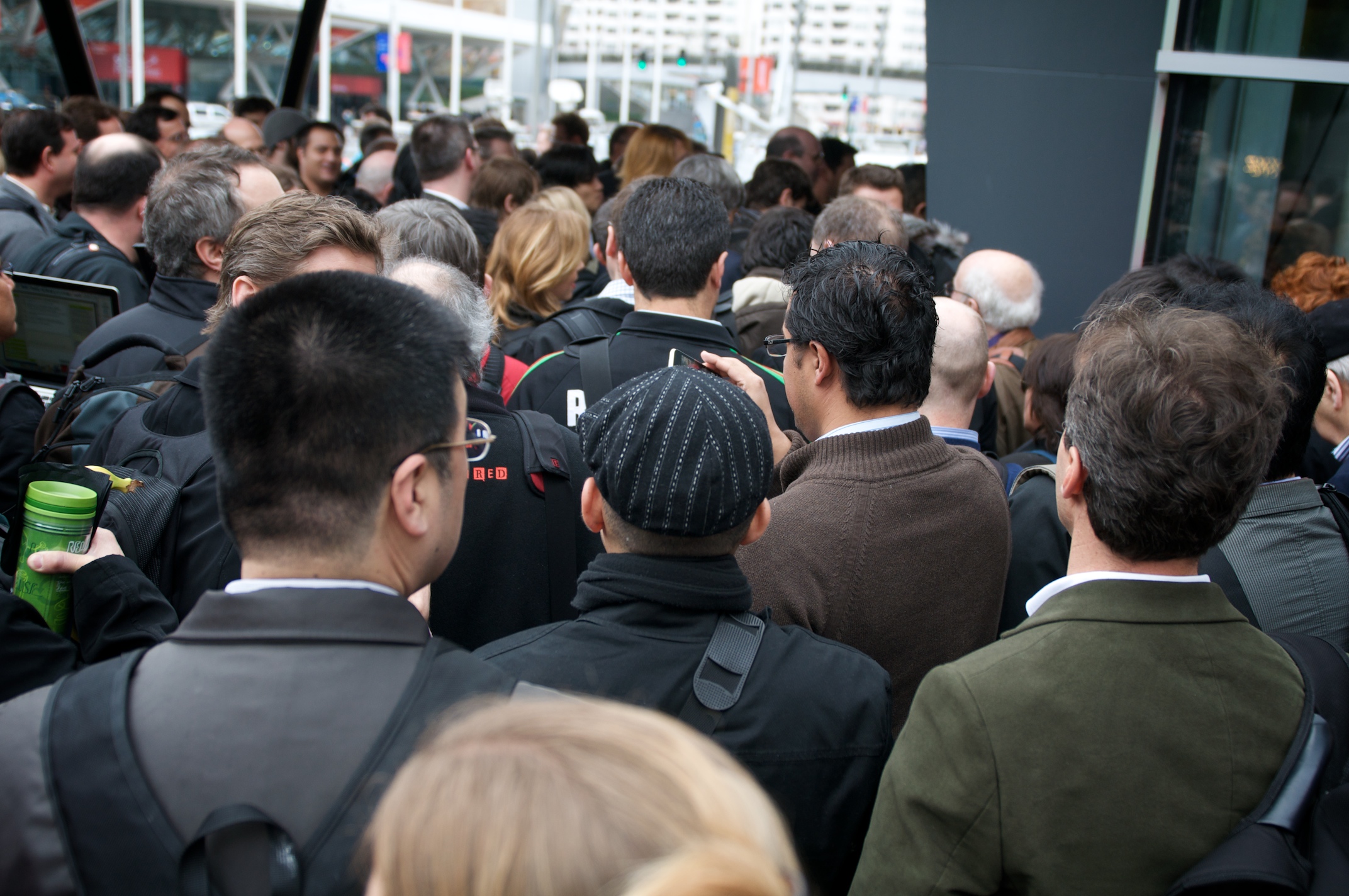 Milling Inside — The inside of the Yerba Buena Center for the Arts isn’t terribly large, so many had to scramble to find seats. Camera crews get their own platform, while special guests and VIPs socialize in the seating area closest to the stage. 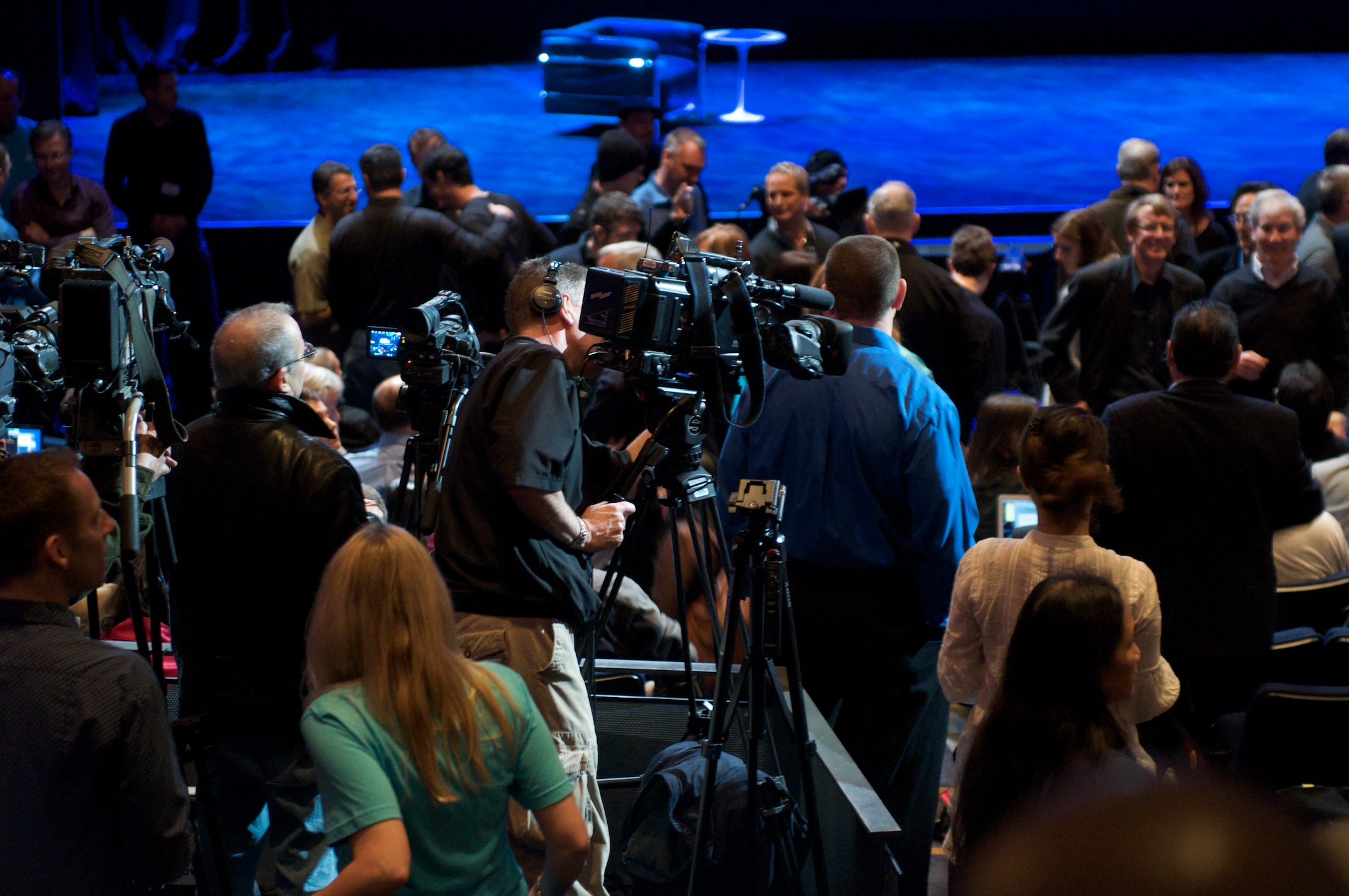 Steve Jobs Onstage with Young Steve Jobs — Note that the screen reads “Apple Computer…Available at Byte Shop”, and then below that, “HELP ME”. VIPs after the Event — After the iPad introduction, Apple CEO Steve Jobs (at left, facing away) talks with special guests. Stephen Fry, multi-talented multi-hyphenate and technology geek extraordinaire, looks out over the crowd. Hands-On with iPad — Following the iPad introduction, members of the media were escorted to a nearby building where we could use Apple’s new device. For the first half hour or so, it was difficult to get any closer than this. 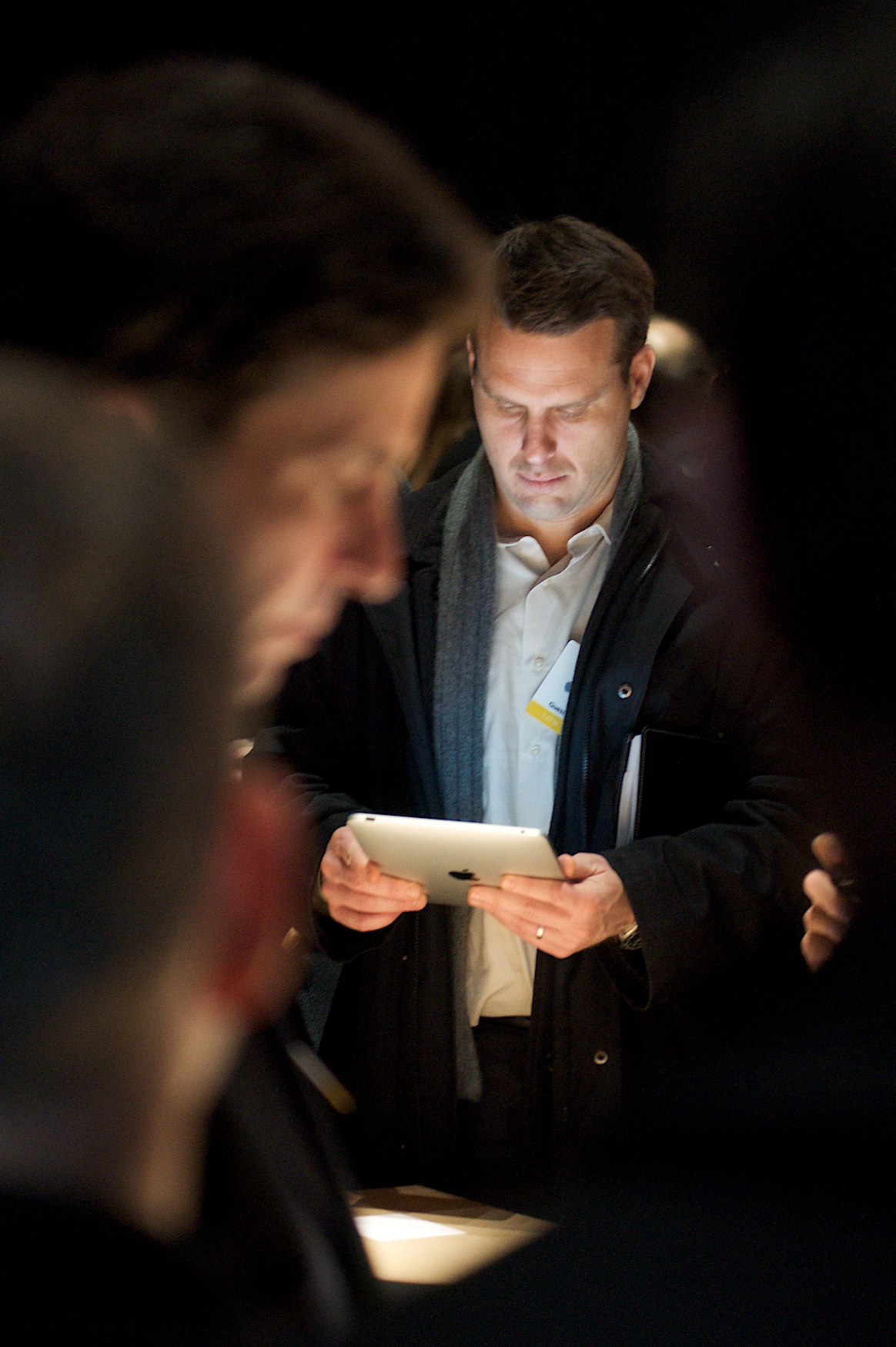 Crowds around the iPads — Despite Apple’s high-resolution images of the iPad, everyone (including me!) had to snap their own photos of the new device. We’re getting closer to being able to touch it. Andy Ihnatko’s Hand Writing Recognition — When I spotted Andy, it looked like he had picked up an iPad and begun writing on its surface with a pen. (He was actually writing on his hand.) Glenn Demoing iPad — Despite the crowds, we got to spend a good amount of time with the iPad. The Apple employees in charge of each demo unit were extremely polite and open about what they did or did not know about the device. (One commented that we had experienced more hands-on time than he had. Apple employees usually don’t know what the magic product reveal is until shortly before they’re expected to answer questions about it.) Steve Jobs in the Demo Hall — Steve Jobs took a quick tour through the demo hall where members of the media were getting hands-on time with the iPad. Jobs is always easy to spot: look for the denser-than-usual crowd and lots of television lights. Writing at Starbucks — Glenn works on his coverage of the Apple iPad announcement at a nearby Starbucks. Mmmm… lattes and Wi-Fi… Your Tired Correspondent — That’s me, Jeff Carlson, waiting for the BART train to take us back to the airport. We flew to San Francisco at 6:00 AM that morning and flew back to Seattle 12 hours later at 6:00 PM.