The iPad models that come with Wi-Fi and 3G will let users choose, on a month-by-month basis, whether to pay AT&T for 3G data service at one of two service levels. The unlimited plan is $29.99 per month, just like the iPhone’s data fee; the 250 MB per month plan (combined upload and download) is just $14.99 per month. Will that suffice?

At first, I thought such a small amount of data laughable. I use my iPhone constantly, and must push vast amounts of data through it; with an iPad, I would surely use it even more. But I forgot that the iPhone tracks 3G usage separately from data sent over Wi-Fi until colleague Tom Negrino noted so in Twitter.

This prompted me to check my usage, which you can do in the Settings app by tapping General > Usage, and then scrolling down to the Cellular Network Data section and adding the two numbers there. As far as I can tell, I haven’t reset the phone’s usage statistics: I’ve used a combined total of 1.9 GB over 7 months or about 270 MB per month, just over the limit. I checked my AT&T account to see how much I used in January, a month in which I traveled with the iPhone and no laptop – just 150 MB total. Some research pegs average iPhone 3G usage at 500 MB per month. [And I’ve used just 589 MB since purchasing the iPhone 3GS in July 2009, well under the 250 MB per month limit. -Adam] 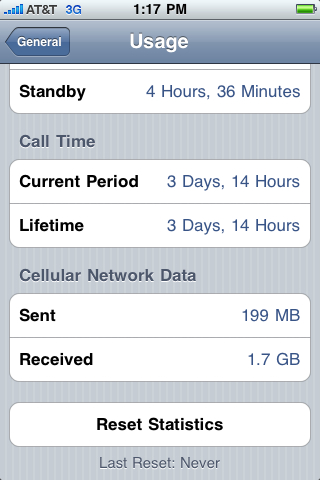 Neither AT&T nor Apple has said what will happen if you go over the 250 MB limit in a month. A rational approach would be simply to charge you $29.99 for that month and give you unlimited data for the rest of the month, but rational approaches have no role in the cellular industry – unless Apple has insisted on that as part of its continuing networking deal with AT&T. (The iPad could work on T-Mobile’s network in the United States, but not at 3G speeds, as the iPad doesn’t include the specific frequencies used by T-Mobile for 3G networking.)

One of our readers pointed out that Steve Jobs had said the AT&T plans would be prepaid; that’s in contrast to so-called postpaid plans. A postpaid plan requires that you pay for monthly service in the month before you use that service, but allows you to rack up additional usage and fees which are billed in the subsequent month. Prepaid service, by contrast, lets you use only the services that you have paid for, protecting you from additional fees. (Postpaid relies on credit checks and credit cards; prepaid typically allows many methods of payment, and delivers only up to the precise service paid for in advance.)

If AT&T is charging on what it calls a prepaid basis, but will bill for overages, that could get pricey. Most cellular carriers charge in increments of 5 cents per MB – $50 per GB! – for plans that have limits. A few carriers warn customers via texts, email messages, and sometimes phone calls as the data limit is approached. Without a cutoff, warnings, or a bump to the unlimited plan, expect customer horror stories to abound in the first few months after the iPad ships as people unknowingly rack up huge data bills.

AT&T will include free Wi-Fi access at its 20,000-plus hotspots as part of both of the iPad 3G plans, and I’m sure I’ve used my iPhone plenty at Starbucks and other free locations, as well as over my home and office Wi-Fi networks. (McDonalds’ is now entirely free for everyone, and represents nearly 12,000 of AT&T’s 20,000 locations, by the way; see “Find Free and Inexpensive Wi-Fi,” 23 December 2009.)

Wi-Fi is also being widely installed for commuters, often at no cost or as part of a low-cost plan. This includes trains, ferries, buses, and, one day, the BART system in the San Francisco Bay Area. Most airports are already included in AT&T’s network through roaming agreements.

If I were to buy an iPad, I would lean toward spending another $129 to get a 3G flavor just for the advantage of having access, when I need it, everywhere I go. The fact that I haven’t been overusing my iPhone’s 3G plan is useful to know. To make the $14.99 plan work, I’d just have to be slightly more careful about watching the meter.

Comments About Can You Get By with 250 MB of Data Per Month?