I’ve been keeping an eye on the Bumptop operating system ever since its founder, Anand Agarawala, presented it in a TED 2007 video. Bumptop is a desktop replacement which creates a virtual 3D workspace, and gives files a physical presence within that space. Bumptop for Mac was released last week, so I finally had a chance to put it through its paces.

I’ve been hoping to use Bumptop to fix a gaping hole in the current Mac OS. Unfortunately, it remains as wide as ever, but with any luck, pointing out Bumptop’s one-point-oh flaws will either help bring these features to a future version, or spur some developer to solve the problem in some other way.

No Space Like Home — The issue is this: like many folks who spend most of their day in Mac OS X, I have a tendency to work on many projects simultaneously, each of which may have its own windows, files, and assorted random bits. Ideally, when I’m focusing on one project, all of the other stuff is squirreled away elsewhere so it’s not in the way, but, crucially, squirreled away does not mean closed. If the mood or my latent attention deficit disorder strikes, I want to be able to switch to another project for a few minutes, then bounce right back again.

Here’s how I organize Finder Spaces for this kind of work, after much trial and error. 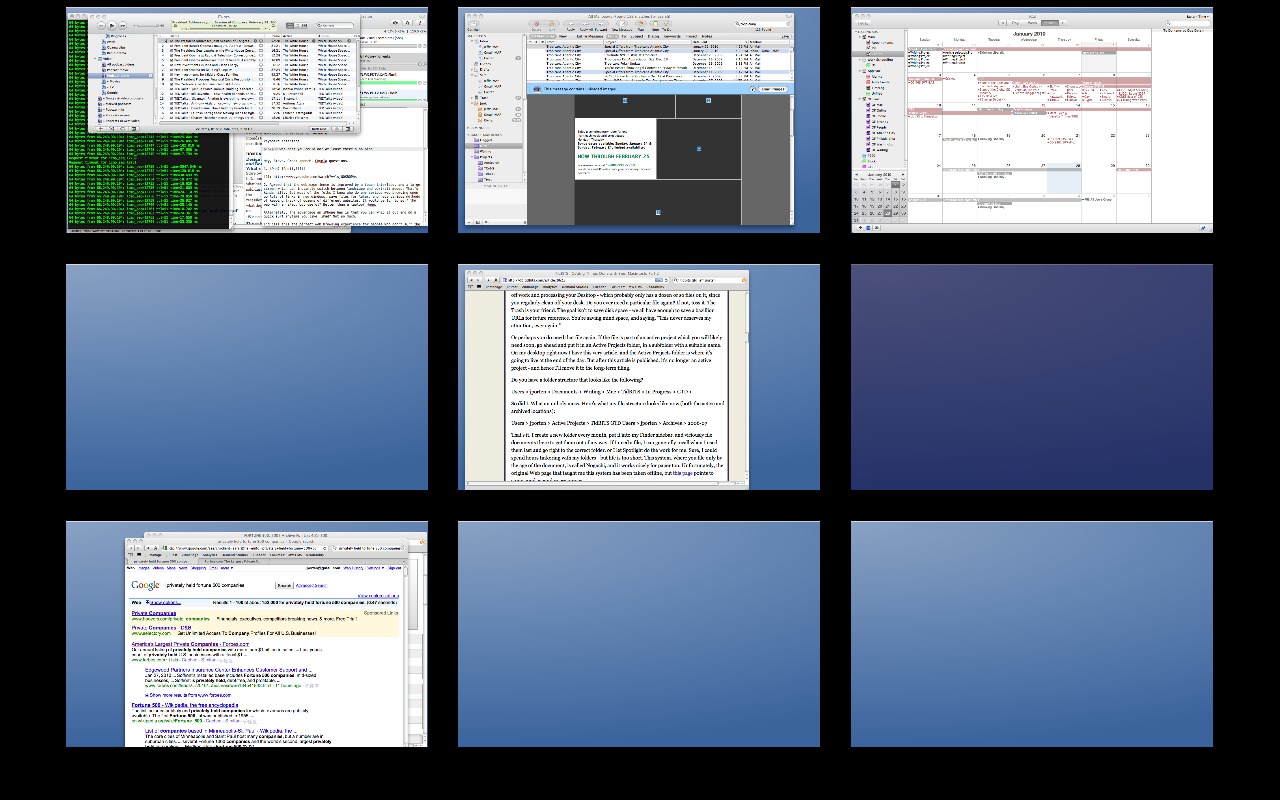 The center space, where Paul Lynde spent most of his time in Hollywood Squares, is also where I spend most of mine. Any project that is currently front-and-center is literally centered here. The top three spaces are always taken up by a standard selection of applications (Mail in space 2, iCal in space 3, and quick-access apps in space 1, including iTunes and Terminal windows). The other five spaces start their day as blank slates; if I find myself hopping down a bunny trail into a distraction, I gather up the windows I’ve opened and put them away elsewhere. A quick trip to Exposé gives me a heads-up view of what’s currently percolating.

I used to work in 12 spaces, or even 16 when I relied on the superior Virtue Desktops (which sadly died when it wasn’t upgraded for Tiger, and whose home page seems to have been taken over by spammers). But using nine spaces has two, er, virtues: I’m always adjacent to another workspace when I’m in the center space. And once I fill up all nine, well, it’s probably time to apply some focus.

You can see where this is going: with Spaces, I can group my windows together. But there’s no equivalent way of creating multiple Finder Desktops to go with these workspaces. Sure, I can arbitrarily create a folder structure, but as I’ve written before (see “Getting Things Done with Your Macintosh, Part 2,” 31 July 2006), the Desktop is special, and it’s damned silly that I can’t make it more useful. I can drag files around to make little piles, but new files always show up off to the right; in short, working with the Finder spatially always makes a big mess.

Bumptop has the potential to solve this problem, but hasn’t done it yet.

Bumping Your Desktop Files — I tried out Bumptop using the freeware version. When I first fired it up, all of my Desktop icons were jumbled up on one side; after using Bumptop’s “clean up” option, I had this screenshot as my canvas. 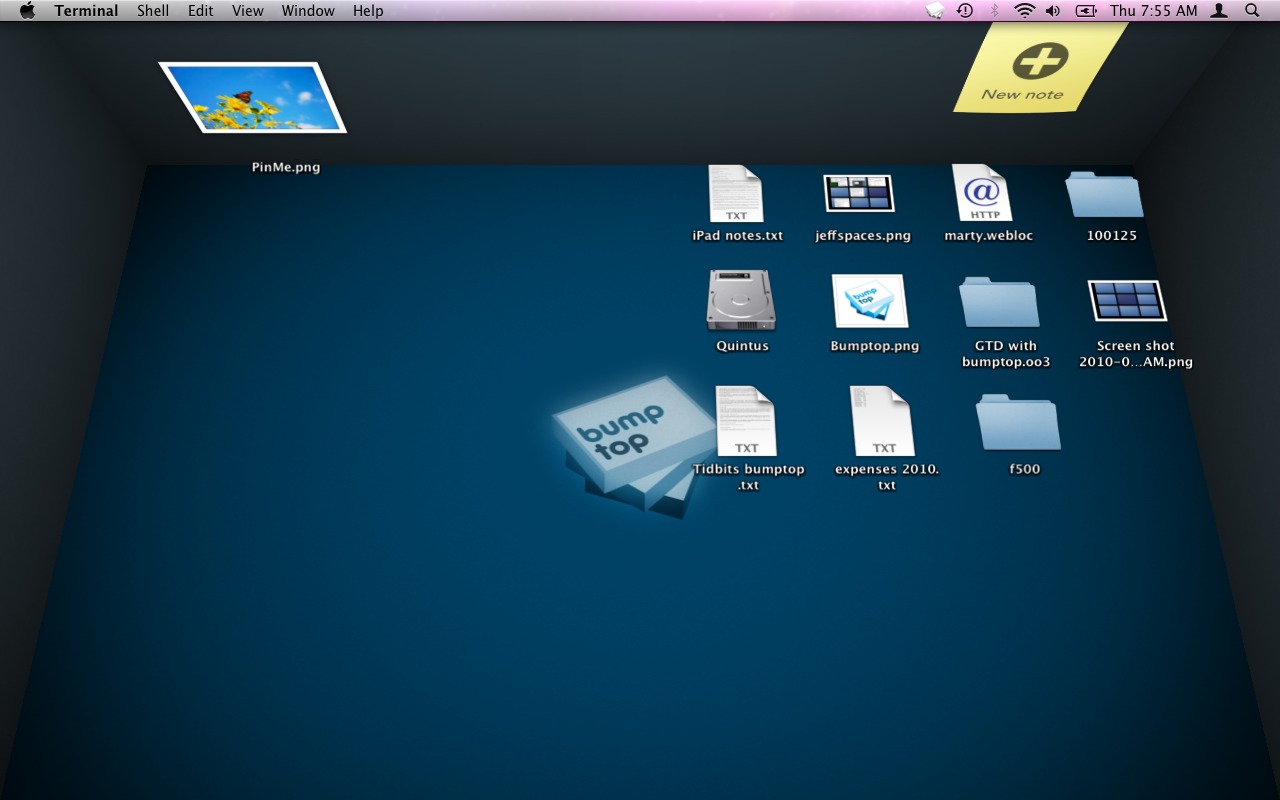 Right off the bat, there are some problems. First, the Desktop is a sacred space; in my opinion, no files should be there that aren’t work files. Why is my entire hard drive appearing there? The hard disk is hidden in my Finder preferences, but it can’t be hidden in Bumptop. Second, my Desktop files have specific colored labels that I’ve assigned; those are gone in Bumptop, and again, there’s no way to put them back.

After fiddling in Bumptop for a bit, I came up with this next layout: 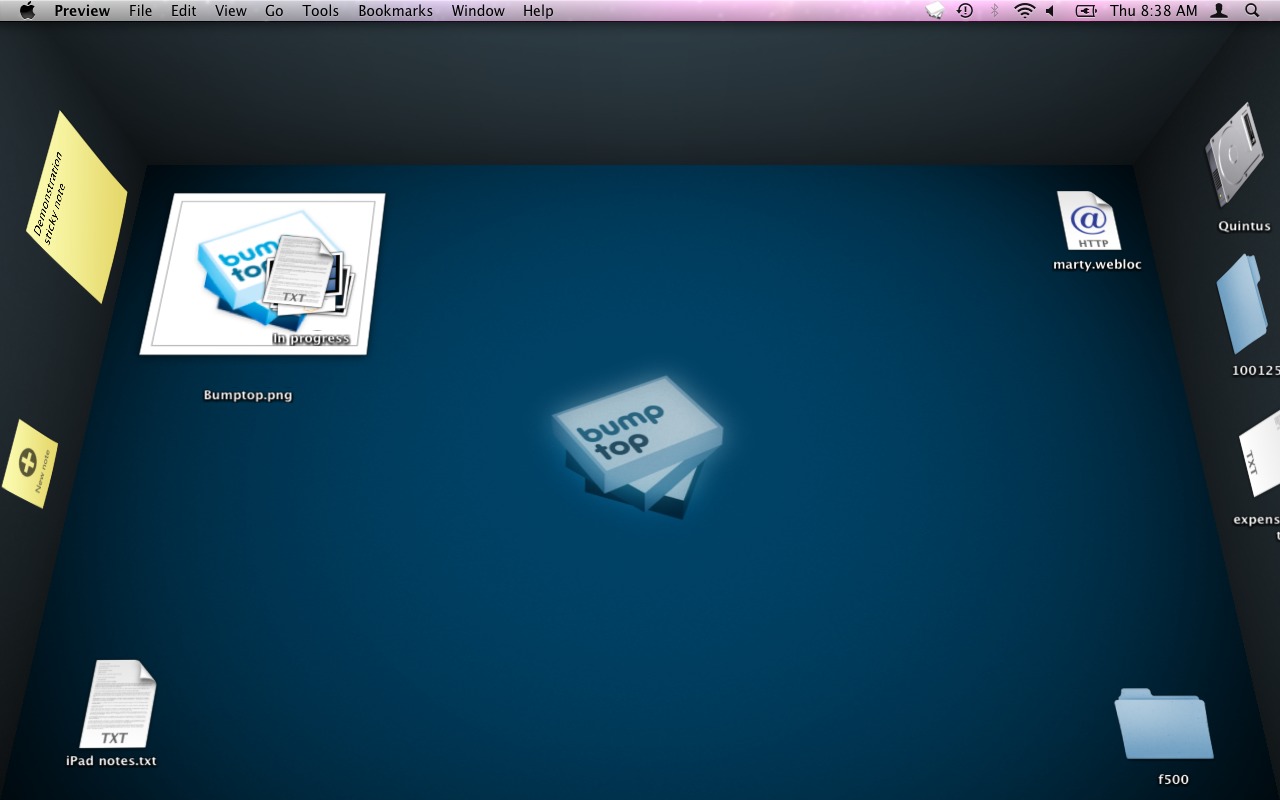 As you can see, Bumptop allows you to pin your icons to the walls of the virtual space, or rest them on the floor. I’ve added the files which normally live on my Desktop (and the drive icon which I can’t remove) to the right wall. Bumptop’s icon labels remain below the icons regardless of where they’re pinned, causing the unfortunate placement you see in the screenshot. I presume that moving the labels to match the perspective of the wall (or resizing the labels in any way) are future features, because you can’t do that now.

On the left wall, I’ve hung the Bumptop Stickies app – another icon which can’t be removed. In the $29 Bumptop Pro, you can create as many stickies as you like, but you’re limited to two in the freeware version. I’ve created a demo sticky and pasted it to the left wall; it has an advantage over standard text files in that it shows you its contents by default. But I’d rather have live previews of text files and PDFs, as with the graphics files.

On the virtual floor, I’ve laid out my files in a working spatial model. In the upper left, I’ve created a Bumptop “pile” of files which I’m using to write this article. Underneath it, I created a picture of the Bumptop icon and made it larger which makes it easier to associate files with particular projects. You can double-click a pile to display it in a Dock-like grid. Piles can also be given their own titles; I’ve titled this pile to indicate that it’s a work in progress (obviously, you could skip the large graphic approach and just label the pile after the project).

In the other corners, I have the beginnings of my other projects. The spatial layout makes it easy to toss files into particular areas, or stick them on the wall so as to come back to them later. Double-click on any wall or the floor and the viewpoint camera swings around to focus on it.

After that, though, the spatial metaphor breaks down, badly.

Space: The Final Frontier — Objects in Bumptop just don’t behave as you’d expect. There’s a much ballyhooed physics engine; fling a file into a corner and it will knock other files around with weight and momentum. So I tried to move my In Progress pile by dragging around the Bumptop icon it was “resting” upon. The result? The large icon takes the focus, and rises through the pile like a magic tablecloth eventually covering up all of the files. There’s no “send to back” (or bottom) command; you get your files back by dragging the picture away, then dragging your pile back on top. This is hard to imagine, but you can see what I mean in this video I
made.

Fiddling with these icons caused some interesting effects. A pile has height, so dropping the large icon on a pile generally causes it to drape over the pile. But after playing with all this for a while (trying to slide the picture under the pile), I managed to balance the large icon on the pile perfectly, which, unfortunately, prevented me from selecting either the icon or the pile individually after that.

I tried using Exposé and drag-and-drop to add new URLs to various working areas (it would be great to just throw a URL into the workspace of a given project). But all new dropped files end up in a heap in the center of the screen, and invariably, underneath other application windows. File organization remains a two-step process of create, then organize, just as it is with the Finder. Again, watch what I mean in this video.

To Boldly Go — Final verdict: I’m a bit surprised this is Bumptop 1.0. It behaves much more like a beta, and if anyone can make this software useful (as opposed to a rather cool demo of future technology), I’d be interested in hearing about it in the comments.

The real shame is that Agarawala is correct when he says in the TED video that we’ve been using the same crappy desktop metaphor for nearly 30 years. Files, folders, trash cans, and desktops were unleashed on the general public with the Apple Lisa in 1983, when hard drives held 10 MB, and organizing files manually was a crucial computing skill. Bumptop is an excellent idea for a new way of doing things.

Compare it to the other dominant (and far simpler) Apple metaphor: on the iPad and iPhone there are no files and folders. But you also can’t multitask or layer windows atop each other, even though that could be quite useful on an iPad. iPhone OS devices are too simple to accomplish many tasks we perform on computers, but that doesn’t mean that files, folders, and desktops are the best, or only, possible way of giving us the necessary flexibility.

Spaces and the Desktop are two rare examples of Apple’s interface falling short of obvious alternatives. It would be in keeping with Apple to introduce something insanely great, and perhaps radically different, in the next Big Cat. Bumptop suggests one such idea, and with any luck, a future version of Bumptop for Mac will provide an implementation which follows through on its promise.

Comments About (Not) Getting Things Done with Bumptop for Mac