I’ll admit, I was dismissive while watching Google’s launch of Google Buzz last week. The service, as explained and demonstrated, seemed like Google was trying to sell us on wanting something that many of us already have. The Google hammer was in search of something to strike, but we already have perfectly fine hammers and a ready supply of nails.

Buzz most closely resembles Facebook comment threads. Post a thought or a link or a photo, and your friends respond or mark that they “like” the thread. Buzz also has the asymmetry of Twitter: you follow people and, separately, people follow you; this is in contrast to Facebook’s symmetrical relationships, in which people join each other’s circles at the same time.

The idea behind Buzz is to create social networking within your existing Google universe, using Gmail as the hub. Google is rolling out Buzz gradually, and it hit my Gmail login a day after the launch.

Google’s hammer bent a lot of nails in the first few days of operation, revealing private information in public ways and freaking out plenty of users. Google is hammering more gently now and trying to straighten those nails as it backs off from its naive first efforts at creating an exponential network effect.

Exposing One’s Private Matters — When I started using Buzz, I wasn’t automatically connected to my contacts nor offered a chance to connect. My experience wasn’t the norm, however. Most people had their most frequent email and chat partners set up as part of their Buzz social network. Horrifically, this happened in at least some cases when Gmail users did not activate Buzz.

This created a great danger, because not only does your automatically generated social web see everyone you’re in regular contact with – whether or not that’s appropriate – but a privacy setting buried in a profile feature allowed anyone to see your list of contacts as well. For those who weren’t using Buzz or were unaware of this setting (as I was), private and sometimes deadly information – for those in repressive regimes – could have been widely exposed without the user’s knowledge.

By Sunday, Google had backed off from this approach entirely. New Buzz users will be presented with a list of common contacts with checkmarks next to each. You must uncheck the boxes to omit specific contacts, and then click Follow Selected People to activate Buzz. You can also click Turn Off Buzz to avoid enabling the feature in Gmail. 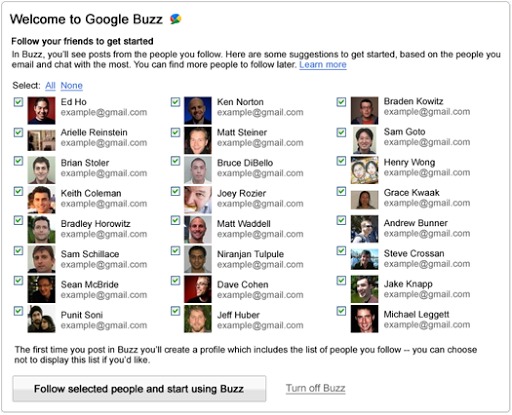 At present, it’s still tedious to turn off Buzz, although Google says it will improve this and add a Buzz-specific tab in Gmail settings. If you click Turn Off Buzz – a tiny link at the bottom of the Gmail page – you disable just the display of the Buzz link, but this doesn’t prevent people from following you or viewing who you follow. The Electronic Frontier Foundation recommends you avoid creating a Google profile in the first place or set it to private status – a
multi-step process that’s not at all obvious within Gmail.

Google was eager to build its network of interconnected users too fast, and should have consulted with privacy experts and anyone with any common sense outside the company.

Buzzing In — If Google’s privacy blunders don’t deter you, you can enable Buzz when Google makes the feature available to your account. The company is rolling the feature out in waves. When the feature is available, the next time you log into Gmail, you are presented with information that explains how to proceed.

After you’re set up, a new Buzz link appears beneath the Inbox link in the left navigation bar. When I clicked it, I saw a largely empty screen that invited me to get started, but this may have changed.

Once I was connected with a few other people, most of us floundering around trying to figure out if Buzz was worthwhile, I started some “buzzes,” which are really just individual threads, much like threaded email.

You can tie in Flickr and Twitter from the outside world, and Picasa and Google Reader from the Googleverse. Posting a photo to Flickr or Picasa, updating your Twitter status, or adding a link to a public section in Reader all add new Buzzes. (Google Buzz no longer automatically shares your publicly shared Picasa and Reader items; in some cases, people didn’t know these items were public, because of security-through-obscurity: if you didn’t know someone’s Gmail address, you wouldn’t have seen the “public” information.) 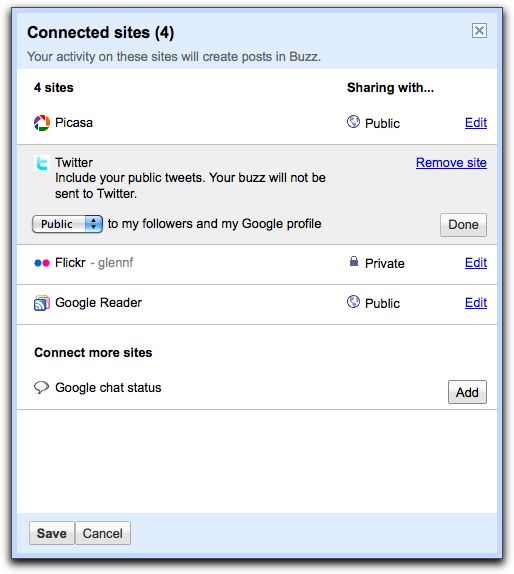 Buzz has a distinctly different approach from Twitter and Facebook. Buzz is (so far) on a single site without a third-party developer API, acting as an adjunct to the increasing universe of Gmail options, like Google Chat.

In contrast, Twitter and Facebook exist on their own and have their own sites, but third-party desktop and smartphone software extend access, and Twitter and Facebook’s authentication systems let you use your identity on those services to prove who you are for commenting and on other sites.

Buzz Up or Buzz Down — It’s far too soon to tell whether Buzz is a buzz kill or the next great thing. At launch, the only reason I can see to use it is to have a private or public conversation outside Facebook, but one that requires all participants to be Gmail users.

But Google’s privacy missteps around Buzz led me to revise my Google profile to set many previous public aspects of my identity to private status, remove all my followers and people I follow, and disable Buzz.

Comments About What’s the Google Buzz? Tell Me What’s A-Happening